The geographical location in Asia and a friendly relationship between the UAE, Dubai, and India had its positive fruitful outcome since ages in different life aspects on culturally different levels.
The Indian Cinema industry got its global reputation and stunned the world for decades. The most significant detail about Indian production is breath-taking performances. Bollywood got the world admiration for the contributors, makers, and superstars.

You would love to pass by the similar attractions:

In a praising step toward a huge industry contribution of India, Dubai constructed the International attraction over its land, Bollywood Parks Dubai, in a step to preserve and commemorate the huge artistic production of Bollywood.
Following the Them Park type of projects that highlights Dubai City like Ferrari World Theme Park, over 1.7 million sq. ft over the Dubai Parks and Resorts that embraces Legoland, Legoland Waterpark, and Motiongate Dubai, the world’s first Bollywood Park, Bollywood Parks was projected. 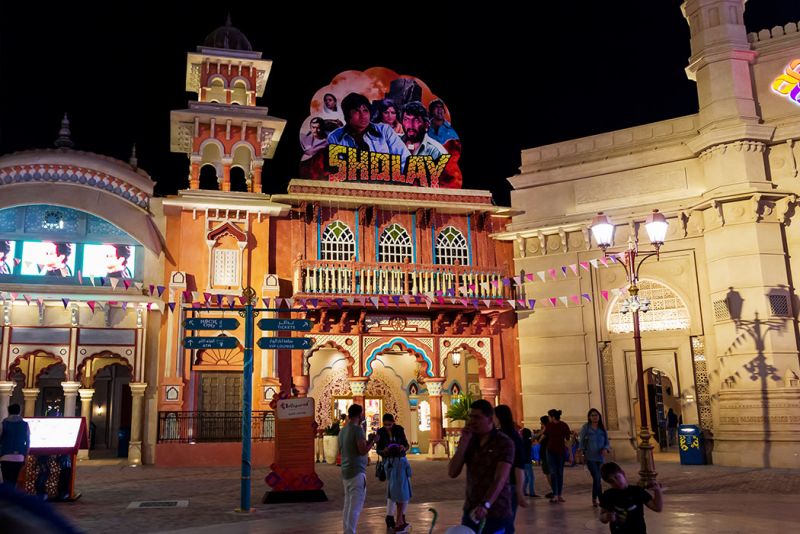 Bollywood Parks Dubai is divided into 5 major areas, named after:


The areas were classified to give you a different authentic experience from Bollywood movies and their characters. The traditional bright colors that normally related to India is the most noticeable feature the creative park designed couldn’t be missing, in addition to the lively 3D rides and movements inspired by Bollywood super-stars.
Let's step closer and Discover each area of the 5 Major sections of the Park;

The area takes you back to experience the 60th to 80th or to the Silver Screen Age. The major attraction and symbolic attraction of the area is ‘Crossroads’, presenting the glamorous performances on popular dance numbers.
The most significant feature of Bollywood Boulevard is the life-vivifying space with colors, entertainment, where people must enjoy in restaurants, and cafes. By the side of other activities include Rock On, Desi Emporium and Chalte Chalte.

The incomparable spirit of Mumbai, the famous and major Indian city. You needn’t fly from Dubai to India, like Mumbai streets, sightseeing, attractions, streets, shopping areas, and all that you need to explore in the city. If you are a Bollywood Cinema fan, then the iconic and classic Indian songs are filling the air of the area with their special performance.

Moving from the urban side of India, reaching the rural beauty at Rustic Ravine. Touching the real and authentic rural culture of India we watched in the movies Lagaan, Sholay, and Dabangg. As known about the Indian most common and local game cricket simulation by the side of other scenes are adding a special environment to the park.

Visiting Dubai Park experience couldn’t be at its best without passing by the ‘mini Ferris wheel’. The 3D simulation rides are extended with excitement to Sholay, through an interactive carousel acting Gabbar Singh scenes characters. Last but not least, give your juniors their time in ‘Lagaan – Champaner’s Cricket Carnival’. Don’t leave the area before watching the iconic police officer character of Chulbul Pandey or our lovely Salman Khan in the ‘Dabangg Stunt Spectacular’ show, fighting to rescue his beloved and her friends.

Carving Musicals?
Then it's your place in Bollywood Park!

Visit the Rajmahal Theatre and indulge your sensations with the Royalty environment of the most famous shows. Let's go back to the heart of the classical era of Bollywood presented in the ‘Jaan-e-Jigar’ show. For two hours of entertainment experience in the royal town ‘Ishqabad’. The drama simulation fantasy along with the music and dance gives you an unrepeatable experience in the park.
‘Stars on Steps’ is the upgraded level of thrill shot you will get at Royal Plaza of Bollywood Park Dubai. The musicals with performers and classical songs all inside the gorgeous temples and courtyards environments on the background give you a real vivid-experience.

Reaching the Peak of theatrical Bollywood Silver screen in Dubai Parks with the multi-sensory 4D simulation adventures with Bollywood masterpiece of the Indian superhero, Krrish. The flying scenes with the horizon panoramic background, and the spectacular landmarks.
Watching the Indian representation of the technology revolution effect and saving the world from its drawbacks shown in King Khan's movie Ra.1. Enjoy the movie scenes presented with your kind like moving inside the screen.
Going back to the real world with the Indian culture at Rangmanch and the traditional ‘Banjara’ dances by some nomadic tribes in south India along with the ‘Nautanki’ the local streets show.

Your visit to Bollywood Parks Dubai experience wouldn’t be at its best without the food pleasure with the local taste of the Indian dishes. Explore and Taste the best dishes that are satisfying every appetite through the different restaurants.

Find the Mughal-E-Azam in the Royal Plaza, and enjoy the most delicious local Mughlai dishes. The restaurants open their doors with the special menu Thursday to Saturday.

Touching the real city comes with its local-street food! If you agree then visit Spicy Dhaba in the Rustic Ravine area for the classical Punjabi famous ‘Dhaba’. The menu dishes are prepared in home-style spices, bread, and pickles.

Well, consider you are in a real movie shooting location, then the canteen area would be of the most entertaining spots you crave to visit. Find the western-style fast food, quick bites from the Studio Canteen. Get your Pizza, Burger, and other dishes with less Indian spices and delicious taste.

Bear in mind it's not Mumbai and we are not in Victoria Station Terminus, as the real essence of the spot will leave you with mixed feelings toward the reality of the place. Enjoy the authentic Indian fast food in the train-themed restaurant as if you become a passenger in the Mumbai railway.

Bollywood Parks Dubai lies close to the Jebel Ali area, which opens an easier way to the popular Dubai Outlet Village. Remember that your hotel location during Dubai Trips is a vital part and facility for your joy and fun. The nearest hotels would be Lapita Hotel Dubai and most of Dubai Marina and Palm Jumeirah hotels.