Burj Al Arab Facts: The hotel’s distinctive sail-shaped silhouette has made it an iconic symbol of modern Dubai. Often voted the world’s most luxurious hotel, the Burj Al Arab is one of the region’s most famous tourist landmarks. Know More About Burj Al Arab.

Experience beauty, luxury, and work of art by visiting one of the most exquisite Towers in Dubai. The Burj Al Arab is a masterpiece overlooking Dubai City was designed to resemble the sail of a ship. Moreover, it is one of the tallest hotels you can see in your Dubai Trips, located on what was referred to as the Miami Beach, Burj Al Arab stands on a reclaimed island that is 280 meters offshore from the former Chicago beach hotel.

Make youR Dubai Experience in the Best Quality and Pass by: 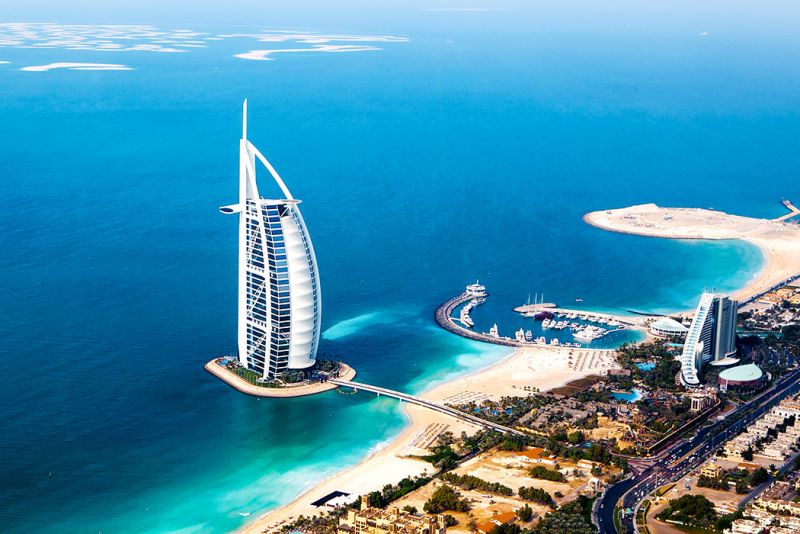 Designed by Tom Wright, the hotel was built with reference from Uruguayan architect Carlos Tot. Moreover, it also resembles the Vasco da Gama Tower in Portugal.

Burj Al Arab has genuinely made an iconic symbol of modern Dubai. The hotel has won several awards as the World's most Luxuries hotel. Well, you will be surprised by the high-end lifestyle the hotel has to offer.

The construction of the beautiful hotel kicked off in 1994 with over 2000 workers working together to make the project a success. Generally, the hotel was built to resemble a billowing spinnaker sail of J-class yacht. Five years later, it was opened, serving as one of the most exceptional locations in Dubai. 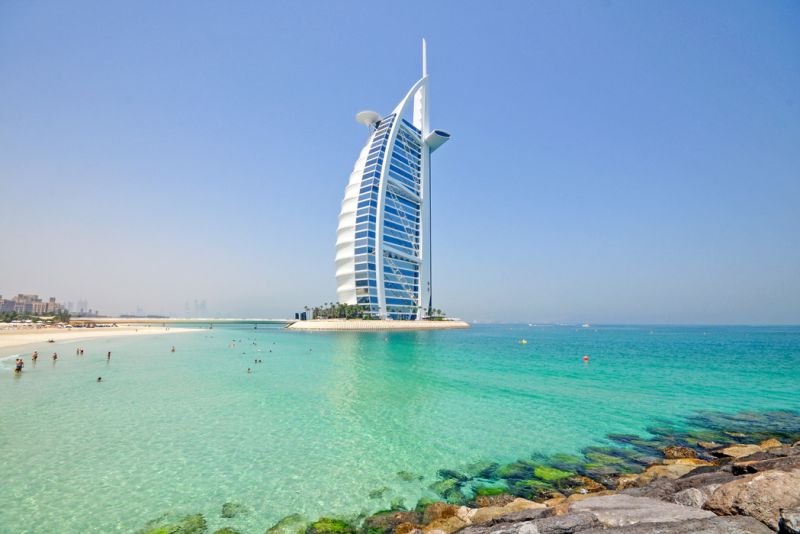 What makes the Burj Al Arab an outstanding hotel?

Here are surprising facts you should note about Burj Al Arab:

As the third tallest hotel in the World, Burj Al Arab measures 321meters tall. But most of its total height is covered with space. The general structure is well crafted to resemble the sail of a ship, located approximately 280 meters offshore from Jumeirah beach and connected to the land via a curving bridge. 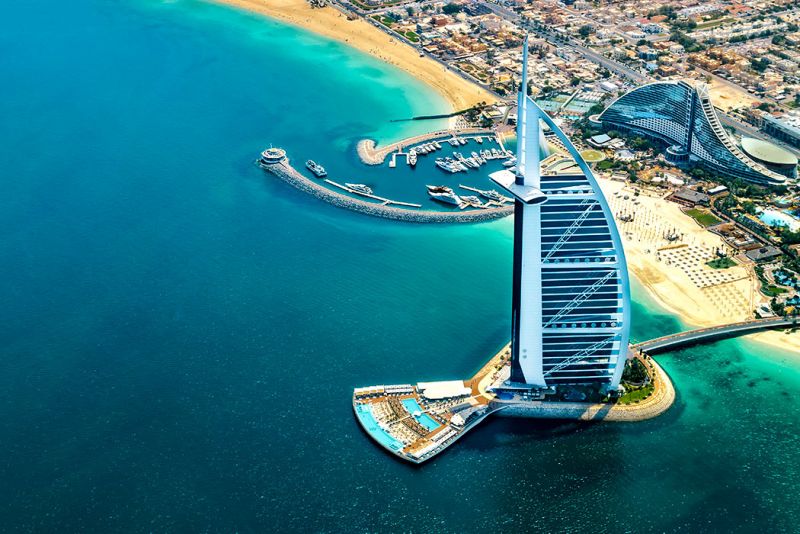 Given the complexity and luxurious lifestyle offered by this beautiful hotel, it has been rated as the World's only 7start hotel.

The masterpiece was initially designed to be an icon for Dubai. The architect behind the crafting of the design, Tom Wright came up with the plans and took up the challenge to come up with a World-class structure that portrays the outstanding image of Dubai.

The construction of the hotel started in 1994 with over 3000 companies and contractors not forgetting the magnificent 250 designers from the USA, UK and Dubai. Giving the island stability in the shore waters took two years and three years to build an excellent structure. By 1st of December 1999, the building was ready. 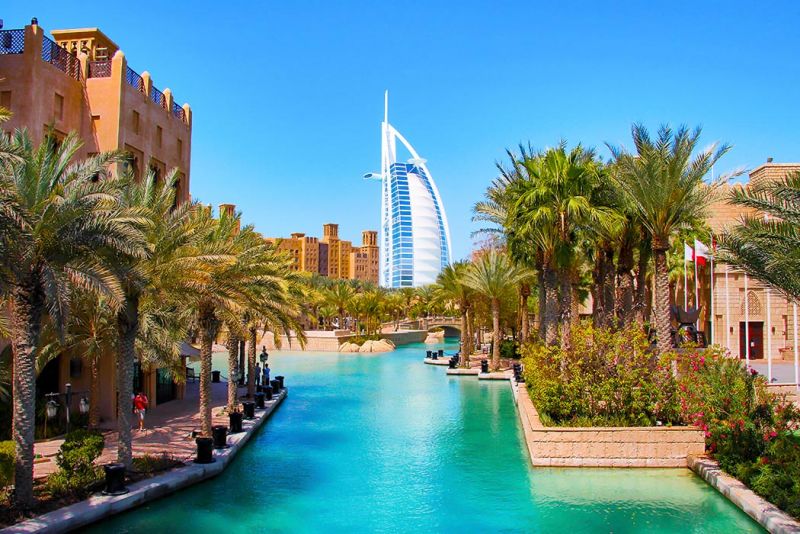 Generally, it took more than 60,000 cubic meters of concrete with more than 900 tons of steel to construct the tower.

The interior of the hotel is made with the finest materials. For instance, custom made carpets and rugs from South Africa and India, marble, which was sourced from Brazil and Italy and not forgetting the unique doors from Dubai.

A 24-carat gold leaf was used to decorate the interior of the building. It is approximated that the gold leaf measures 1,790 meters.

Even though Burj Arab is enormous, it only holds 28-double story floors, which contain more than 200 bedroom suites. The size of the suites varies from the smallest (169 square meters) to the largest (780 square meters). The most extensive Royal Suite is meant for a Maharaja. It has a cinema room, two master bathrooms, full-size Jacuzzis including five-head rain showers, a library including an exquisite majlis design lounge.

Inside the hotel, you will find the Atrium which provides a warm, natural light flanked with golden columns. At the middle is a fountain where water burst 42 meters into the air, a beautiful view that will leave your mouth wide open.

At the Burj Al Arab, you will find a unique waterfall that combines fibre optics and finely atomized water for a kaleidoscope effect. The Cascade waterfall is an elegantly crafted waterfall which has a well-choreographed movement that is unique and amusing to a curious mind.

Three aquariums are located on each side of the leading hotel lobby. The aquarium is said to have 50 different species of fish kept inside the tanks. Visitors can enjoy staring at these beautiful creatures since they are incredibly amusing.

At the ceiling of the Junsui lounge, you will observe 29,000 Swarovski crystals which are designed in the shape of a Milky Way.

You will be stunned with the Al Muntaha Restaurant, which is found 200 meters on top of the Persian Gulf. The restaurant provides a magnificent view of Dubai. Moreover, it has a panoramic elevator that is exceptionally luxurious.

In the same hotel, you will find the Al Mahara Restaurant. The restaurant is exceptionally luxurious with seawater aquarium that can hold up to 990,000 litres of seawater. Inside the aquarium is a female shark which has experienced four consistent years of births (this has never been documented on sharks before).

The Talise Spa provides utmost perfection with the beautiful experience of a high-end lifestyle. The hotel won the best luxury hotel spa back in 2014, winning the award consistently.

Last but not least, did you know that the terrace of Burj Al Arab was shipped from Finland to Dubai? This structure was constructed in a cruise ship before it was shipped to Dubai in six different pieces only to be assembled in Dubai.

Burj Al Arab offers Dubai's incredible culture, appearing in most movies like the Mission Impossible -Ghost. It is truly a stunning Hotel in Dubai and the rest of the World.