The impressive and provoking Sheikh Zayed Grand Mosque is one amongst the world’s largest mosques and therefore the just one that captures the unique interactions between Islam and other world cultures.

The founding father of the UAE, "Sheikh Zayed bin Sultan Al Nahyan" had a specific vision for this mosque, to include architectural styles from different Muslim civilizations and keep expanding diversity by creating a shelter that's welcoming and inspirational in its establishment.

The mosque’s architects were British, Italian and Emirati, with design ideas borrowed from parts of Turkey, Morocco, Pakistan and Egypt, among other Islamic countries. The tip results in a wide ranging, gleaming architectural marvel.

Sheikh Zayed Grand Mosque, which is found within the heart of the national capital, was constructed as a monument to consolidate Islamic culture, and to act as a recognized center for Islamic sciences. The mosque is the third largest within the world after those in Medina and Mecca in the Kingdom of Saudi Arabia, with 82 domes, four minarets (each 107 meter tall), and a section of twenty-two, 412 meter square.

With a diameter of 32.8 meters, the most important dome is unrivalled for size by the other mosque. Furthermore, the courtyard, which covers a 17,000-meter square, is the largest welcoming space at a mosque anywhere within the world. It contains around 1048 columns and is covered with a varied design.

Quite 3500 workers and 38 companies were involved within the process of making this wonder of Islamic art. After the primary stage, linking the concrete structure and foundations, the mosque was completed with the purest varieties of marble within the world, of Italian and Greek origin. In three varieties of Arabic calligraphy, verses from the Holy Quran are written. Yet as being a popular place for prayers, the mosque has become a landmark in the United Arab Emirates's capital and also the UAE.

Sounds AMAZING, right? But wait there’s more and more to know about this marvelous Mosque! 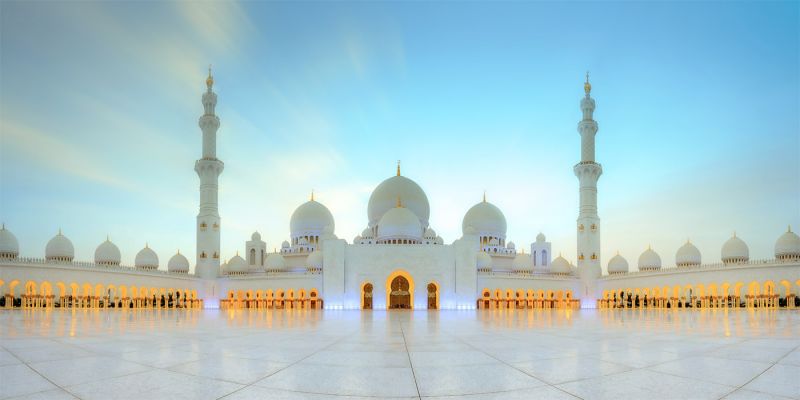 Maybe the principal outstanding element of the mosque is the collection of 82 domes in the same building, the biggest of which is built within the center of the largest prayer hall. The domes highlight pure white marble cladding, onion-shaped ‘crowns’, and crescent-shaped decorations enriched with gold-glass mosaic.

The mosque’s minarets combine Mameluke, Ottoman and Fatimid styles in an exceedingly manner that fuses diverse Islamic architectural styles into one expression of art and wonder. The use of natural multi-coloured marble creates novel artistic outcomes, including decorated crowned columns where the crowns don't seem to be located on the highest of the columns but at the underside. This extraordinary technique is innovative to Islamic architecture.

The colours of the walls, columns and therefore the carpet are harmonised in an exceedingly manner that transforms the mosque into an inventive masterpiece and a symphony of colors and shades. Another important feature is the artistic glass work. Mosaic, shaped as a form of sand-blasted crystal displays traditional Islamic designs of symmetry and harmony.

And it doesn’t stop here, Lets jump right in the exquisite details! 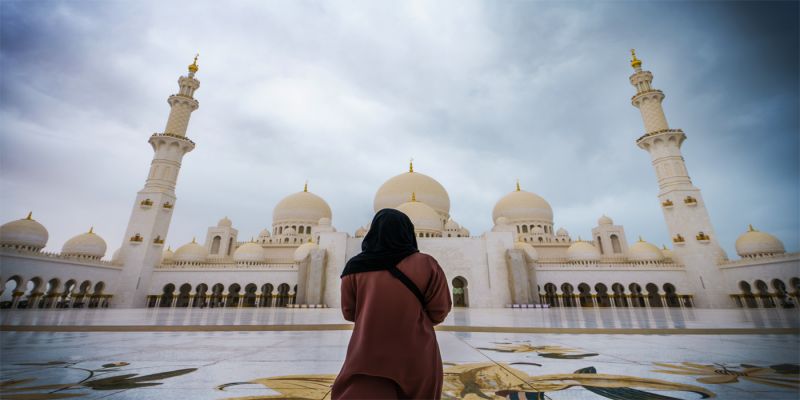 The prayer hall may be a work of art of its own. The precise detail put into every inch of the space will leave visitors in complete wonder, From floor to ceiling. The floors are covered by what's the world’s largest hand-knotted carpet.

Approximately 1,200 artisans were required to bring the vision of third generation carper maker, Dr Ali Khaliqi, to life. As impressive because the carpets are, looking up is simply as stunning. The mosque has seven crystal chandeliers altogether, however the biggest is found within the main prayer hall and weighs around 12 tons.

The smaller” chandeliers within the hall weigh 8 tons each. They were made with impressive detail and even have Swarovski crystal decorating them. The walls of the most prayer hall are again fabricated from marble and are covered in beautiful designs, together with the ceiling.

The most which faces Mecca where the Imam stands on the Pulpit or Menbar while conducting prayer, is decorated with the 99 names of Allah in Arabic. This can be an indication of enormous devotion and respect.

In general, the Sheikh Zayed Grand Mosque is an architectural work of art and surely the leading beautiful mosque within the United Arab Emirates. Every tourist should feast their eyes on this beautiful symbol of Islam after they visit the UAE.

There is no deficiency of mosques within the United Arab Emirates. Abu Dhabi alone has around 1,500 places of mosques for Islamic believers to attend. However, there's one mosque that stands out compared to the remainder.

Sheikh Zayed Grand Mosque is one of the eighth largest in the world and is remarkable not just for its size except for its architecture. With marble walls, tangled stonework, and crystal chandeliers, this mosque truly is extremely beautiful.

Why not give it a go!

If you are interested in traveling to UAE, check our top itineraries: