The City of Gold, Dubai, innovation, and development is fated to get no end!

Visiting Dubai is such taking a step toward a piece of paradise on Earth, makes your eyes hard to films from the beauty and constant development that make Dubai Tours would be one of your life's ultimate and most magnificent experiences.

Wondering what to do in Dubai?!

Here is your Guide to Dubai!
Dubai visit gives you the best when visiting its authntic hertitage with the modern highlights from attrctions and sightseeings with different essence over the land and sea of the Arabian Gulf. For a complete experince about Dubai, make sure passing by the coming:

As for Dubai Shopping Experience, you should find the treasures at

The construction of fantastic and well-structured builds requires the input of individuals with visionary ideas and a solid background in science. That's why the Dubai Burj Khalifa that highlights Dubai sky you can see in your fight and even though the Dhow Cruise, is a one of a kind building, thriving with exceptional beauty right from its construction and design you would explore in your Dubai Vacation. Known as the tallest tower in the world, Burj Khalifa also serves as one of the most exquisite attractions in Dubai, a prominent landmark that stands out from all other buildings. With an impressive height of 829.8m including the antenna, the building has been the tallest structure building ever since 2009 receiving numerous awards over the years.

It is a beautiful masterpiece by Adam Smith, who is a successful designer with an impressive reputation from the towers like the Willis Tower and Hyder Consulting. The building was designed with Islamic architecture, with a few challenges along the way, but eventually, the masterpiece now is an astonishing skyscraper highlighting Dubai City Sky along with the famous Burj Al Arab. 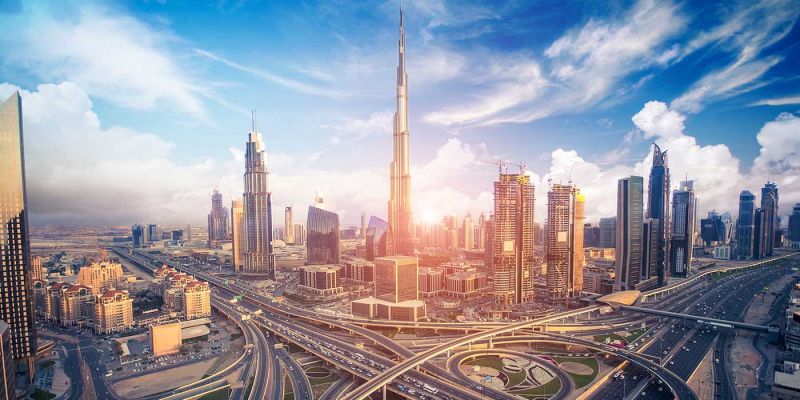 The construction of Burj Khalifa kicked off early January 2004 with everything set for the five years of development. The building was designed with the Islamic architecture with Adrian Smith as the brains behind the design. Most of the plan was derived from Tower Palace III, where the buttressed central core and wings were used to support the overall height of the tall building.

Samsung C&T was the team behind the construction of the building. This team from South Korea has an excellent reputation on other buildings like Taipei 101 and PETRONAS Twin Tower. In this project, Turner worked as the project manager, working strictly on the deadlines. 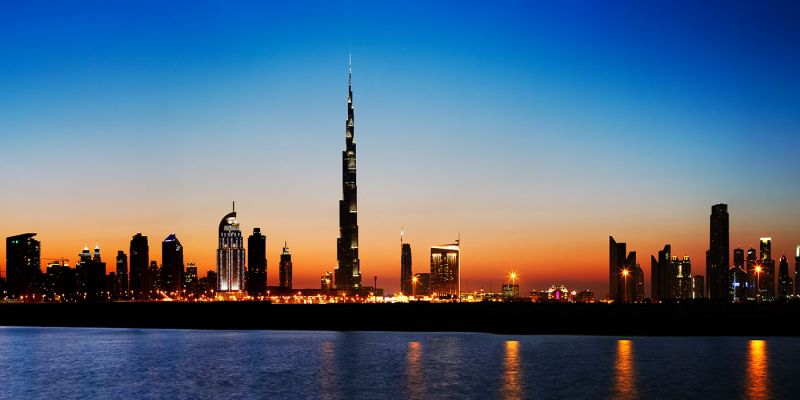 During construction, extraordinary mixes of concrete were used to ensure the building remains firm even in extreme pressure. It took some time and testing to come up with the right time and way of pouring the concrete, ensuring it's capable of supporting the entire weight of the building. But given the skill and input, everything fell into place.

The construction of the exterior was completed on 1st October 2009, and four months later the building was officially opened.

The main reason why this magnificent building was constructed was to gain more international recognition — promoting investment and tourism in Dubai. Dubai was to be seen as a spectacular location for tourists and potential investors.

In terms of design, the building exhibits one of the unique designs in the world. Generally, the spire of Burj Khalifa is made of more than 3500 tons of structural steel. Here is where the communications pieces of equipment are housed. Also, the spire itself can serve as a skyscraper since it’s a considerable competition for some buildings in Europe.

Its cladding system is made of more than 25000 reflective glass panels and not forgetting the aluminum and textured stainless steel spandrel panel.

The building is composed of 57 elevators and eight escalators which can accommodate up to 14 people in a cabin. So it’s relatively large, but with a speed of 10m/s, which is nothing compared to the 16.83m/s in the Taipei 101.

The water system in the building can accommodate 946,000 litres per day. On the other hand, the wastewater system uses gravity to discharge water from the floor drain, stormwater and many more.

The air conditioning system in the Burj Khalifa draws water from upper floors where the air is cooler compared to the ground. It is also designed to adapt to the changes in temperature. This system is also very beneficial to the nearby park thanks to the condensate collection system that supplies water.

Certainly, it costs a fortune to construct this excellent fountain system, but the outcome is hugely amusing. With 6,600 lights and 50 ravishing colored projectors, the Dubai fountain shoots water up to 150m into the air, along with classical Arabic and other exciting music to keep tourists amused. Moreover, it is choreographed as the world's second-largest fountain.

Experince Dubai Like Never Before, and Plan your All-Inclusive Dubai Tours Now!

The 124th floor features a computerized telescope, where visitors can observe the surrounding landscape. However, to reduce the number of sightseers in a day, the management allows only visitors with tickets to visit the location. 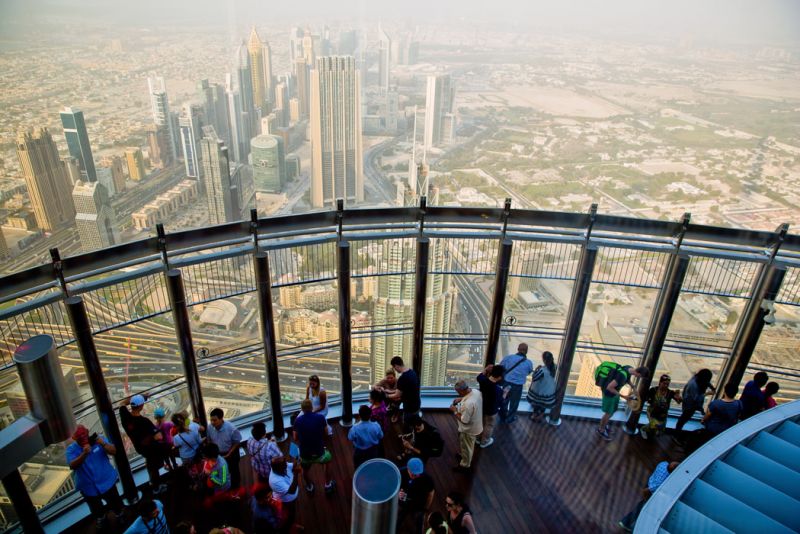 Designed by a group of highly skilled architects, the Burj Khalifa Park is flourishing with desert-based flowers, and at the center of the park, you will find the water room, which has a series of pools, and water jet fountains, offering a magnificent site.

In June 2010, the building received the best tall building Middle East and Africa award which was conducted by the council on tall buildings and urban habitat. In the same year, September Burj Khalifa won as the best project of the year which was at Middle East Architect Awards 2010.

In 2012, the building was awarded for excellence in engineering from the American Society of Heating, Refrigerating, and Air-Conditioning Engineers.

There are numerous awards the building has received over the years, describing its beauty and uniqueness. Certainly, Burj Khalifa is an incredible building.

Last but not least, it will only cost you US$ 36.75 to enjoy the incredible height from the observation deck. Experience the tallest building in the world, in greater heights from Dubai's tallest building.

The Opening Ceremony of Burj Khalifa

The opening of Burj Khalifa was held in January 2010. The ceremony featured a display of 10,000 fireworks, light beams projected on and around the tower, and further sound, light and water effects.

2011–2012, Burj Khalifa was fully illuminated in white, red, and green colors, drawing on the colors of the UAE national flag, through the fireworks display. The celebrations were also a salute to the nation. 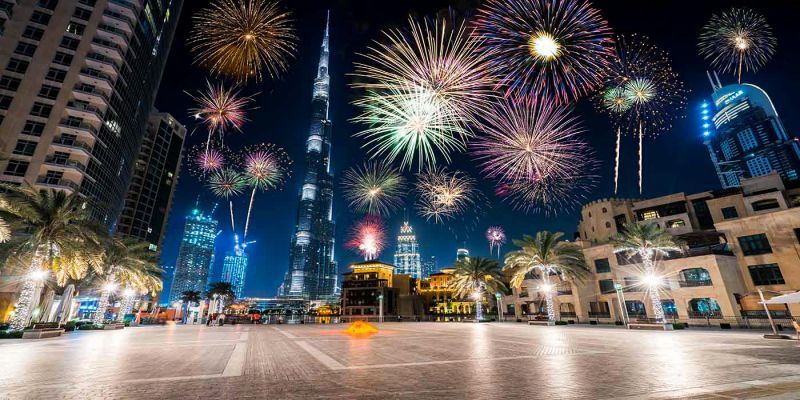 2012–2013, the fireworks display on Burj Khalifa, in a blaze of light and colour, the fireworks engulfed the tower, synchronized and choreographed to a live performance by the Prague Philharmonic Orchestra.

2013–2014, the Burj Khalifa and surrounding areas were the sites of a record-breaking fireworks display as part of the UAE's New Year celebrations, with a reported 400,000 fireworks being set off continuously for six minutes.

2014–2015, the Burj Khalifa was illuminated by an 828 m custom-built LED facade which was installed in the building where light shows were displayed followed by the fireworks.