The Sharjah Museum of Islamic Civilization is found at the historical heart of town on the Majarrah Waterfront, right the shore of the Sharjah Creek. it was opened in 2008 within the building of the previous Souq al-Majarrah which has been transformed into a state-of-the art museum.

Highlights from the museum's collection of 5,000 artefacts from most over the Islamic World, are on display in spacious galleries, together with special temporary exhibitions. The didactic presentation of the exhibits still because the intructive models and wall charts provide a deeper understanding of the cultural and scientific achievements of the Islamic civilization in its historical and non secular context. The museum’s predecessor was the Islamic Museum, established in 1996 and located within the Heritage Area until 2007.

The Islamic Museum was first inaugurated within the Heritage Area on the sixth of November 1996.This museum was then modified, under the management of His Highness Sheikh Dr. Sultan bin Muhammad Al Qasimi, Supreme councillor and Ruler of Sharjah, to the normal Souq Al Majarrah (opened as a souq in 1987).

The museum was then reopened under the name "Sharjah Museum of Islamic Civilization" on the sixth of June 2008, after transferring the re-interpreted and re-displayed collections from the previous museum to the present redesigned state-of-the-art museum.

Why you need to visit the museum

The museum is a very important cultural and touristic landmark. it's unique for its location along the Al-Majarrah Waterfront within the Heart of Sharjah and for being the primary of its kind within the United Arab Emirates.

The museum displays thousands of unique artifacts that highlight the good Islamic Civilization from the primary century AH (7 AD) to the fourteenth century AH (20 AD). Visitors to the museum can explore the discoveries and inventions of Muslim scholars throughout the traditional Islamic history.

The museum's holdings of Islamic arts and culture best over five thousand different pieces collected from several parts of the Islamic world, and performed per their periods in six separated galleries. Visitors can enjoy learning about the magnificent Islamic history, art, culture, sciences, and Islamic discoveries. 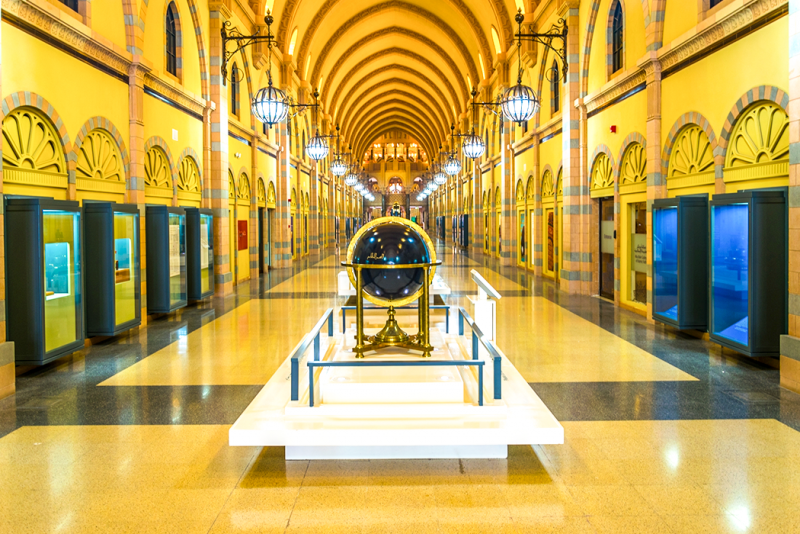 The museum comprises of seven spacious galleries and display areas; its permanent collection is organised as follows:

This gallery is devoted to introducing the principles of Islam and therefore the Holy Qur’an. Here, the five pillars of Islam, the foundations of the Islamic faith, are presented and therefore the rituals of Hajj and Umrah are defined. In this gallery visitors can observe anthropomorphic parts of the Ka’aba and original parts of the important clothes of the Ka’aba, the “Kiswah”, unique historical Quran translations still as original figures and pictures of mosques and their design from different parts of the Islamic world and Europe.

This gallery displays a large range of Islamic artefacts like pottery, metalwork, woodcarving, manuscripts and textiles that date to 1st ــ 7th centuries AH (7th ــ 13th centuries AD). That early period marked the expansion of Islamic civilization and culture from the Arabian Peninsula to the Atlantic within the West and also the borders of China within the East, leading to the formation of a singular cultural blend comprising ancient Hellenistic and Persian cultures together with the religious values of the rising Islamic power. Gradually, a brand new design style emerged mixing the Arab-Islamic style with geometric and floral decoration.

This gallery features important Islamic artworks dating back to 7th – 13th centuries AH (12th – 19th centuries AD). They include objects of post-Mongol invasion of the eastern Islamic world within the 13th century, moreover as a selective collection depicting the Ottoman, Safavid and Mughal civilizations, the three main competing empires that dominated the Islamic world at the time, and based within the Mediterranean, Iran and South Asia. That period witnessed a stimulating flourishing of worldwide trade and economic process similarly as a marked expansion of artistic, cultural and non secular cross-pollination between different communities.

These galleries show mainly Islamic arts, crafts and weapons used between 13th – 14th centuries AH (19th – 20th centuries AD). That time was identified by an introduction of European ideas and wares. Local markets, artisans and craftsmen were in fierce competition with their Western peers who offered cheaper and mass-produced goods. Local arts and crafts began to address tourists’ tastes and demands, resulting in visible changes in their finished styling and quality. Traditional weapons continued to be popular among local populations and tourists alike; they were not utilized in combat, but rather in ceremonial parades, as a part of male formal costumes, as honorable gifts to dignitaries or indeed as collectible artefacts in their title.

The museum’s leading early Islamic coin collections are presented within the atrium outside the Al Majarrah Gallery. Visitors can study the history and emergence of those coins through these outstanding displays.

In this gallery, the museum receives temporary world-class exhibitions and carnivals twice a year.

Sharjah Museum of Islamic Civilization features seven galleries covering two levels. The ground-floor galleries cover aspects of the Islamic faith and therefore the achievements of Arab scientists and astronomers. The upper floors offer a chronological overview of Islamic arts and crafts, including textiles and jewellery.