The architectural wealth of Dubai never stopped on one side or aspect. The modern heritage of the Imperial City of Gold, Dubai, reached the cultural, civil, touristic attractions more within the different deals of Dubai Trips. One of the significant architectural master-structures highlighting the city horizon are:

The architectural revolution did not fill the Land space only, but also had its great contribution over the sea. During your Dubai vacation, remember to explore the stunning maritime attractions including Dubai Marina, The Palm Jumeirah island, The World Dubai Islands, and the modern Bluewaters Islands.

On the very rich contribution of Dubai ruler, Sheikh Mohammed bin Rashid Al Maktoum, on Dubai city development, the project of building artificial islands was inaugurated in February 2013.
Bluewaters Islands are a cluster of entertainment center over 500 meters (1,600 ft). The artificial island was built off Palm Jumeirah beach coastline, close to Dubai Marina in the heart of Dubai.
The Island still connected to the Dubai Land through a bridge to Sheikh Zayed Road.

The new project was digging on a reclaimed land under the supervision of the talented architect Van Oord of Meraas Holdings, which showed its spectacular work previously on Palm Jumeirah Island. The project was set under a budget of 1.6 billion USD to comprise the Blurwaters Island and Dubai Eye together. The actual man-work on the Bluewaters Island project began in May 2013 and the opening was set in November 2018 after a continuous 5 years of work. Bluewaters Island attraction is expected to attract more than 3 million visitors annually.

The park of Bluewaters Island combined a wide range of facilities from entertainment to hospitality, residential, leisure, hotels, beach clubs, and retail zones. The residential areas are working on the driverless transport system and including two five-star hotels directly opened to the beach. On the shopping aspect, the shops and retails around 200 stores and outlets cover all your needs all are on the ground level of the residential buildings. The linking bridge between Bluewaters Island and Jumeirah Beach is an entertaining 300 meters way. 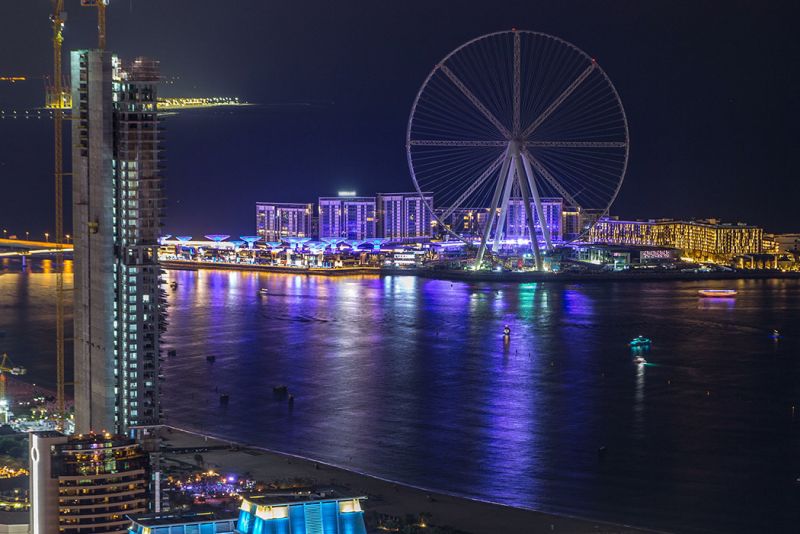 Dubai Eye, Ain Dubai in Arabic, the center-piece of Bluewaters Island the world's largest observation wheel gives an open view to the Gulf.
Ain Dubai is a giant Ferris Wheel in 210-meter (689 ft) tall. The structure of the wheel was projected to be the tallest of its type in the world after Las Vegas Ferris wheel and New York Wheel.

Dubai Eye work was managed and lead by Hyundai Contracting and Starneth Engineering. The work was planned to begin in June 2013 but until May 2015 the work wasn’t actually onset. Concerning the finishing date and due to the beginning delay and several delays, it was shifted to the end of 2020.

The Dubai Eye wheel structure is designed and structured to carry up to 1400 visitors and more. The view perfectly opens to Dubai Marina Walk and other landmarks of Dubai in a magnificent panoramic view.
The ground level of the wheel structure is planned to serve as an entertainment area with 80-metre (260 ft) LED screen as an advertisement screen.