Why you should visit Morocco?

from
$52
Morocco is a traveler’s haven for those seeking an experience that combines historical beauty, natural wonders, and rich culture. The North African country, located at the intersection of Africa and Europe is full of the most amazing things to do and the most incredible things to see. Morocco has a lot to offer, for every kind of traveler. If you are a history buff, visiting the Imperial Cities will strike your amazement.

If you enjoy beaches and water adventure sports, you should visit the Moroccan coastal towns. You can also take a look at some of Morocco’s off-beat destinations to give yourself a soothing and relaxing time, away from the bustle. It really is difficult to pinpoint the best things to do in Morocco,

Here are ten great reasons to make Morocco your next Vacation Destination:

Morocco is one of the 3 countries have coastlines on both the Atlantic ocean & Mediterranean sea along with Spain & France. You may enjoy your family or honeymoon vacation in any of the brilliant seaside cities in Morocco - Essaouira, Tangier, Casablanca, or Agadir. You may also enjoy the different types of water sports, from March to Mid September when the weather is very moderate.

Moroccan cuisine is known for various dishes and Recipes which are richly flavored with herbals and spices, various between chicken, meat & fish.  The most popular dishes in Morocco are the Couscous and the tagine, you shouldn’t miss this nice experience when traveling to Morocco.

Riad is an Arabic word means garden, the Riad is the local old houses or palaces for Moroccan people. The Riad is a house with a courtyard or garden in the center surrounded by trees. Later on, these houses were turned into hotels and opened for tourists to stay in.  Normally the Riad contains a few numbers of rooms so you will feel privacy while staying there as if you are staying in your own palace.

Dades Valley: A hiker’s delight, the Dades Valley is a scenic haunt for hiking through the raw wonders of nature. You can see the snow-peaked Atlas Mountains in the distance, and different sights (like orchards and tiny villages) peeking out at you from amidst the gorge.
Read more: Your Guide to Accommodation in Morocco

Morocco is a country with a rich culture and civilization, when you visit Morocco you will have the chance to discover the four royal cities :

What we call a ‘detox town’, Chefchaouen is an ideal place for you to relax if you’ve already seen the bustle of the main tourist cities of Morocco. Chefchaouen does not have many standalone attractions of its own, but its remarkable feature is that it has been painted blue, giving it the name ‘the Blue Pearl of Morocco’, and offering you a calming sensation when you visit. It is a great place for some lazy strolling through the beautiful lanes.

Visiting the small bazaars and the souks can give you access to products from consumables (like fruits and vegetables) to jewelry and arts and crafts. To further soothe yourself, you can visit a local Hammam, where you can experience a traditional Moroccan massage. If you feel like learning about the history of the city, you can visit the Kasbah Museum.

The economical capital & the largest city in Morocco. The main airport of Mohamed V is situated in Casablanca as well as the mosque of Mohamed V which minaret is considered the largest one in the world. The Hassan II Mosque: Spoken of by many-a traveler, the Hassan II Mosque is situated in Casablanca, a port hub and the largest Moroccan city. The mosque itself is one that was completed in 1993 and is one of the most modern famous structures in Morocco.

The mosque is symbolic of the rich Moroccan culture, visible through intricately carved marble pieces, colorful tile-mosaics; paying tribute to the rich Islamic culture of Morocco, while also blending in more contemporary Moroccan arts and craftsmanship. It is widely known that the intricate detailing of the artistry took 10,000 artisans to complete!

The political capital. The current capital of Morocco, Rabat is situated on the shores of the Atlantic Ocean and is extremely beautiful, with attractions boasting of its Islamic and French-colonial heritage. A few attractions in Rabat are the royal fort, the Hasan Tower, and the Chellah. From mosques to cathedrals with botanical gardens, palaces, and delicious food in between, Rabat is definitely worth a visit!

One of the nicest cities in Morocco where you can visit  Al- Karaouine University, the oldest university in the world. We’ve mentioned three of the four Imperial Cities and the fourth one does not fail to delight just like the others. The beauty of Fes lies in its chaos, and it hasn’t been cleaned up for tourists to see as the rest of the Imperial Cities.

Its cultural beauty literally seems to lie in chaos and while it’s not as clean as the rest of the cities, it is glorious nonetheless. The old-world atmosphere with its traditional souks, vibrant streets, and incredibly decorated religious schools make Fes a place of intrigue for travelers from all around the world!

We wrote a complete article about the glory of the Imperial City of Meknes, but if you find yourself wanting to explore different parts of Morocco and wish to visit Meknes for a shorter period of time, then one thing you should definitely see in Meknes is the Bab al-Mansour. A grand gateway, the Bab al-Mansour was never meant to be functional.

It was a tourist attraction, even back when it was built and it has retained its beauty in the form of amazing design and architecture that is characteristic of Morocco. It is a majestic reminder of Meknes as the capital of Morocco and is one of Morocco’s grandest and best-preserved gateways.

Volubilis: This has been deemed a ‘feast’ for lovers of history. Volubilis is an ancient Romanic ruin, situated atop a hill, looming up above the countryside. Reminiscent of the lost glory of the Roman empire, Volubilis can be visited as a day trip from the Imperial City of Meknes or of Fes.

The most vital city in Morocco with various kinds of leisure among cultural sights, entertainment, desert adventure, as well as the shopping experience Djamaa El Fanaa square. Are you surprised that this city didn’t appear at the top of this list? We totally get why! If it wasn’t for so many of Morocco’s other beautiful locations, this popular destination would definitely be number 1; and tourists from all around the world can testify to it! The most famous Moroccan city, Marrakesh has captured the attention of people worldwide, making it quite a crowded spot. However, crowded or not, the city is incredible.

One of the four Imperial Cities, Marrakesh is well-known for its medina (the old city) and the colorful maze-like alleyways. With the Koutoubia Mosque, the Bahia Palace, Saadian's Tombs, and the Menara Gardens (amongst a few other grand attractions), Marrakesh has a lot to offer to history buffs.

A charming old seaside-town, Essaouira offers a delightful view of colorful fishing boats, fort walls, and winding lanes inside the town. Essaouira has some delicious seafood options and some cute villages on its outskirts that you can visit by walking along the beaches. 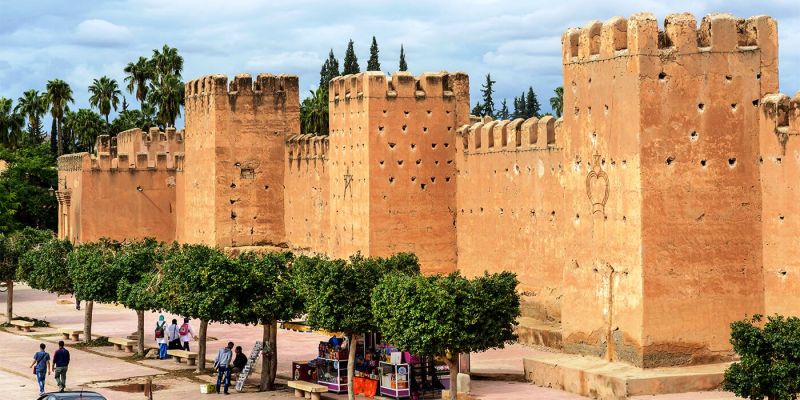 The Moroccan Sahara desert is a part of the Northern Africa desert which is considered the third largest desert in the world. discover the magic of the desert by visiting the Atlas Mountains where you can trek and camp below the stars.

Amongst other notable things to see in Morocco, are the desserts of Erg Chebbi, the Draa Valley, the Rif Mountains and the city of Tetouan; and even more. Morocco is certainly an enchanting destination that will make you want to go back and explore every corner!

Ouarzazate city with its captivating desert scenery is considered the capital of the south. In Quarzazate, you will have the chance to visit Ait Ben Haddou, a protected Unesco World Heritage Site, in which a large number of movies have been filmed there.

Ait Ben Haddou, A UNESCO World-Heritage site located within the Moroccan islands, the Ait Ben Haddou is a fort (kasbah), appearing like a fairy-tale palace with its orange turrets and twisty lanes. It is so picturesque that it has caught the fancy of travelers and filmmakers (Hollywood) alike. A great feature is that you can sleep at the kasbah too; although there is no electricity within the fort.

Depending on when and where is your visit, expect to find music, dance, or a traditional festival. When you are planning your vacation, try to synchronize with one of Morocco’s festivals, this is a very good way to experience the prosperous heritage in Morocco.

Morocco is famous for its souks “ markets “ where you can find a vast collection of fine goods, food, fruits, spices & leather. You would be able also to find malls with European & International brands. The shopkeepers will always welcome you with a nice smile and a cup of mint-tea.

The weather in Morocco is very moderate during most parts of the year. Spring season (April and May) and autumn (September and October), are the most favorable times to tour Morocco. The summer season is the best time for a beach holiday on the Mediterranean Sea and the Atlantic Ocean while the Winter is perfect to visit the south with a nice experience for hiking the Atlas mountains in snow conditions.

Moroccans are one of the most friendly and hospitable people you would meet, they are very simple & genuine and always love to welcome their visitors with a lovely smile with a cup of mint tea, the most popular drink in Morocco. 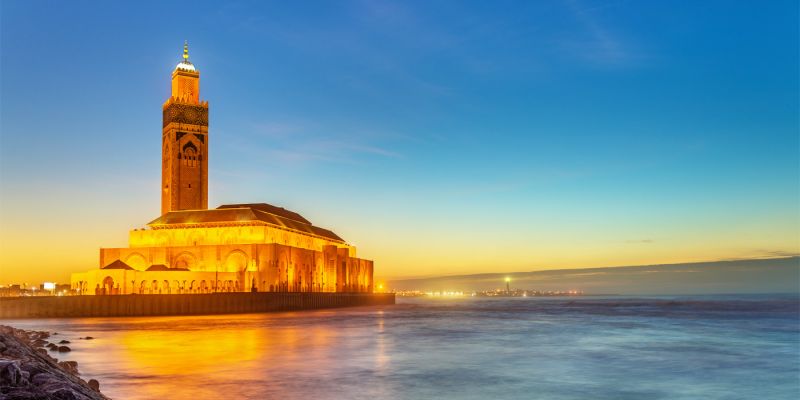 Morocco Visas: All You Need to Know

Why you should visit Morocco?

A Full Guide about Accommodation in Morocco