Traditionally your exploration of Fez, the medina should start at the Bab Boujlloud Gate. The first monument to visit is the vast Bou Inania medersa, with its cedar woodwork, its sculptured stucco, and its marble and onyx decoration. As you continue along Talaa Kebira Street (big climb), you will particularly admire the Tijani zaouïa (zaouïa, the sanctuary of a religious brotherhood) and the instrument makers' souk before arriving at the mzara (shrine) of the ancient sovereign Moulay Idriss situated at the place where he took the decision to build the town.

Once you have passed the babouche vendors, you arrive in En-Nejjarine Square and the cabinetmakers' souk. The magnificently carved foundouk (caravanserai) on the square houses the Museum of Wooden Arts and Crafts. The kissaria (covered market), where jewelry and fine fabrics are on sale, is nearby (it is shut at night). Next to it, you can admire the most visited and revered attraction in Fès: the zaouïa of Moulay Idriss, founder of the town. 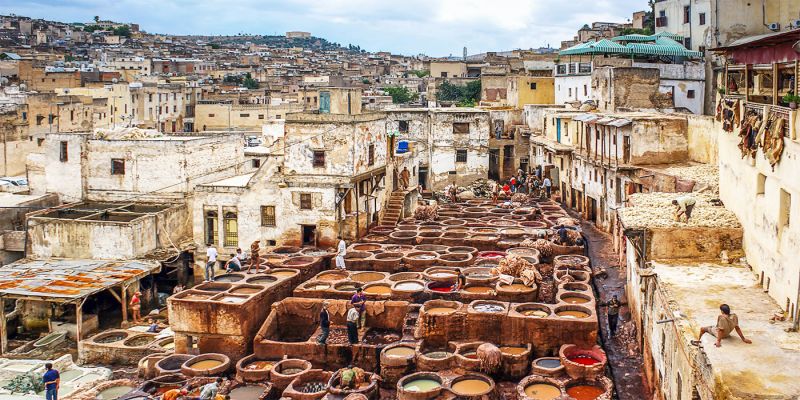 Your walk continues on to Es-Seffarine Square, the coppersmith square, and then to the tanners' quarter situated just before the Andalusian quarter with its mosque and the Es-Sahrij medersa. Your walk ends at the old Dar Batha Palace whose Arabo-Andalusian style makes it a museum to visit absolutely. As it is specialized in the arts and traditions of Fès, it gives an excellent overview of all the local products of the town reputed for its craftsmen's skills.

This lively museum also hosts some of the concerts of the Festival of World Sacred Music which takes place every June. The Moqui Palace, hidden nearby behind high white walls, houses treasures of rare architectural refinement. Prolong the dream by spoiling yourself with a night in the Jamaï Palace, previously the residence of a rich vizier now converted into a hotel.

Tissa, a town located 30-miles away from Fez, a one-hour day trip, where the Tissa Horse Festival is held in October to transform the city into party central. Visitors can always enjoy festive music, dancing, traditional food, and fancy tents. However, the main event involves riders in colorful garb demonstrating their equestrian skills and the quality of their purebred Arab and barb stallions. 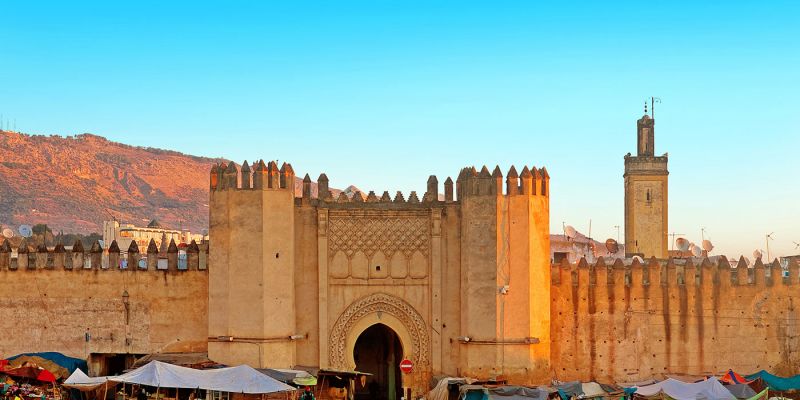 Zaouia Moulay Idriss II is considered one of the medina’s most holy shrines. It was dedicated to the founder of the city of Fez and the ruler of Morocco from 807 to 828. H shrine was completed in 1824, it was designed in a style that was widespread during Moulay Idriss’s period. For Muslim visitors, they consider visiting the shrine as good luck, and many women believe that visiting that place will help them with their fertility. For everyone else, it’s possible to glimpse part of the beautiful interior and tomb from the entrance and witness the burning of incense and candles.

Kairouan Mosque is the second largest Mosque and one of the oldest in all Morocco. The mosque was built in the ninth century by Fatima al-Fihri, the daughter of a wealthy Tunisian. The mosque is not accessible to non-Muslims, but it’s possible to peek in at the amazing interior that includes two chandeliers that were originally church bells from Andalusia. The mosque’s Islamic college is often referred to as one of the oldest continually functioning universities in the world.

Indulge yourself in the handcraft, meditation, and cooking workshops with one of our Fez Day Tours and Excursions, or Tour the real Morocco with one of our Morocco Vacations