The major landmark of Morocco Built in the sixteenth century, El Badi Palace was once a standing wonder. However, the palace has left us terraces to follow and explore how magnificent it is. It was built by the sultan Ahmed al-Mansour to commemorate the victory of the Battle of the Three Kings against the Portuguese.

A Glance on History of El Badi

El Badi Palace was constructed in the 16th century following the same Muslim-Morrocan style of architecture. The construction began in 1578, the same year the sultan Al Mansour, the Golden King, ascended to the throne.

He was the longest ruler and the most well known among all of his line and all the Saadian dynasty rulers.  It was built for the Saadian Sultan Ahmed al-Mansour Dahabi in the celebration of his victory over the Portuguese force.

During Al Mansour reign, El Badi Palace was magnificent in the western Muslim world. However, now only the palace’s courtyard, which has four sunken gardens and reflecting pools, reflects its majesty.

Unlucky few remains of the palace are standing up till the moment, you can visit the esplanade carved gardens, stories were told about the richness of those gardens with trees and spices in addition to the enclosure wall that once stood encircling the garden.

In 1696, Sultan Moulay Ismail acquired the luxurious pieces of the palace to be added to the imperial city, Meknes.

The palace is said to have more than 350 rooms, a pool, fountains, a wide courtyard, gardens, and more luxurious architectural elements that gave it the glam it deserves.

Let’s dive deeper into the structure of the Badi Palace...

Originally, the entrance of the palace was in the southeast part of the whole complex. Today, the entrance is from the north, through the Green Pavilion. Then it emerges into the central court of the complex which is 130m long and almost as wide.

In the northeast part, tourists can climb up to get a sight from the ramparts, and even a closer view of the storks that nest atop them.

The central court consists of four sunken gardens, divided as two on the northern side and two on the southern side.

Pools play as a separation of the two gardens on each side. There are further four smaller pools in each corner of the court, constructed on a substructure of vaults to allow the circulation of water through the pools and gardens.

When the pools are filled with water, the sight becomes incredibly majestic. 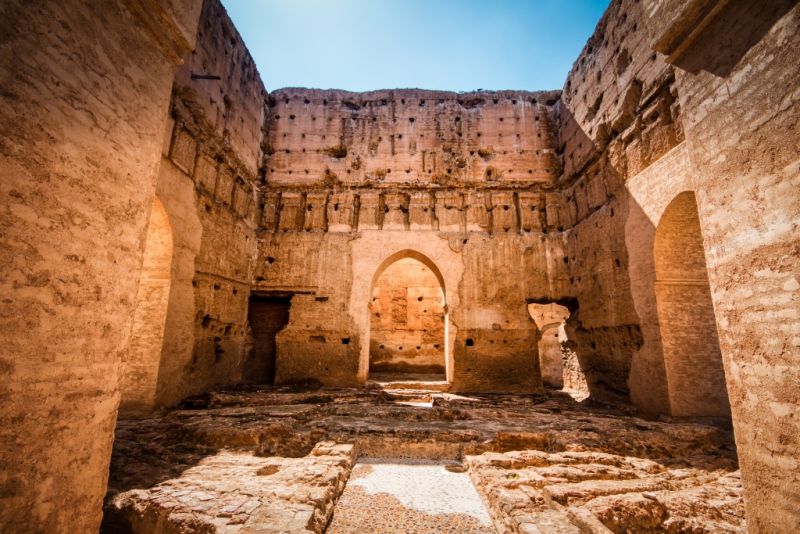 Summer pavilions are situated on each side of the courtyard. The foundations were the only to survive the Crystal Pavilion to the east.

On the opposite side, there is a monumental hall, which was named the Koubba el Hamsiniya (means The Fifty Pavilion), after its size in cubits. It was used by the sultan on occasions.

Accessed only to the right of the building housing the minbar, lie ruins of the palace stables, south to the courtyard. A series of dungeons were once used as a state prison into the last century, leading towards the wall of the present royal palace.

West of the pavilion, there is the room that houses the Koutoubia minbar (prayer pulpit). Made of cedarwood, the  Koutoubia minbar was once the minbar of the Koutoubia Mosque. The minbar is encrusted with marquetry and small writing in gold and silver calligraphy, made by artisans during the twelfth century.

Members of the public are not normally allowed to walk all the way around the minbar to explore the surviving work. However, the guardian may let you if you show huge interest. Photography is not usually allowed there.

Decorations and adornments included colored marble, onyx, ivory, cedarwood for which craftsmen and artisans were brought from all over the world to execute such a masterpiece. The palace was once standing to the north-eastern side of Kasbah and near the Cemetery of the Saadian family. In some periodicals, El Badi palace would be described as the eighth wonder of the old world.

The ruin's subterranean chambers include two exhibitions. One of them displays the photographic history of the Kasbah and Mellah area from the 1920s to the 1950s while the other one is an underwhelming exhibition about the conditions for slaves and prisoners that once resided in these underground caverns.

On the other side of the courtyard, opposite the entrance, the Khayzuran Pavilion is home to temporary contemporary art exhibitions.