A magnificent historical site located on the eastern Taurus mountain range and the 8th Wonder of the World bearing the most valuable monuments of the Kingdom of Commagene.

Taste of Cairo and Istanbul

Best Tour of Turkey and Greece

The summit of Mount Nemrut homes to one of Turkey's most iconic sights. Located on the eastern Taurus mountain range, the magnificent historical site is the 8th Wonder of the World, bearing the most valuable monuments of the Kingdom of Commagene. The fascinating and eerie funerary mound of King Antiochus I of the Kingdom of Commagene sits atop Mount Nemrut. UNESCO has inscribed Mount Nemrut on the UNESCO World Heritage List in 1987; it also named the site the 8th Wonder of the World.

Mount Nemrut, 2206 meters in height, is one of the highest peaks in the east of the Taurus Mountains and is situated on the Arsameia antique road. Nemrut looms over the whole territory encompassing the Firat river crossing and plains. 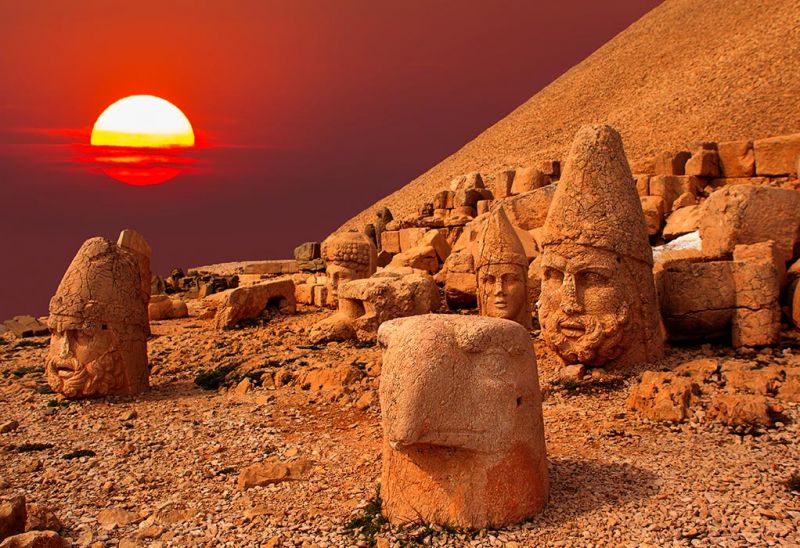 DuBack in time when the Roman and Parthian (Persian) Empires were competing, this region found itself right on the border between the two giant rivals. Formerly, it was part of the Roman Empire, Commagene and its governor. Mithridates I declared its independence. When Mithridates I died in 64 BC, his son Antiochus I claimed the crown and took this tiny kingdom's independence further. He signed treaties with both Rome and the Parthians. It was actions such as these that led Antiochus to believe Commagene was more important than they actually were which eventually led to his downfall, when he was deposed by the Romans in 38 BC. Antiochus' tomb is said to be concealed there although his tomb has never been found despite the extensive archaeological work at the site. 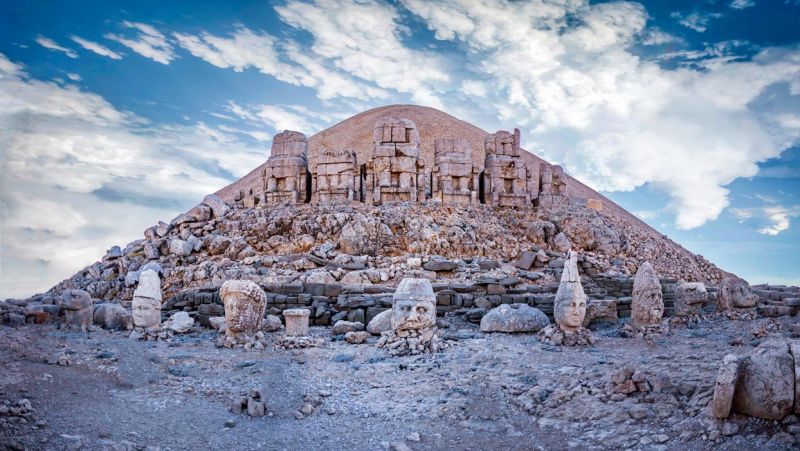 The site is full of statues of Greek and Persian gods made in 62 BC upon the order of the Commagene King Antiochus and the king’s own tomb and temple are still preserved. The tumulus and sanctuary include also some stone carvings of gods with the eagle head being one of the most well-known and intriguing carvings.

The site is divided into four sections and is home to many statues and monuments. The most complete statuary is on the East Terrace. Although the statues have all lost their giant heads, they now sit incongruously on the ground beside the bodies and the colossal figures of the gods face the main altar.

In addition to eagle, there is also a lion representation; and besides these two, the Greco-Persian deities there are Zeus Oromasdes, Heracles-Verethragna-Artagnes-Ares, Apollo-Mithras-Helios-Hermes, and Commagene-Tyche. Antiochus I himself is represented there as well.

On the West Terrace, most of the statues are less well preserved. However, the heads haven’t suffered the same fate and are lifelike and conserved. 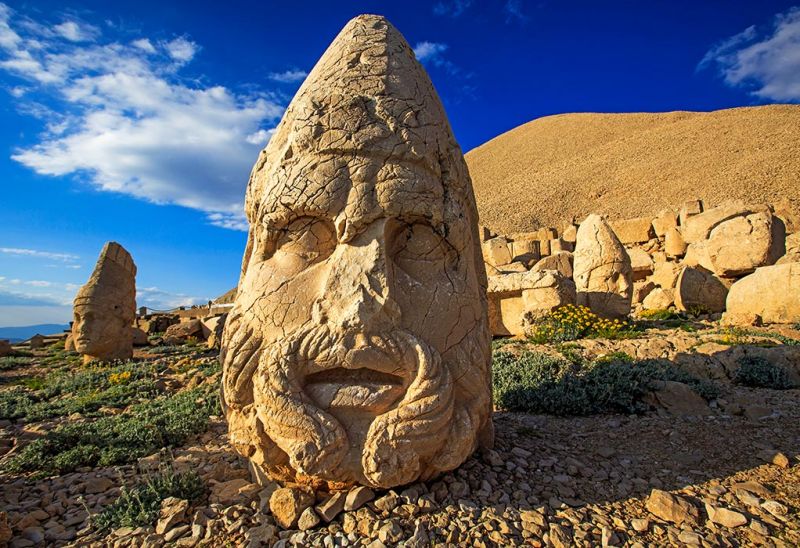 How to get there?

Due to its convenient location, Mount Nemrut can be reached easily via a variety of transportation options. After arriving at the Adıyaman Airport, travelers can either get a ride of one of the shuttle buses to Nemrut or rent a car and drive through Karadut village to reach to get there.

Tip: Explore a rich cultural heritage and an excellent landscape, create unforgettable memories are at Mount Nemrut through one of our Turkey and Greece Tours.