Every region has its own dances composed of unique moves and melodies. They are an essential part of all celebrations. Traditional folkloric dances are colorful visual performances and are highly enjoyable.

Turkey is known for its sophisticated culture that reflects in various dances. These folk dances are standard at wedding ceremonies, national and regional festivals, meetings like the ferfene, yaren talks and many more. Frequently, the dances are in open areas, but they can be shown in closed areas as well. Here, people enjoy themselves, exploring the wide variety of dance moves from different regions.

The standard form of dances you can come across is the line dance. Generally, there are numerous flock dances which are performed inconsistently to reflect the rich culture from every region. These dances include the Halay from the East and Southeast, Konya and Leziginka where the Horon dominates the area; the Hore is from Thrace, Zeybek from Aegean and Bar from Erzurum. Their costume and way of presentation are imposing for any curious mind.

Discover now the best Turkey Tours and Book your favourite one now!

History of the Folk Dance in Turkey

Without a glimpse of the Ottoman Palace, the history of the Turkish dance is never complete. At the beginning (the sixteenth century), the dances started as saloon dances which were seen in ceremonies and celebrations for the rulers of Europe. The Hippodrome was a typical stage to most spectacular performances in the Ottoman times. Here, villagers from around the palace came to perform their dances.

Given the different cultures from the various districts, the dances grow separately with each region presenting different dancing skills.
Despite Westernization becoming a massive part of the significant changes in Turkey, they still preserve their culture by ensuring their dance is a part of their lifestyle. Moreover, in turkey, dance is analyzed as a cultural element, where people go to dancing schools to learn these dances.

Here are dominant Turkish dances you can come across from the rich culture in Turkey.

From Eastern Turkey, the Bar is a structured formation dance that is performed by groups in open areas. It is presentable by both the male and the female gender.
In this dance, people move side by side while Turkish music fills the air with utmost skill from the talented instrumentalist. People often wear costumes when performing this dance, to bring out the native Turkish style.

As an Aegean dance, the dance is filled with colorfully dressed dances called EFe. Men mainly dance a symbol of courage and heroism. It is a traditional dance in Western Anatolia, with the music played varying in tempo, from slow, fast and eventually high-speed. Generally, the measures of the dance are from 9/2 to 9/8.

The Horon is a uniquely crafted flock dance, which is entirely different from other dances from some parts of Turkey. Horon which comes from the Greek word Choros, meaning dance, is a dance in the Black sea region in present Turkey. The dance is characterized by short strips, with a unique tempo, rhythm and measure from all the Turkish dances. It is performed in groups measuring 7/16 since their melodies are perceived to be very fast. Moreover, it's challenging to use any instrument to pull through this dance. The dancers are in black with silver trimmings, with their arms linked, quivering to the vibrations of the kemence.

You will find the Hora dance in most wedding ceremonies. The dance is structured with fast performance and a dominant measure of 9/8. The dancers bring out a frenzied environment that suits a wedding ceremony at the same time promoting their culture.

Performed in Eastern, southeastern and Central Anatolia, this is an exotic Turkish dance with vibrant figure and structure. The dance is presented with a drum-zurm and a kaval to maintain the constant rhythm for the dancers to excite the crowd.
This is the leading Turkish dances that are common in Turkey. Nevertheless, there are numerous dances in Turkish that you can explore. 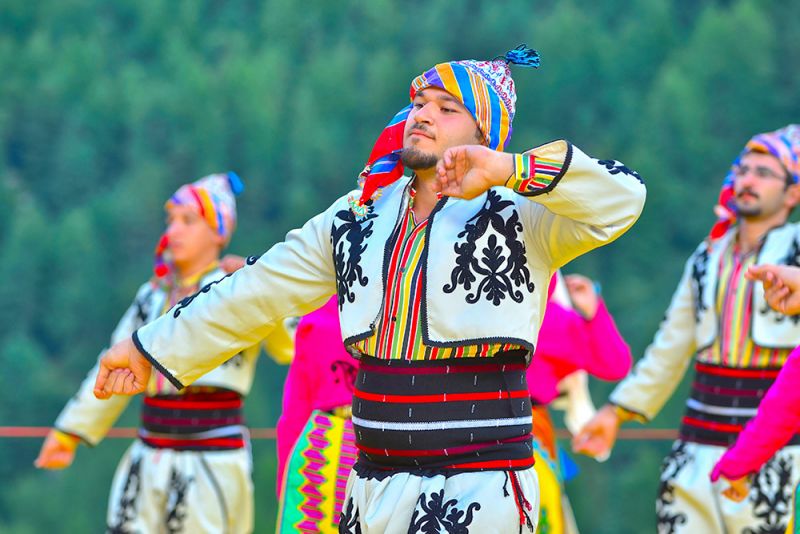 Other Dance in Turkey

This is a dance performed from Silifke to Konya. It is performed by both male and female dancers, where dancers use a wooden spoon to make a danceable rhythm, at the same time dancing to the music.

This is a traditional Turkish dance among the youth.

Astonishingly, this is a dance that is performed with no rhythmic instrument, and its melodies measure up to 9/8. The dance usually takes a worldly turn with references to suppression and sublimation of desire.

Shiksaray is a Turkish dance, which is believed to have originated from the Black sea region.

Van and Adiyaman are the most frequently dance styles that have grown popular in Turkey. They are performed with various groups in different ceremonies to ignite the dull spirit of the crowd.

Various dance groups are known to perform outstanding dances, with exciting performances, among them is the Caucasian dance group. The caucasian dance group is a specular dance group in Turkish dance performance or Dance of Turkey, serving as a must-watch experience for most visitors. Explore the Turkish culture with their amusing dances to leave your spirits lifted. You can never get enough in this beautiful culture.

Traditional and Modern Music of Turkey

Opera and Ballet of Turkey

Religious Holidays and Celebrations of Turkey