The Great bazaar attracts many people – far too many if you come at rush hour. It’s a good idea to arrive early in the morning and enjoy a cup of tea in one of the cafés whilst the bazaar comes to life. There are thousands of stalls, selling virtually everything, carpets, gold, cloth, spices. The bazaar is a world of its own and it’s easy, but fun, to get lost in the teeming alleyways.

Visiting Istanbul in Turkey Travel Packages couldn’t be in its perfectly done without surfing the Grand Bazaar, the Covered Market, the Grand Market, or Kapalıçarşı in Turkish. Pay yourself a visit to one of the most spectacular landmarks in Istanbul and even the whole world as it’s the longest and oldest known covered market in the whole globe. The market covers 61 streets along with more than 4000 shops. The Grand Bazaar got the world’s most visited touristic attraction in 2014 with more than 91.000 daily visitors.  The Grand Bazaar can be easily reached from the Sultanahmet area and both are combined in Istanbul visit within The best Turkey Tours. It locates inside the walled city of Istanbul at Al-Fatih District.

Projecting the major city Bazaar directly after the Ottoman arrival and the core of the market was started in 1455. Constructing such a project is part of the strategic planning for the economic independence of the Empire in Istanbul.  The widespread of the Ottoman Empire in 3 continents (Europe, Asia, and Africa) and the empire control over the communication road between Asia and Europe. European Travelers and traders of that time reported that the market has a square plan with two perpendicular roads crossing in the middle and a third road running along the outer perimeter. It's said that the Grand Bazaar had 67 roads, each of them is considered a mini-market dedicated to a certain type of goods. The prayers areas could not be ignored inside the Turkish architecture, subsequently 5 mosques were erected, and obviously the magnificent gates were built to be daily opened in the morning and closed in the evening.

Turkish Historian Evliya Çelebi, build us one of the clearest descriptions of the early forms of the Grand Bazaar. He reported that the bazaar embraced more than 3000 shops and the whole structure was not yet covered. It also documented that shops reached more than 3400 active shops, bedestens, chambers, bathrooms (Hamams), mosque and madrasa (school), fountains, and mausoleum.

By the 19th century, the diplomatic relations between the Ottoman Empire and the European Kingdom in importing and exporting then trades from the minorities like Jews and Armenians moved outside the grand bazaar to build their own shops and mini-markets in the districts like Galata and Pera markets what caused the Market decline.

The time calamities, Firs, and Earthquakes reached the bazaar structure, starting with the fire of 1515 than that of 1548 and so on caused huge damage that was quickly been restored and rebuilt. As a protection method, several parts were covered with vaults.
In 1898, the sever earthquake hit Istanbul damaged the Grand Bazaar, yet the Mister of Public works ordered the immediate restoration of the bazaar under his in-person supervision however the area got reduced as the western area was left un-covered opened to the sky, given the name “Tentmaker Road” and the gate got destroyed completely and erased.  Fires, earthquakes, and catastrophes came one behind the other and restorations as well, up till the mass-restoration campaign in 1980. 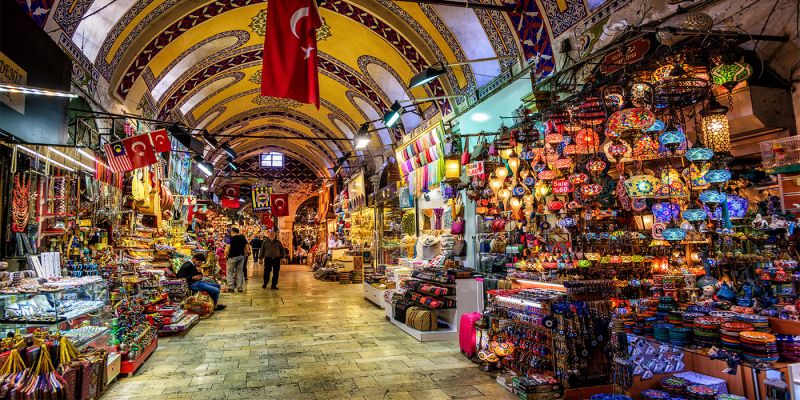 The Grand Bazaar got a rectangular plan with three rows of bays each of them topped with a small dome of brick. Window grills were placed directly beneath the roof to serve as sunlight illuminators and fresh air outlets.  The original structure of the bazaar was built out of wood but that was damaged with several fires along with the grand bazaar history. After the fire of 1700, the wooden structure was replaced with brick and stone infrastructure. According to theories about the Bazaar structure, it's said that the roof was once covered with tiles yet it got burnet. Eventually, the long sequence of calamities and restoration along the bazaar history gave us a recent form of intercourse lanes and paths like a maze with different angles, intros, and terminals.

The security of the trade center made it the preferred point for merchants and traders as gates are always closed at night following the Grand Bazaar opening hours, guards help in case of fire and uprisings.  The only recorded night opening happened in 1867 at the return of Sultan Abd Al-Aziz from Egypt, in the attendance of rejoicing crowds. 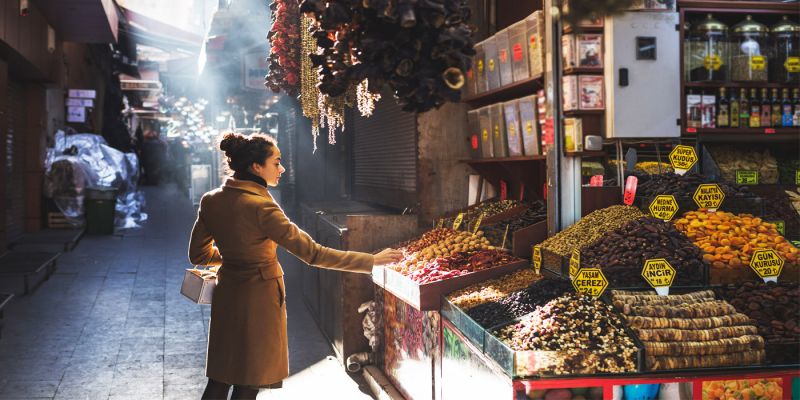 When visiting Istanbul Grand Bazaar, the Jewelry shops sine will take you to pass through the Beyazıt Gate moving forward to the Nuruosmaniye Gate, navigating the fabulous golden pieces of Jewellery and accessories crafted by Turkish artisans or being imported from top brands around the globe. One remarkable jewelry shops are Topkapı Özavar, which,.. will take your sight with its colorful jewelry. Surprisingly, certain pieces might have a historical and Nobel value such as the famous snake brooch from Madeleine Albright’s collection.

Carving an authentic scent of Turkey, then your destination must be the carpet shops, Zincirli Han. The easiest way to reach it is moving through the Nuruosmaniye Gate toward the Mercan Gate. A huge variety of textiles, fabrics, colors, patterns, and sizes hand-woven carpets and kilims as well awaiting you featuring a long history and civilization of Turkey and eastern/western world heritage.
Generations of families who worked in the same industry can be met there. You are buying history and heritage of ancestors and sons who worked in the Carpets and Kilims industry. Find a lot of stores offering Turkish authentic collections of hand-woven kilims and carpets you might be recommended to stop by and get off their high quality of Balkans, Anatolia, the Caucasus, Iran, and Central Asia production.

Souvenirs cant come from better locations than the Grand Bazaar. Vendors and merchants of Istanbul finest antiques, vintage jewelry, accessories of silverware, backgammon sets, watches to tableware, sea-foam pipes, and replicas of masterpieces. Materials difference to every taste and model from metal, gold, silver, bronze, diamonds, pearls, and Ivory, alabaster, glass and more. Şalabi Antiques, Minyatür’s Nautical Instruments, Eski Fine Arts and Antiques, and Sait Asil would be the best choice to get the all-in-one souvenirs shopping at the Grand Bazaar.
Customization and personal-ordering is one of the key features that attracts people to visit the Grand Bazaar, so if your stay is not so fast in the bazaar you can customize the hand made work of your pieces personalize to the design of your dreams.

Cafes and Resturants to rest, drink and eat are there with the Turkish traditional local dishes. If you are craving a Turkish homemade food, we recommend you Visit Aslan restaurant for a delicious selection.  Other options are here such as Havuzlu, where vegetarian meals are offered along with other options. Drinks are there for you, order your delicious hot & cold beverage from Şark Kahvesi, then get your on-the-go wraps and sandwiches from Aynen Dürüm.

Moving to the Eminonu quarter, near the Galata Bridge and next to the New Mosque (Yeni Cami) of Istanbul, Meet the Egyptian Bazaar or the Spices Bazaar, one of Istanbul's largest and most famous markets. A smaller market than the Grand Bazaar, the Spiece Bazaar. The Egyptian Bazaar construction is of two covered “streets” at a right-angle. It could be marked from the Grand Bazaar that it opens on Sundays. Hence the Turkish heritage is very descriptive when giving names and titles, it's clear that the Egyptian or Spices Bazaar is famous for Vividly colored spices herbs and spices once in history used to be obtained from Egypt, yet you can find all a huge variety from all over the world, nuts, dried fruits, baklava, cheeses, sausages, jams,  and, of course, Turkish delight lokum.

The Grand Bazaar welcoming its visitors daily all along the week from 9:00 AM to 07:00 PM, except for Sundays.