If you hadn’t yet heard about Myra, Its time to know more about its beauty! it's the traditional name of what's now Demre in Turkey, located between the towns of Kaş and Çıralı on the Mediterranean coast. In its glory days, Myra was a part of the Lycian League, together with the Unesco sites of Xanthos and Letoon, and Tlos, Pınara, and Patara. Myra is one of the best attractions in Turkey.

Though much of that glory seems to disappear over time, Myra remains a well-liked stop for day-trippers from Antalya, Kaş, or Kalkan. An ancient Lycian city, Myra is situated within the fertile lands of the town of Kale in Antalya.

Although a Lycian metropolis during the first days of Christianity, the remains from the traditional times are damaged aside from the nice theater. Myra houses impressive rock-cut tombs, proper to its name which implies “the Place of the nice Mother Goddess.” The Church of Father Christmas is another site of attraction. Myra and Limyra are known to own strong trade exchanges with maritime affairs.

Your complete guide to Myra

Visitors to Myra can step inside the remarkably preserved amphitheater and appreciate the 4th-century rock tombs carved into the cliffs, most of which are decorated with complex reliefs. Popular day-long tours combine three local attractions, the ruins at Myra, St. Nicholas Church in Demre, and Kokova Island, where the sunken remains of an ancient city will be viewed from a glass-bottomed boat. Most day tours to Myra started from Antalya.

Things you Need to Know Before You Go

There is a price of entry to go to the ruins. Stalls around the ruins sell food, water, and souvenirs. The Myra ruins lie along the Lycian Way, one in every of Turkey's most well-liked long-distance hiking trails, which runs between Fethiye and Antalya. Access to the ruins is restricted for wheelchair or stroller users or those with limited mobility.

How to Go to Myra ruins!

The Myra ruins are located just outside of Demre and 145 kilometers (90 miles) southwest of Antalya, about a 2.5-hour drive. Buses drive along the coast to Demre from Antalya and Fethiye, and therefore the closest international airport is in Antalya.

When to Get There

During the busy season (July and August), visit within the early morning or late afternoon to avoid the heaviest crowds and also the summer heat. there's little shade around the ruins. Overall the climate of Turkey is Amazing!

The history of St. Nicholas Church

Ancient Myra was also the house of Saint Nicholas, the priest who was the inspiration for the patron saint, and most visitors to the ruins stop by the St. Nicholas Church in nearby Demre to determine the sarcophagus of St. Nicholas and admire the church’s Byzantine frescoes.

Demre's Church of St Nicholas, where the eponymous saint was placed upon his death in AD 343, could be a star attraction for travelers and tourists. Although St Nicholas is not any longer in place (Italian merchants smashed open the sarcophagus in 1087 and supposedly carted his bones to Bari), the church features interesting Byzantine frescoes and varied floors.

The church was made a basilica when it absolutely was restored in 1043. Later returns in 1862 were sponsored by Tsar Czar Nicholas I of Russia (St Nicholas is that the defender of Russia) and adjusted the church by constructing a vaulted ceiling and a belfry. more modern work by Turkish archaeologists is getting to protect it from deterioration.

There are opportunities for fun all around Demre. From exciting excursions to well-known tourist attractions, this alluring small city packs a punch. Ready to start organizing your travel itinerary? 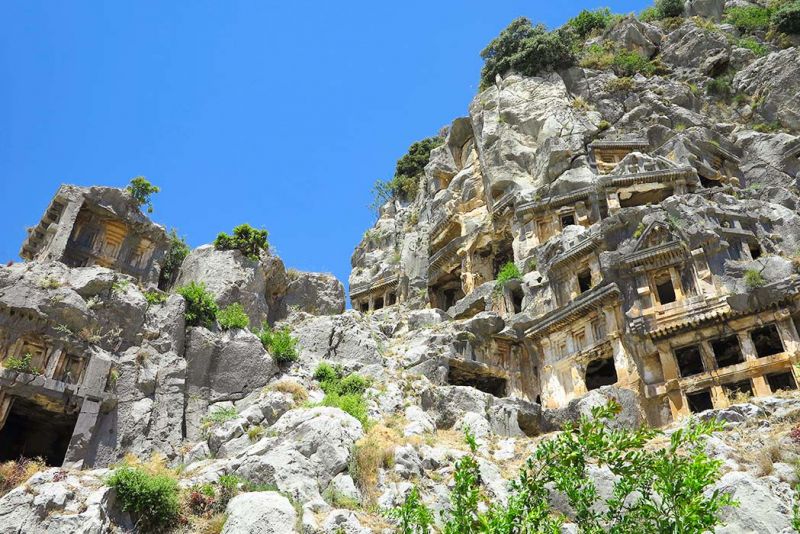