The Bodrum Museum of archeology was established within the Bodrum Castle in 1964. Originally, reconstruction of the castle was the priority; later, exhibition halls were created within the usable space. Today, there are 14 exhibition halls within the Museum of Bodrum. As is obvious from the name of the museum, it includes mostly underwater artifacts. The Glass Hall, with its ongoing exhibition of glass and glassware, was opened in 1986, with the help of Paşabahçe Glass and Bottle Factory.

General knowledge about the museum’s glass collection is provided here. The specimens are exhibited darkly, with illumination from below. This method of exhibition permits better viewing of all the varied markings and colors of the glass. Examples dated from the 14th century BC to the 11th century AD are on display. The hall also contains an aquarium, which has been set into an indention within the wall. The aquarium incorporates a small, but detailed model, which illustrates an underwater excavation.

The 14 impressive departments in the museum 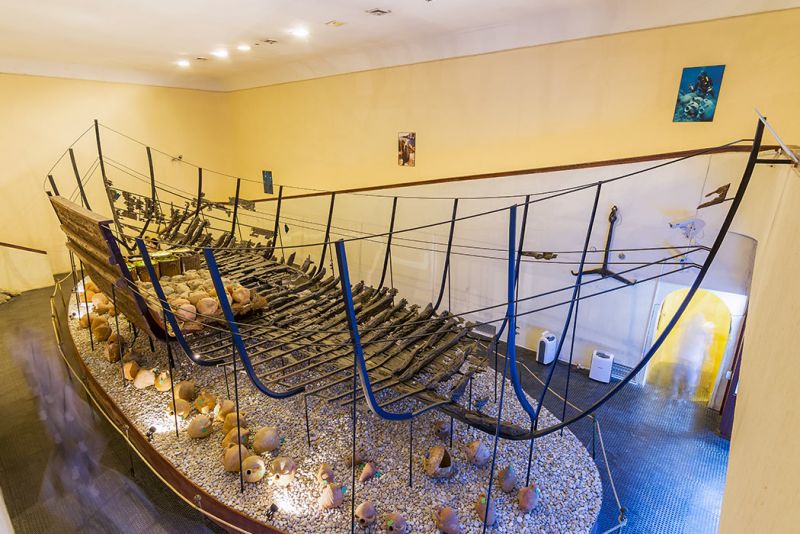 Sparkles from the Deep!

All of the specimens found within the excavations of Uluburun between 1984-1995 are going to be exhibited in Uluburun Shipwreck Hall, which is scheduled to open in 1999. Excavation and research of the oldest shipwreck within the world dating to the 14th century BC was conducted first under the direction of Prof. Dr. George Bass.

Cemal Pulak, under the auspices of the University of Texas A.M. and therefore the underwater archeology Institute. This shipwreck was found and dated in 1982 by a team under the direction of T.Oğuz Alpözen, the director of The Bodrum Museum of marine archaeology. The cargo of the ship consisted mostly of copper ingots. There also are quite 150 pure-thin, resin, cobalt blue, turquoise, and lavender-colored flat, round glass ingots.

These ingots constitute the oldest glass artifacts of the Bodrum Museum of archaeology. The shipwreck, dated to the late Roman period within the 4th – 5th century AD, was found in a very water depth of 36-42 meters near Yassıada.

It had been excavated between 1967-1969, under the direction of Prof. Dr. George F. Bass, under the auspices of The University of Pennsylvania. together with several amphorae, one complete glass jug was found within the excavation. This glass jug is exhibited within the Glass Hall.

It had been reconstructed to its actual-size in an old chapel which was used as an exhibition area before 1997. Both models and real-life specimens are exhibited within the reconstructed ship. The ship is believed to have sunk after running aground on a sandbar near Yassıada.

It absolutely was carrying provisions for the military of Emperor Heraclius during the war with the Persians. Just one 7th century AD glass bottle was recovered from the East Roman shipwreck; it's exhibited within the hall.

A shipwreck found at a depth of 32 meters in Serçe Limanı (Harbor), 24 miles west of Marmaris, was excavated and researched by Prof. Dr. George F. Bass between 1977-1979. Excavation revealed that the ship had two latten sails, 16 meters long and 5 meters wide, with a cargo capacity of 35 tons.

The broken glass and glass ingots which were stowed in sacks and baskets within the hold of the ship reveal this to be a trade-ship. Sumac and raisins were carried within the amphoras, together with fragments of broken glass. The ship was dated by measuring copper coins, golden Fatimid coins, and glass stones on which the name of the caliph of Fatimid was printed.

The Museum of archaeology is probably Bodrum’s finest attraction. With the added mystique of the Knights of St.

The combined efforts of the Turkish Ministry of Culture, local Bodrum sponge divers, and also the Institute of Nautical Archaeology have created and continually support the continued efforts to present and preserve the past treasures of the deep blue sea.

The hall named above was built by The Ministry of Culture primarily for the exhibition of the wooden remains of Serce Limanı destruction, its libation, and other artifacts.