Archaeological Museum in Antalya is one of the simplest venues of its kind in Turkey. The exhibits shown here come from the archaeological sites from Antalya Province and make an excellent addition after visiting these places. The foremost important sites represented during this museum are: Karain cave, ancient city of Perge and therefore the cities of Lykian civilization.

Both the wealth of museum collections and their presentation in spacious, modern interiors encourage visitors to spend many hours during this place. the distinctiveness of this institution has also been recognized internationally - in 1988 the Council of Europe awarded it with the Museum of the Year Award.

History of the museum

The first museum in Antalya was founded in 1919, just after the primary war. The teacher Süleyman Fikri Erten, who saved many archaeological pieces from looting, decided to make for them an appropriate venue. Initially, the collections were exhibited at the Yivli Minaret mosque, located within the historic Kaleiçi district. In 1972, a replacement building was constructed, on the western side of the town, and also the mosque was transformed into the Ethnographic Museum. 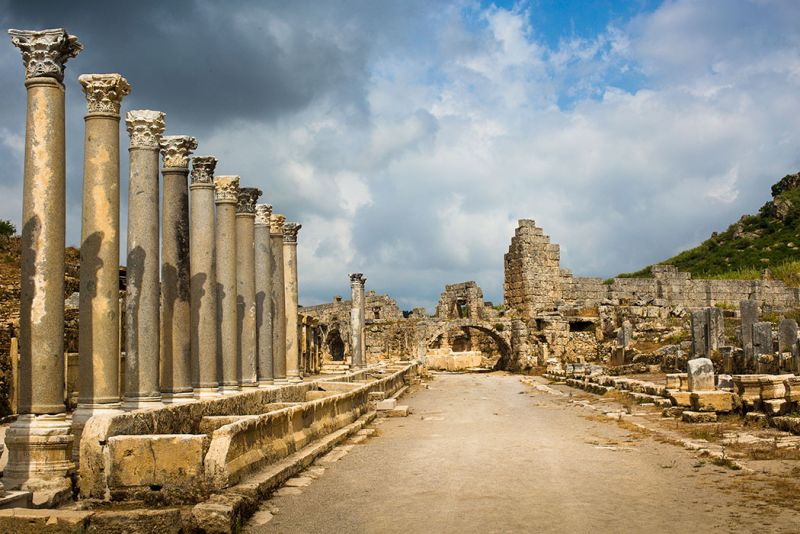 The building of the Archaeological Museum in Antalya boasts an exhibition space of 30,000 square meters. The exhibits are arranged in several spacious halls, and a few of them are placed within the museum garden. The objects that are within the possession of the museum illustrate many thousands of years of act within the region of Antalya. Due to the massive number of exhibits and also the vastness of its facilities a minimum of half the day is important to completely appreciate its wealth.

This little section of the museum offers the fossils and animal bones from different geological areas. The foremost interesting specimens are: the shells of big snails, the fossils of extinct cephalopods, foraminifera shells and anthozoans.

This hall display finds from the Paleolithic, Mesolithic, Chalcolithic, Neolithic, and Early Bronze Age. The illustrated items are mostly bone and rock tools. Illustrative panels explain the assembly process of those tools. There's also an exhibition demonstrating the method of leather tanning. The main focus of this exhibition is on the objects from Karain cave, but there are some finds from Öküzini and Sehahöyük.

One of the foremost beautiful exhibits may be a figure of a girl, found in Hacılar Höyük, Burdur Province. An extremely amazing feature of this exhibition is the reconstructed urn funeral from Karataş-Semayük site near the town of Elmalı. On this site an early Bronze Age cemetery was found where people were buried in clay vessels placed underground.

These capacious rooms are dedicated to the presentation of small finds dating back to the amount from 14th century BC to 15th century AD. The exhibits are ordered. Thematically and chronologically - there are special sections dedicated to (the 9th-7th centuries BC), Archaic, and Classical (the 7th-5th centuries BC) periods also as Roman and Byzantine eras (the 5th-15th centuries AD). The majority of time is taken by the ceramic finds, wonderfully presented, and well described.

The decorations explain the apparatus of such vessels as a crater, pyxis, kylix, and skyphos. The second region of this exhibition is dedicated to special archaeological sites from the Antalya region. they're illustrated by various finds - clay and glass vessels additionally as bronze objects and gold jewelry. Moreover, the profiles of the best-renown researchers that devoted their lives to the studies of this region are presented, including Thomas Marksteiner, Jürgen Borchhardt, Arif Müfid Mansel and Fahri Işık. They conducted their research in nearby archaeological sites of Myra, Limyra, Patara, Perge and Side.

The separate room of the museum is dedicated to the exhibition of marble heads of well-known and anonymous men and ladies from the traditional world. These heads were collected in numerous archaeological sites, including Perge, Patara, Letoon and are dated from the 2nd to the 4th century AD.

These two halls usually make the most effective impression on the visitors. they're exclusively dedicated to the presentation of the statues from Perge excavations. Most of those statues originate to the 2nd century AD. In the center of Emperors Hall there are the statues of Three Graces and a dancing woman. Along the walls of this room splendidly preserved statues of Roman emperors are displayed, along with their wives and other important figures.

Emperor Hadrian sternly observes the visitors and is well recognized by his trimmed beard. Septimius Severus was portrayed in an exceedingly playful mood, quite surprising for an emperor known for his serious attitude to life. The imposing statue of a lady is really dedicated to Plancia Magna who played a major role within the development of Perge within the golden age of the town.

The Hall of Gods, as its name implies, is devoted to the statues of ancient gods and goddesses. Naked Apollo stares dispassionately into the gap, Artemis - the goddess of hunting - has lost her bow, Athena's breasts are covered with a buckler from leather scales, with the top of Medusa in its center. Serapis doesn't look especially happy, but this impression may well be the results of the missing nose. He's in the midst of Isis, however the sole trace of her baby Horus are his legs.

A separate museum exhibition is dedicated to architectural elements and statues that adorned the rostrum in Perge. Many of those statues demonstrate admirable dynamics: Heracles is flexing his muscles, Emperor Trajan is standing nonchalantly, the god of wine - Dionysus - is holding his head, probably sore from an excessive amount of liquor, only Alexander the nice is standing proudly, just like the statues from the Archaic period.

The wealth represented by the sarcophagi during this room can cause you to feel dizzy. The primary group is named Pamphylian and are often recognized by distinctive garlands and therefore the figures of Nike and Eros. They were made in workshops in Perge, then exported to all or any corners of the empire, including Rome. The second group is named Sidemara or sarcophagi with columns.

It's most typical of the sarcophagi found in the peninsula, and people that are in museum collections come from the Pamphylia region. These sarcophagi are characterized by their decorations harking back to the temple with a colonnade. Between the columns, within the variety of reliefs, the scenes from the lifetime of the deceased are shown. The foremost interesting specimen of this type of sarcophagi displayed within the museum, shows the Labours of Hercules. Another wonderful example is that of the sarcophagus of Domitias Julianus and his wife, made within the 2nd century AD.

The most unique sarcophagus within the collection of the museum is that of the one with medallions. this can be just one of its kind preserved in its entirety, decorated with medallions supported by the carved figurines of the goddess Nike. Additionally, there are sarcophagi for kids and one, extremely rare, prepared especially for a dog. A separate part of the exhibition is dedicated to the funeral customs of the traditional period.

The collected icons are a valuable witness to the presence of the Greeks within the region of Antalya, which ended with the population exchange between Turkey and Greece within the 20s of the 20th century. These icons depict the scenes from the activity of Jesus, the Doomsday, the Ascension of Mary and also the lifetime of John the Baptist.

The coins displayed within the museum include the pieces from antiquity, the center Ages and therefore the era. A good example of this category is the treasure of Aspendos, which consists of 206 silver starters (Greek coins). These starters, found by archaeologists, were minted in Aspendos, and also the latest of them is dated to 350 BC. It's believed that the owner hid his treasure after hearing the news of Alexander the good approaching town in 332 BC.

The section dedicated to ethnographic topics represents a little part of museum collections and seems to have been prepared without the spirit. There are carpets, traditional costumes, weapons, tiles from the Seljuk and Ottoman periods, manuscripts, candlesticks, an oversized collection of wooden spoons, and even a wheeled vehicle. the foremost interesting elements of this exhibition are the recreated interior of a typical household of Antalya from the 19th century and therefore the nomadic tent.

In a hall specially prepared for the youngest visitors there are miniature models of the most important historical monuments in Turkey. Children can see the ruins of ancient cities of Perge, Aspendos and Patara, take a look into Karain Cave or a household from Çatalhöyük as well as the fortifications of Alacahöyük or admire the Lycian rock tombs of Myra.

In the garden of the museum there are mainly stone artifacts from the Roman period, which because of their large size couldn't be accommodated inside the building. 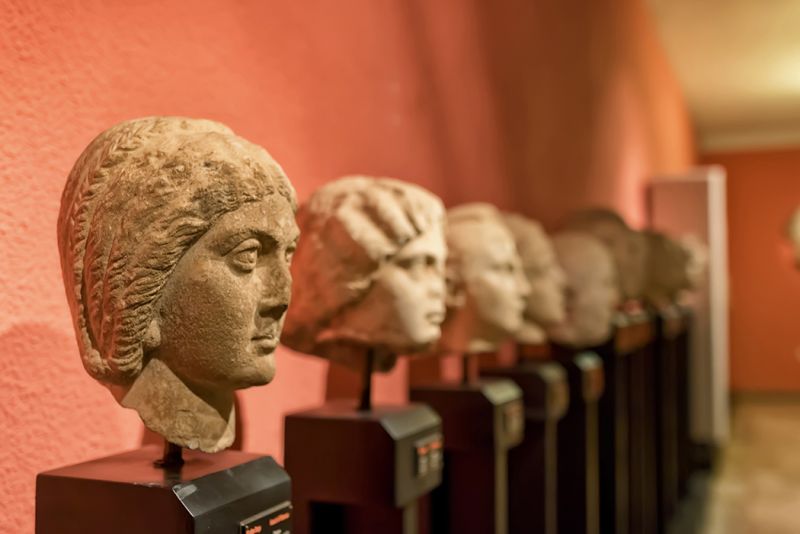 Arriving there? What to do?

The Archaeological Museum in Antalya is found within the south-western part of town at Konyaaltı Caddesi No:1. the space to the museum from the historical center of Antalya (i.e. Kaleiçi district) is 2.5 km (1.5 miles). Next to the museum, there's the final station of a so-called Nostalji Tramvay (Nostalgic Tramway) route that connects the western districts of Antalya with its historical center and also the eastern beach district of Lara. The trams run every half an hour, from 7:00 a.m.to 9:00 pm. The regular ticket costs 1.70 TL.

The Archaeological Museum in Antalya is open each day, within the summer season (from April to October) from 9:00 a.m. to 6:30 p.m. within the winter season (from November to March) the visiting hours are 8:00 a.m. to 5:00 p.m. The ticket costs 20 TL (in 2015). There is a chance of renting an audio-guide (10 TL) that provides a chance to pay attention to the detailed narratives concerning all museum exhibitions.

This technique is offered in English, Turkish, French, German, Italian, Russian, and Spanish. This solution is extremely advisable as a number of the exhibits have information panels in Turkish only.