The Old World Wonder in Turkey

Turkey's President Recep Tayyip Erdogan declared it a Mosque, not a Museum. The Mosque of Hagia Sophia is considered the 8th Wonder of the World and one of the most visited places in the world in terms of art and architecture history you would better include in your Turkey Travel Package.

The Great structure was built with its famous massive dome 537 CE. The Byzantine Cathedral of Constantinople, Istanbul, of the 6th century, is considered the world's largest building at the time. Historians consider it the high point and epitome of Byzantine architecture, However, part of the building was collapsed due to an earthquake, and fortunately got restored once again.

The Mosque of Hagia Sophia is one of the major components of the UNESCO World Heritage site called the Historic Areas of Istanbul by the side of various monuments and attractions you don't want to miss in Turkey Tours either in a day excursion on Istanbul City Tour or within your Turkey Vacation Packages. Hagia Sophia's architectural and historical value never stopped yet inspiring model in designing and building, the Famous Sultan Ahmet Mosque, the Suleymaniye Mosque, and the Rustem Pasha Mosque.

The Seat of the Ecumenical Patriarch of Constantinople Construction

Since Hagia Sophia/Ayasofya’s constructions in 537 until 1453 it became a mosque then converting into a museum in 1934. The Building served as an Eastern Orthodox cathedral and the seat of the Ecumenical Patriarch of Constantinople, except between 1204 and 1261, till the Fourth Crusaders converted it to a Roman Catholic cathedral under the Latin Empire. It stood as a Christian church for 916 years.

After the Ottomans put their hands on the city in 1453, Fatih (The Conqueror) Sultan Mehmet Re-identified and changed Hagia Sophia into a congregational mosque where Friday Prayers and speech should be held, that lasted for nearly 500 years. Yet, after the Ottomans got the authority the Turkish Republic changed the construction to become a museum by Mustafa Kemal Ataturk.

The church of Devine Wisdom, Church of the Holy Wisdom or the most known as Hagia Sophia, Ayasofya by Turkey locals and Sancta Sophia in Latin. The most famous and fascinating monuments. It was inaugurated Emperor by Emperor Justinian in 537.

The building plan was projected to produce a square outline to e completed after 6 years in 537 CE. The building took the traditional Coptic Architectural theme of Byzantine Basilicas, with a huge vaulted hall surmounted by a dome (180 feet high and 100 feet wide ) over pendentive transactional area than two semi-domes. The great hall is consisting of aisles separated by columns into galleries of marble supporting the domes and occupied with arched windows.

Fall Twice and stand Victoriously on the Third (Main Building)

Hagia Sophia Mosque’s current building on the site of Byzantium’s acropolis, where prior two constructions were once standing. The first time this building was erected got the traditional Latin Colonnade Basilica with its famous roof in 360 by Constantius II, yet the magnificent building was burned down in 404.

In 405, Theodosius II built the second building, unfortunately, it burned once again in 532. However, some of its marble columns remained and can be seen today in the garden of the current Hagia Sophia Mosque. A few days later the work on the third Building started in larger area and majestic execution.

The Rising Dome of Hagia Sophia

The outer and architectural feature that marking and topping Hagia Sophia is its magnificent dome that rises above the building. According to theory, up till the arrival of Michelangelo’s dome on top of the St. Peter’s Basilica, the dome of Hagia Sophia was the largest dome ever built. The current Dome is (31,24 meters) sits 55,6 meters above your head, covered with gold mosaic, decorated with Koranic inscriptions and standing over an arcade of 40 arched windows.
The original dome was damaged completely in 558 due to a severe earthquake. Regardless of the damage, the Emperor ordered a restoration operation to be executed immediately with finer materials and substances preventing its collapse again.

The Cathedral of Hagia Sophia was the seat of the Orthodox patriarch of Constantinople, the home of prayers, rituals, relics of saints, Fragments of the true cross, and the holy stone tomb of Jesus. Unfortunately, These all were lost in the Fourth Crusade.

Major Identity Transformation, A Church into A Mosque

By 1453, The Ottoman reached Constantinople. Sultan Mehmet II gave his word on converting the Church of Hagia Sophia into The Mosque of Hagia Sophia. The architectural elements of the Christian Building were covered with plaster and New Islam Architectural elements that were added to assure the new identity.
Wooden minarets were built by the architect Sinan. Colossal candles, Arabic calligraphic roundels, chandelier, Minbar (Pulpit), Mihrab (Prayer niche directed to Mecca), Hellenistic urns/vases, Library, and an ablution fountain were added. Later, Mohammed II’s son, Bayezid II built the narrow white minaret on the northeast side of the mosque. Looking forward to the western side of the mosque, two identical minarets were added by Selim II or Murad III.

By the side of the glory and greatness of Hagia Sophia construction, it is considered one of the finest witnesses attested to the History of Turkey multi-waves and identities. After the long rule of the Ottoman Empire, the modern history of Secular Turkey has started to be written by the rule of the Turkish Republic by the hands of Mustafa Kemal Atatürk, the founder and first president of the Republic of Turkey, in 1935. Yet Hagia Sophia walls bear the history between its bricks, beneath the covering plaster, that was discovered with the excavations of the 19th century.

Entering the Imperial Gate (the original west gate), the oldest and very first Byzantine mosaics showing Jesus Christ enthroned in the attendees of an emperor kneeling in respect. Mosaics of the floor survived with the representation of the Virgin Mary with her infant Jesus blessing the emperors Constantine and Justinian.

Once again the ground mosaics leading to the galley bearing a royal scene of Emperor Alexander with a skull, The holy family (Virgin Mary and Jesus the Christ) protecting Emperor John II Comnenus and Empress Irene, Jesus and Emperor Constantine IX Monomachus and Empress Zoe, a representation of Virgin Mary holding the infant Jesus, the archangels Gabriel and Michael, portraits of Saints and Apostles, and winged seraphim.

The Hagia Sophia locates in the heart of Istanbul, in the area of Sultanahmet next to Topkapi Palace, The Blue Mosque and Istanbul Archaeology Museum. Hagia Sophia Mosque welcomes its visitors on daily from 09:00 AM – 07:00 PM. Entering Fees for Hagia Sophia Mosque is 40TL=$7.5, yet better for you to double-check before the visit or let it for your Tour operator to handle it. 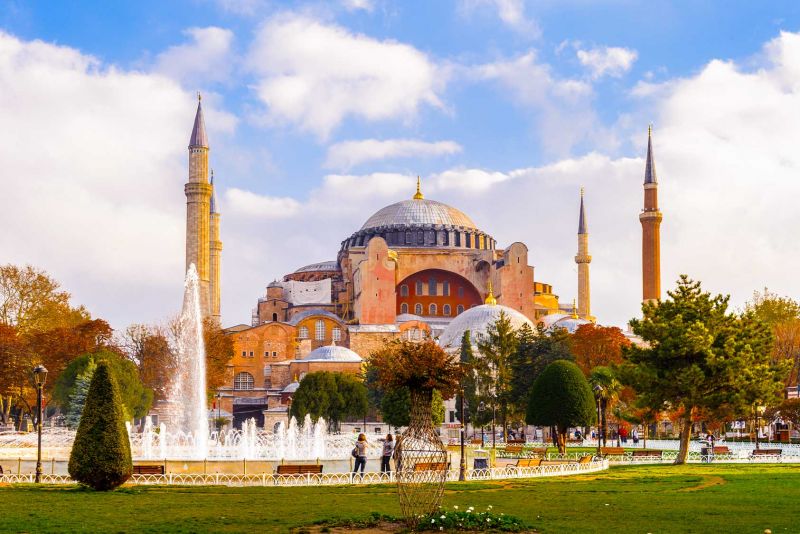