Know more about India customs and traditions and discover how Faith, family and castes shape every aspect of Indian culture from birth to death and all the trials and parties in between. Indian society is structured around the families people are born into and where they are born. However, India is a diverse country that combine many cultures.

Tour to India and Bhutan

Know more about India customs and traditions with our Trips To India discovering how Faith, family, and castes shape every aspect of Indian culture from birth to death and all the trials and parties in between. Indian society is structured around the families people are born into and where they are born. However, India is a diverse country that combines many cultures, read on the dig more into following topics,

- Indian society and way of living

- Languages with official status in India

Indian society and way of living

Faith, family, and castes shape just about every aspect of Indian culture from birth to death and all the trials and parties in between. Indian society is structured around the families people are born into and where they are born. Individuals inherit their social position and stay within it throughout life. A caste, or jati meaning "birth", is the level within the social system that determines who people will marry and often even what line of work they can pursue, where they can live and what they can eat.

There is more than 2,000 jati and they fall within four recognized caste groups, or varnas.: Brahmans (priests and the most educated), Kshatriyas (warriors and landowners), Vaishyas (merchants) and Sudras (craftsmen and workers). A fifth, unofficial group, the Panchamas were historically called the "Untouchables" and in more recent years the Dalit or "Oppressed." About 17 percent of India's population belongs to this lowest of groups and performs farm labor or other manual work thought to pollute or sully higher castes in the system. In addition to being identified and included as part of social caste, most Indians remain within family units that cross generations, from youngest to oldest, all living within the same housing quarters or complex.

Languages with official status in India

Men in a family line often stay with their birth families until their own fathers die and they start extended families of their own, while women will leave their homes once they marry and become part of another's an extended family unit. Most females in India leave their families at a young age and a family's caste and location have a lot to do with when a girl will be married. In 1929, Indian law forbade marriages for girls under 12 years of age, allowing those 12 and over to become brides, but in 1978 the age limit by law became 18. With parental consent, however, many families follow their religious laws and cultural traditions and arrange marriages for girls before and after puberty.

And while India embraces the practice of marrying for love and romance among two people, the most common practice is for the families to find mates for their children in an arranged marriage based on caste, religious beliefs, and astrology. Once a bride and groom are promised to one another, a series of engagement parties, beauty rituals, and family meals and parties begin, leading up to a marriage celebration that lasts from three days to a week. Some couples approach engagement and wedding never having met until they go home together after the ceremonies as husband and wife.

Along with rich décor and sumptuous feasts, Indian weddings usually feature a bride in red. Believed to symbolize prosperity, luck, and fertility, red bridal wear is a traditional favorite, much as white gowns dominate Western weddings. Modern Indian brides sometimes opt for dark hues other than red and choose purple, dark yellow, blue or pink. Marriages tend to last for life and the divorce rate in India is very low, estimated at under 10 percent, and some studies show that the rate is climbing. Men and women are strongly encouraged to stay together as part of their tradition and to work through any issues, even very serious ones, rather than separate or divorce. 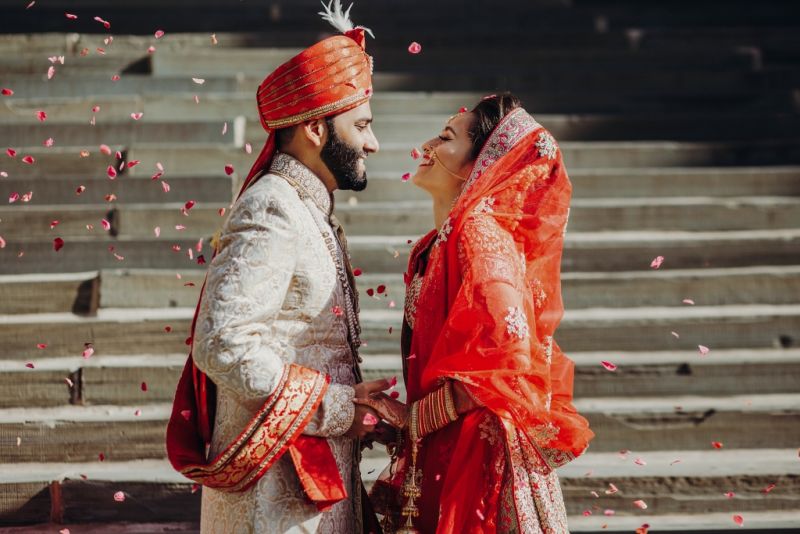 Religion in India is the foundation for most areas of life for individuals and families. More than 80 percent of Indians are Hindus and over 13 percent are Muslims. India is the birthplace of Buddhism, and at one time many Indians were Buddhists, but in modern times less than 1 percent of the population follows Buddha. Christians and Sikhs have about 2 percent of followers each.

Indian Hinduism, like some of its gods and goddesses, has many faces depending on caste and location. Shrines and places of pilgrimage in one region may differ entirely from those in other areas, and while many follow the Vedas as being sacred texts and dharma as moral code, not all do. Belief in a supreme god is common, though the gods and goddesses that come from him vary. Reincarnation, or coming back to life after death in a continuous circle of death and rebirth is common, as is a belief in karma, or the just desserts of sorts that determines what level and what form you will take when being reborn. Karma is based largely on what you did while alive, good and bad.

Indian Muslims, follow Islam and its singular god, Allah, and they refer to the Qur'an as their sacred text. Teachings from the prophet Muhammad are central to behavior and codes of living in a society in India as elsewhere. This means holding Muslim law above all others. Islam arrived in India through Persian, Turkish and Arab conquerors in about the 8th century.

Most of the subcontinent was converted to Muslim beliefs by the 13th century but European rule led to a waning of Islam. When India gained its independence from the British in 1947, the country was divided into Pakistan, with followers of Islam, and India and its adherents of Hinduism.

Indian etiquette is a combination of British and Asian cultures. Sometimes, it seems familiar to the western, however, some other times it does not. To clarify, Indian etiquette differs concerning the dining customs. It is proper for Indians to eat with their hands. They tend to eat with their right hand only as the left hand is considered unclean. Additionally, sharing food is a good Indian manner. Indians tend to order a number of dishes and share them all together. However, they do not share cutlery, nor they take food from each other’s plates. They show appreciation and praise the food instead of saying “thank you.”

As for social etiquette, when Indians are invited to someone’s house, it is considered bad manners if they arrive on a time, unlike in Western society. It is a good manner to arrive 15 to 30 minutes late. It is also normal for invited guests to bring friends with them. Moreover, it is better to organize a buffet rather than serving a meal. It is also a good idea to telephone the invited guests one day prior to the event, as it is considered polite. 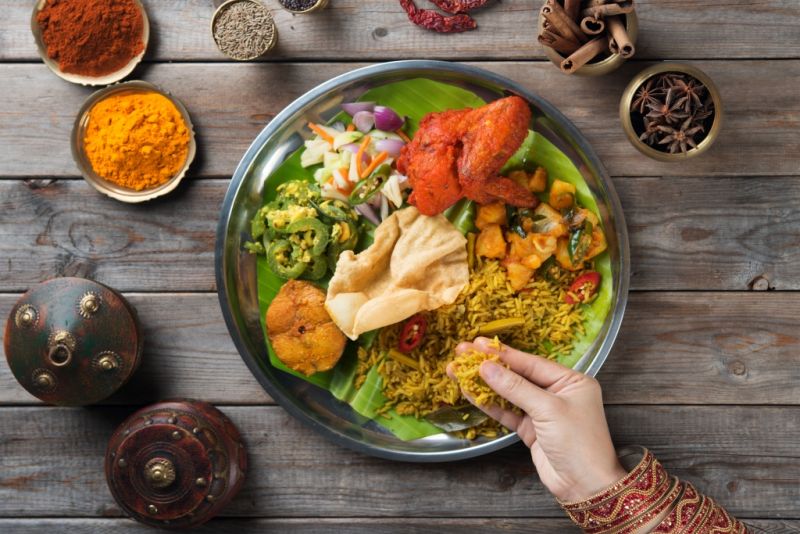 As for the Indian cloths, they are characterized by their colors. Women wear colorful silk saris, which are a traditional custom in India with very bright colors. Men also have a traditional custom that is called a dhoti; it is an unstitched piece of cloth that is tied around men's waist and legs. Men in India also dress in a kurta, which is a loose shirt about knee-length. Men wear a sherwani or achkan on special occasions, which is a long coat with a collar.

Namaste: It is a word used for greeting people in India. It is the most common greeting among other greetings. This greeting is marked by the gesture of placing both palms together and raising them below the face.

Tilak: It is a ritual mark made on the forehead between the eyebrows with kumkum or Chandan as a sign of blessing.

Aarti: It is a devotion, love or welcoming act. It is mainly performed when worshiping God. It is a circulated lam around a deity or person. It is usually accompanied by singing songs.

Bindi: It is a mark made with the vermilion powder that women wear on their forehead to show that they are married. It represents female energy.

Prostrating before parents and elders: It is an act of respect. Young people bow down and touch the feet of the elders, parents, and teachers. In turn, the elders give blessings by placing their hands on the head of the young people. 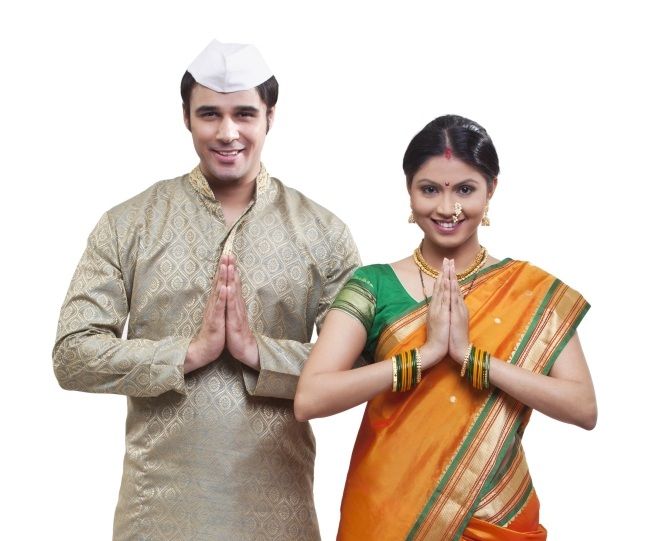