Kochi is a vibrant city that is situated on the southwest coast of Kerala state. Its proximity to the sea and the mountains provide an experience of moderate climate. Marking the city’s importance, it is called as the Queen of the Arabian Sea as well as the Gateway of Kerala.

Kochi, also known as Cochin, is a vibrant city that is situated on the southwest coast of Kerala state. The lovely city is bordered by the Western Ghats on the east and the Arabian Sea on the West. Its proximity to the sea and the mountains provide an experience of moderate climate. Marking the city’s importance, it is called as the Queen of the Arabian Sea as well as the Gateway of Kerala.

Kochi has a rich history, as the Arabs, British, Chinese, Dutch and Portuguese have participated in the history and development of it. Over the years, Cochin has emerged as the commercial and industrial capital of Kerala. It is mostly considered as the second most important city on the west coast of India, after Mumbai. Kochi also have an international airport that links it to many major cities worldwide. Although Kochi is a small town, it has outgrown its original bounds. It is now the general name given to much of the region connecting the original town, including Kochi, Fort Kochi, Mattanchery, Ernakulam and many other.

Kochi is the ideal starting point for discovering the diversity of Kerala state. It is rated among the top three tourist destinations by World Travel and Tourism Council. Additionally, it is featured in National Geographic Traveler’s “50 greatest places of a lifetime.” Kochi has been on every traveller’s wish list since forever. It combines both Colonialism and a local flavor, making it one of the most sought after destinations in India. Colonialism is reflected in Kochi, as both Fort Kochi and Mattancherry exhibit glimpses of the glorious past through its European churches, palaces, cemeteries, alleyways and fishing nets.

Moreover, Kochi has a lot more to offer its travellers, beyond colonial structures. For instance, the spice markets, the islands, backwaters and beaches have made their way to through the list of must-do things and experience in Kochi. The most innovative ways that Kochi has looked at tourism are art exhibitions and eco tours.

There are many tourist spots in Kochi, especially in the region of Kochi Fort. The Chinese fishing nets are one of the things that make Kochi a unique city. Since these nets are only found in Kochi, outside of India, it is believed that these nets were brought to Kochi by the Chinese ruler Kublai Khan. Many fishermen earn their livelihood by fishing using these nets, so the coast along Fort Kochi is dotted with a lot of these nets. Additionally, with the Chinese fishing nets and sailing ships in the background, Fort Kochi Beach is a memorable experience. There are a number of European style bungalows that can be seen along the shoreline. 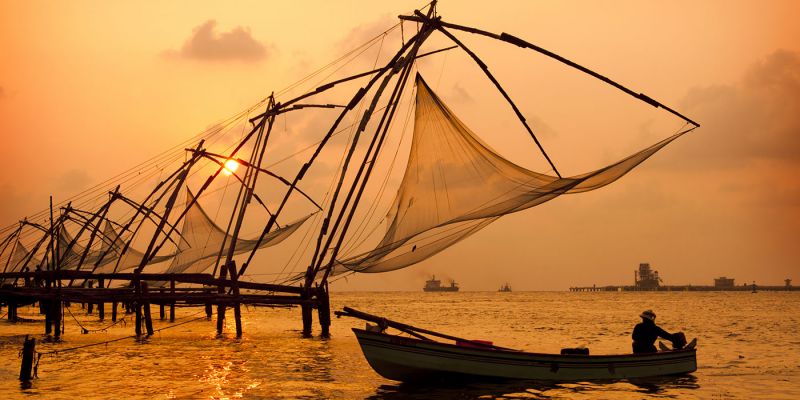 Furthermore, there is St. St. Francis Church which is the oldest church built by Europeans in India. Vasco da Gama, the Portuguese trader who reached India from Europe by sea, was buried in the St. Francis Church, as he fell ill and died in Kochi. Although, his remains were taken back to Portugal, his burial spot in the church has been clearly marked out. There is also Santa Cruz Basilica; the original church was built by the Portuguese in 1505 and named as a cathedral in 1558, but the British colonists destroyed it. Later, Pope John Paul II built current structure in 1905.

In Mattancherry, there is the Jewish Synagogue and Jew Town, where there are giant strolls of the Old Testament. The synagogue is decorated by Chinese tiles and Belgian chandeliers. Additionally, the Dutch Palace was built by the Portuguese. The Coronation of many Rajas of Kochi were held in the palace. The palace consists of a fine collection of mural paintings that are depicting scenes from the Hindu epics of Mahabharata and Ramayana.