Gandhi Smriti, in New Delhi, is where Mahatma Gandhi spent the last 144 days of his life before he was killed. The building has a number of articles associated with Gandhi’s life and death.

Tour to India and Bhutan

Gandhi Smriti is where Mahatma Gandhi spent the last 144 days of his life before he was killed. The house is located in New Delhi. Consisting of 12 bedrooms, the house was built by Ghanshyamdas Birla in 1928. The house, formerly known as Birla House or Birla Bhavan, was sold to the government. When it was opened to the public, it was renamed as Gandhi Smriti. The building has a number of articles associated with Gandhi’s life and death.

The entire world knows one of India’s most famous freedom fighters - Mohandas Karamchand Gandhi, or more popularly known as Mahatma Gandhi. Pivotal in helping India gain freedom from the clutches of the British rule, wherein the British colonized and ruled over the Indians for over 200 years, Mahatma Gandhi is respected by people to this date worldwide, and also referred to lovingly as ‘Bapu’ or the ‘Father of the Nation’ in India. The Gandhi Smriti Museum in the Indian capital city of New Delhi is dedicated to Mahatma Gandhi and is also the place where he spent the last 144 days of his life before which he was unfortunately assassinated in the grounds on the 30th of January 1948.

Gandhi Smriti consists of visual aspects to immortalize Mahatma Gandhi and his noble ideas; educative aspects to shed light on the life values, and service aspects to introduce activities in order to fill certain needs. The museum displays photographs, paintings, sculptures, frescos and inscriptions on rocks that pertain to the years, Mahatma Gandhi. The museum also exhibits a large statue of Mahatma Gandhi, with a girl and a boy holding a dove in their hands on either side. It symbolizes his universal concern for the deprived and the poor. The statue is the work of the sculptor Sri Ram Sutar. It welcomes visitors to the main entrance.

Originally known as the Birla House, the government acquired the property in 1971 and converted it into a memorial, as a tribute to the Father of the Nation. The memorial, named Gandhi Smriti, was opened up to the general public in 1973 on the 15th of August, which is celebrated as the Indian Independence Day. The memorial serves as a poignant reminder to the freedom fighter and is situated on ‘Tees January Marg’, which translates to ‘30th January Road’ - another reminder of the date that the cherished leader was assassinated on. In spite of its grievous history, and perhaps even because of, the memorial has aroused the curiosity of many-a fan of history, from across the world. Indian tourists, too, seek to pay their respects to one of the most influential leaders that the world has ever seen - one that was notably unique in his quest for peace and his ideology of ‘Ahimsa’ (non-violence).

The memorial is as unique as the subject himself, and is characterized by three aspects:
1.    Visual Aspect
2.    Educative Aspect
3.    Service Aspect

The visual aspects in the museum depict the life that Gandhi had and the ideals he stood by; The educative aspect is meant to focus on those aspects that earned him the title of ‘Mahatma’, which means ‘Higher Soul’ or ‘Higher Being’; and the service aspect introduces activities that are used to subserve certain needs.

The main entrance of the Gandhi Smriti memorial has a large statue of Mahatma Gandhi, flanked by children - a girl and a boy - on both sides, with each of the children holding a dove, symbolizing Gandhi’s life-long teachings of peace and non-violence. Sculpted by Sri Ram Sutar, the base of the sculpture bears the inscription, “My life is my message.”

Visitors can walk around the memorial and the grounds, and at the spot that Mahatma Gandhi was assassinated, stands another structure, namely the ‘Martyr’s Column’. A pavement encircling the column is meant for visitors to walk around or carry out what is known as a ‘parikrama’, wherein you walk in a clockwise circle around the object as a gesture of reverence. For Indians to pay homage to the Father of the Nation at this memorial is a common sight, and some tourists from other parts of the world, who also hold Gandhi’s teachings in high regard, can be seen offering their respect.

The building is a walled complex in New Delhi that consists of a whitewashed two-story house with four side wings, a large garden and various buildings around it. A big black-marble marker lies outside the wall by the roadside. On the marker, silver letters state the name of the site, in addition to the line “The martyrdom site of Mahatma Gandhi.” The first wing of the house to the left is the place that Gandhi lived. The two simple rooms have been preserved. One can see Gandhi’s bed, his office and in a glass case on the wall, there are some of his personal belongings, including his round spectacles and his walking stick.

In the garden, the spot where Gandhi was shot, is marked by a small shrine with a memorial stone in it. The path leading to the spot is marked with two rows of footstep-shaped stones set onto the pavement. On one side of the garden, there is a semi-open-air exhibition, set into a roof-covered colonnade. The exhibition consists of a single row of large panels with photos and reproductions of text documents, pertaining to the life and work of Gandhi, with short explanatory texts in both Hindi and English. There are several statues and large images of Gandhi around. There is another shrine room at the end of the garden that includes a lifelike sculpture of Gandhi sitting cross-legged on the floor. 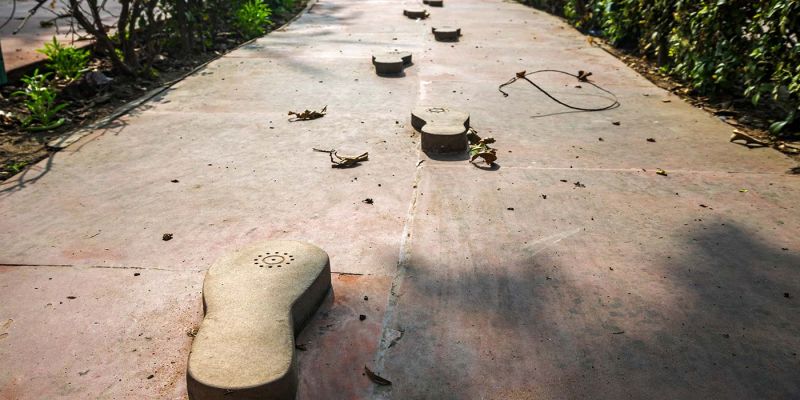 Outside the house, there is a pillar that contains a swastika symbol. It means that it has been used as a visual example to indicate that in the 20th century, the ethical meaning of the swastika symbol had changed in the west. As previously mentioned, there is a set of footprints that recreates Gandhi's final walk to the veranda where he was shot and killed and where Gandhi also led nightly prayers in front of a mass congregation. This space houses the Martyr’s Column that commemorates the exact site of his death. Visitors can tour the building and grounds, viewing the sparse room where Gandhi lived, where all of his belongings remain intact and the place on the grounds where he was shot.

There is a prayer ground, where you can find a Pavillion, with fresco art on the walls - and outside the pavilion, is a bench made of red sandstone, where it is said that Gandhi would either sit to pray or engage with various gatherings of people that would seek his counsel. The prayer grounds are mainly characterized by green lawns, with flowers and other decorations. With inscriptions that depict the beliefs and teachings and the life of Gandhiji, the lawns are a beautiful place with a lingering poignancy that adds to the charm.

Upon entering the Birla House, which is the house that Gandhi lived in for 144 days, there is a small room that he lived in. Today, the room is still home to some of the belongings that Gandhi owned, and the curators have managed to put together all of his possessions, including his walking stick, glasses, some cutlery, the stone that he used instead of soap, his wooden desk with the Bhagavad Gita on it, and a white mattress on the floor.

The house, now divided into multiple sections, is home to multiple exhibits, with black and white photographs of Gandhi, showing his evolution. There is also a room where films about Mahatma Gandhi are filmed.

Since the memorial is divided into multiple divisions, visitors today have access to tours of the memorial and the adjoining prayer grounds, where they can learn a lot more and see a variety of exhibits and artifacts, in addition to the ones mentioned above.

Getting to the Gandhi Memorial is not difficult, as it is situated in the Indian Capital of New Delhi, which is well-connected by air, rail, and road. Definitely, worth a visit for history-lovers and those that are interested in learning about the life and teachings of Mahatma Gandhi, the Gandhi Smriti is a beautiful monument to one of the world’s most influential leaders in all of history.