Hawa Mahal, “Palace of Winds” or “Palace of the Breeze,” is a palace built in Jaipur, located on the edge of the City Palace. The palace was built in red and pink colours sandstone, so it goes with the monuments of the “Pink City” Jaipur.

Jaipur, one of the most striking cities of India, has some of the most gorgeous palaces constructed during India’s rich history of emperors and kingdoms. Home to a diversity of royal structures, Jaipur is also home to the Hawa Mahal. Literally translated, Hawa Mahal is the ‘Palace of the Winds’. Jaipur is known as the ‘Pink City,’ and the Hawa Mahal does the name justice, with its pink and red exteriors.

Built in 1799 by Rajput king, Maharaja Sawai Pratap, the Hawa Mahal is a glorious structure, made of red and pink sandstone, and an indicator of impressive artistry during the age of Rajput rulers. As with most structures from the era, the Hawa Mahal is a fascinating blend of Rajput and Mughal styles of architecture. The palace was built at a time wherein the ‘purdah’ system was followed, which dictated that women were not supposed to be viewable to the public eye. Intended for the women of the royal household to be able to watch the bustling city life and the vibrancy of public festivals, while also enabling them to stay away from public view, the Hawa Mahal is yet another fine example of intricacy and Jaipur’s awe-striking architecture. The five-storeyed structure was built with the intention of resembling the crown of Krishna, a Hindu god, owing to the devotion and faith of Maharaja Sawai Pratap. 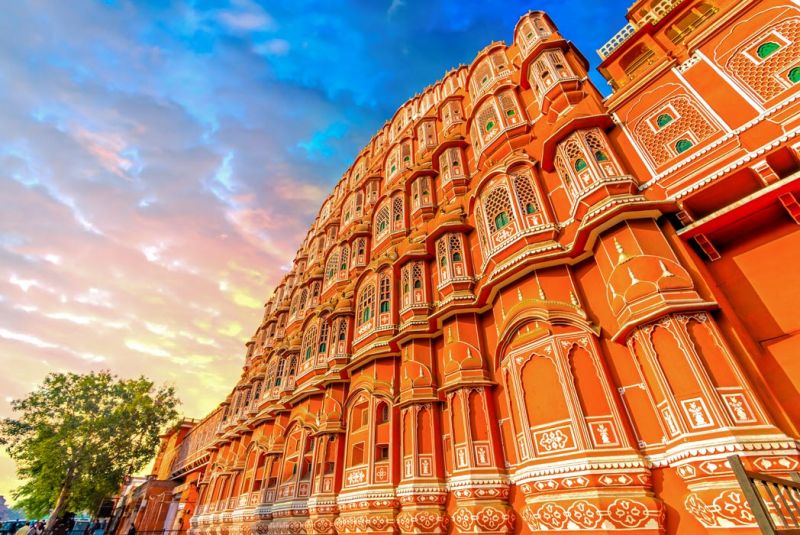 The palace itself has 953 windows, and a honeycomb-like façade, which boasts of cultural splendour and the prosperity of the Rajputs. Aptly named so, the Hawa Mahal truly is the palace of the winds, allowing it to stay breezy and pleasant due to the 953 windows of lattice-designs. The windows offer a stunning view of the city palace and the Sireh Deori Bazaar, which is said to be a shopper’s ‘paradise’.

Interestingly, the interiors are not as ornately decorated as the exterior of the palace, but the style still intrinsically reflects a rich culture of arts and crafts – with stained-glass art and tall, majestic archways.

The source that inspired the creation of this magnificent structure was another palace, the Khetri Mahal, located in Jhunjhunu, Rajasthan. While it is difficult to pinpoint many similarities between the two structures, it is said that Maharaj Sawai Pratap was so impressed by the Khetri Mahal (built by Bhopal Singh) that he decided to construct his own palace. The inspiration comes from the fact that the Khetri Mahal (also called the Wind Palace), had small archway openings for the wind to penetrate into the palace.  However, the Hawa Mahal reflects the king’s love for royalty in the lavishly created exteriors; while the Khetri Mahal is a plainer structure, albeit very impressive. 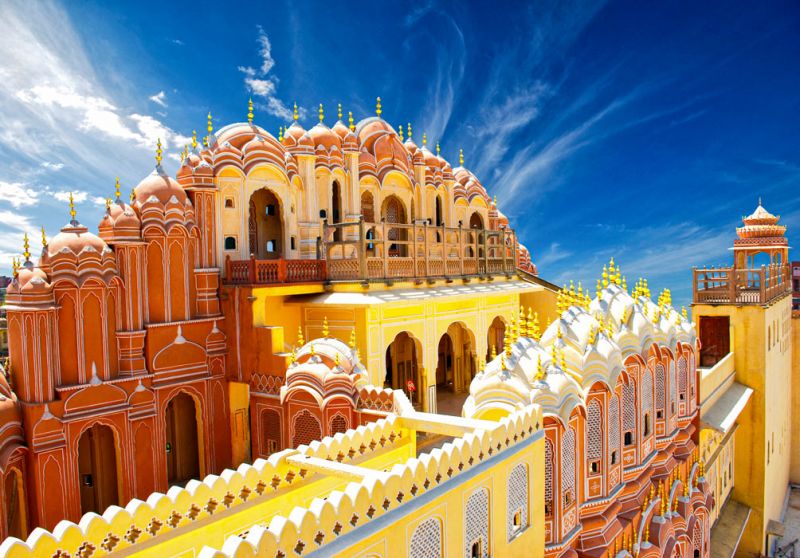 The Hawa Mahal was built as an extension to the Royal City Palace and leads to the women’s chambers. It is said that the king’s grandfather, Maharaja Jai Singh was extremely mesmerized and utterly amazed by the creation of the monument; He was so taken in by it that it became his favourite place to take resort in!

To witness this palatial wonder for yourself, you need to get to Jaipur; which is amongst India’s major cities and is easily accessible by road, rail, and air.

The best time of the year to visit the Hawa Mahal is from October to March, due to the cooler climate of the city of Jaipur during these months; the rest of the year is unnervingly hot because of the proximity of the city to the Great Indian Desert or the Thar Desert. The palace is open for the public to visit from 9 AM to 4:30 PM. It is said that the earlier you go, the likelier you are to be able to see the soft rays of the morning sun hitting the palace and illuminating its beauty.

Jaipur is a popular destination for tourists, because of which there are numerous hotels in and around the city centre, with different price ranges. From budget hotels to grand 5-stars, there is a large variety of hotels that you can choose from. We recommend staying in the city-centre, for you to be able to visit all the attractions that Jaipur has to offer, with ease.

A distinctive part of Jaipur’s wonderful history and culture, the Hawa Mahal is a must for tourists visiting the princely state of Rajasthan, especially for lovers of history and the ancient era of kingdoms!

Best Places To Visit In Jaipur