With steep forested hillsides falling away in all directions, Shamli town is strung out along a 12kmm ridge. Know more!

With steep forested hillsides falling away in all directions, Shamli town is strung out along a 12kmm ridge.The Himachal capital is one of India’s most famous hill resorts. For some visitors, the attraction is a series of relics from Shimla’s previous incarnation as the summer capital of British India.

The city of Shimla India is bounded by Mandi and Kullu in the north, Kinnaur in the east, the state of Uttaranchal in the South and Sirmaur in the west. The district’s elevation ranges from 300 to 6000 metres. The topology of the district is rugged and tough.

Generally, Shimla’s climate can be described as having cool winters and mild summers with the highest of the monsoon season in August. Having a cool climate, making it a popular spot for summer. The area is located at an altitude of 2200m above sea level, with hilly terrain covered by dense evergreen forests.

The best time to visit Shimla India  is after the end of the monsoon season in August until December. It is best to also visit the area during spring months from March to early May.

Things to Do in Shimla

The Ridge is an area in Shimla town between observatory and Jhakoo hills. The Ridge is where tourists come to see several colonial style buildings that include a church, library and statues of Mahatma Gandhi. It is also where Shimla’s festivals, fairs and functions are held.

Hike up Jhakoo Hill and enjoy a 30 minute of excitement witnessing a few mischievous monkeys. It will take you on a trail through lush forest terrain. The climb ends at 2455 metres, where the Jhakoo Temple dedicated to Lord Hanuman stands. Reaching the top, feast your eyes on splendid views of the Shivalik mountain range.

Catch a performance at Gaiety Theatre, first opened its doors in 1887. The theatre was a platform for dramatic arts. The Victorian facade has been restored and preserved over the years. Up until now, the Gaiety Heritage Cultural Complex continues to host events and shows.

Your trip will not be complete without a ride through the mountains from Kalka to Shimla on a toy train. The route is famous for the scenic vistas, accompanying you through the journey. 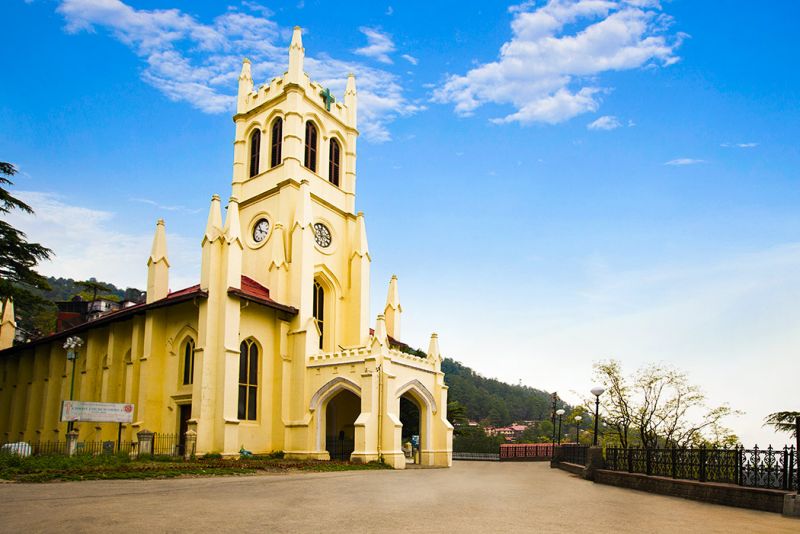 Being the second oldest Church in North India, the steeple of the church is visible from miles away due to its impressive neo-gothic style of architecture. Besides, the church includem lots of books and a huge variety of sculptures as well. The church is one of the only major landmarks in Shimla that has maintained its clean and well maintained condition. It is recommended to visit the church at night to witness the beauty of it when it is lit up.

Scandal Point was where the then Maharaja of Patiala and the daughter of the British Viceroy had eloped. The couple was banished from Shimla as a result of the scandal. Nearby Scandal Pointm, where the Mall road joins Ridge road, the General Post Office stands.

Viceregal Lodge was designed by British architect Henry Irwin. It served as the residence of India’s British Viceroy. Historically, the Shimla Agreement was sealed within the walls of the lodge. A guided tour of the stately interiors displays a collection of photographs, books and artefacts.

Rothney Castle was the home of Allan Octavian Hume, the British civil servant who founded the Congress in 1885. Although in need of restoration, the Castle, now privately held property on Jakko Hill, represents its glorious past in the intricate wood and glass work.

The Mall Road is the main street in Shimla and the centre of all activity. Colonial buildings have been overrun by boutiques and buildings over time. Cafes, restaurants and social hangouts on Mall Road are very popular with both locals and tourists.