Delhi is the city and national capital of India. Delhi consists of Old Delhi, the historical city located in the north; and New Delhi, the capital of India since 1947 located in the south. To the east, the territory shares boundaries with Uttar Pradesh; to the north, west and south it shares boundaries with the state of Haryana. Delhi is located astride the Yamuna river, primarily on the west bank. The territory of the national capital contains Old Delhi, New Delhi, the surrounding metropolitan region and rural areas.

Delhi is a succession of mighty empires and powerful kingdoms. Delhi has been a witness to the political turmoil for over five centuries, as it was ruled by the Mughals in succession to Khiljis and Tughlaqs. Numerous ruins scattered throughout the territory offer a constant reminder of the area’s history. Muhammad of Ghori captured the Rajput town in 1192, and the Sultanate of Delhi was established. In 1398, Delhi was invaded by Timur and that put and end to the sultanate. Babur then founded the Mughal Empire. At first, the Mughal emperors favoured Agra as their capital, but then Delhi became their permanent seat after Shah Jahan built the walls of Old Delhi. The city kept changing from one ruler to the other, from Hindi kings to Muslim Sultans. In 1803, the city came under the British rule. The British rule shifted their capital from Calcutta to Delhi; and it became the center of all governing activities. In 1947, after independence, New Delhi was declared as the capital of India.

Delhi’s cultural life is a rich one. It is a combination of the traditional and cosmopolitan styles. The city has numerous landmarks such as the Red Fort, a massive red sandstone fort and a proof of the glory of the flourishing Mughal Empire in Delhi; the Jama Masjid, India’s largest Masjid and Shah Jahan’s last architectural extravagance; Chandni Chowk,  one of Delhi’s oldest and most famous markets; and India Gate, one of the most popular monuments in the city. 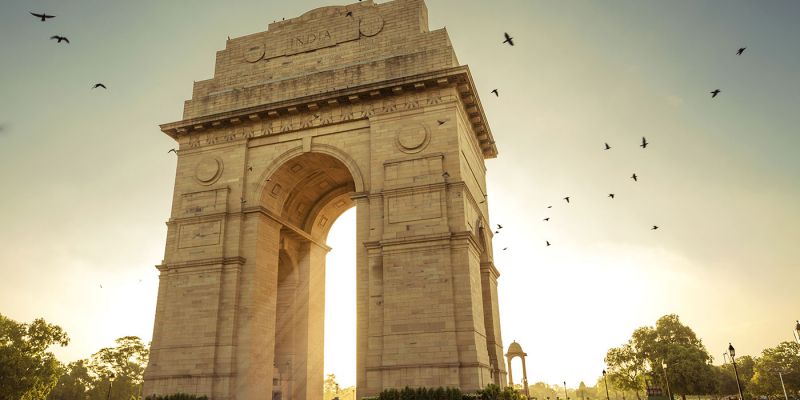 Delhi comprises of a number of important museums and cultural centers. There are the National Museum of India, the National Gallery of Modern Arts, the Indira Gandhi National center for the Arts. They are all dedicated to the preservation, documentation, and dissemination of the country’s artistic heritage.

The Crafts Museum exhibits Indian painting, carvings, metalwork, and other crafts. The crafts museum hosts events where local artists exhibits their works and sell their wares. Besides, there the Siri Fort Auditorium, which is a cultural events center; the Pragati Maidan, which is a trade and cultural center; and Dilli Haat, which is a popular bazaar that provides a range of handicrafts and cuisines from various states.

The climate in Delhi is dry in summer. Summer season in India lasts from mid-March to the end of June. The temperature varies between 37 °C and 25 °C. The climate is characterized by frequent thunderstorms especially in April and May. The monsoon season begins in July and lasts until September. During these months, Delhi have a lot of rainfall, three-fourths of the annual average. October and November are a transition period from monsoon to winter. The coldest month in India is January, with temperatures that vary from 21 °C and 7 °C.