Previously known as Mysuru, Mysore is the third largest and second most populated city of Karnataka. It is a mid sized South Indian city, spanning an area of 128 sq km (about 50 sq miles). The moniker of Cultural Capital of Karnataka has earned the rich cultural environment.

With about 2.5 million visitors annually, Mysore is one of the most visited cities in India. 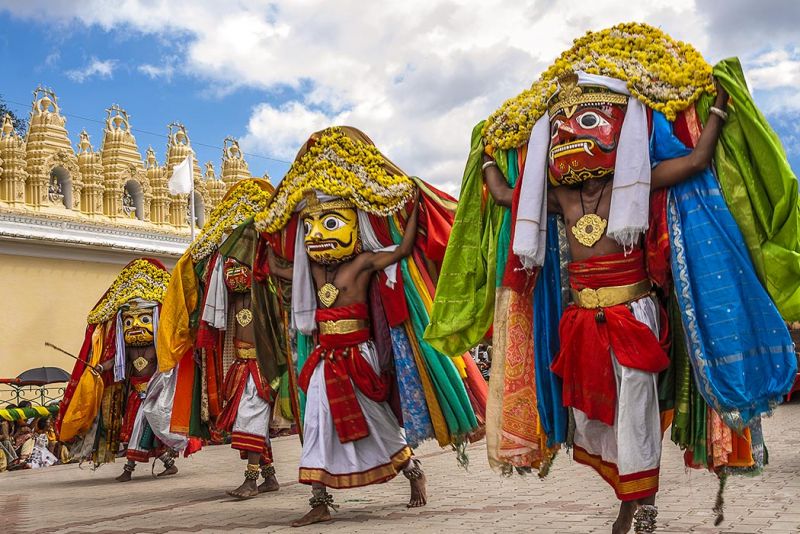 For ten days with people from all around the globe, Mysore Dasara festival is celebrated with great pomp and grandeur. It is celebrated during Navratri which goes on till the day of Vijayadashami. Often referred to as the Royal Festival due to its exuberant vibe, this festival is the most awaited event of the small city of Mysore.

Vairamudi Festival, Melkote Temple is another festival celebrated in the city. It takes place on 23rd March at the Cheluva Narayana Swamy Temple. It is celebrated when the deity is adorned with the legendary diamond-studded crown. Then, the lord is taken through the city in a colorful procession, attended by more than 500,000 people.

There are some remarkable structures in Mysore India like the famous Mysore Palace and the Jaganmohan Palace. Somanthapura, Karanji Lake & Park, Chamundi Hill, Brindavan Garden and Rail Museum are other important tourist spots in Mysore.

What is Mysore Famous For?

The city is also known for its quality silk. The royalty of Mysore is taking serious measures to cultivate the craft. The silk saree is a light, smooth and soft with beautiful intricate golden zari thread in different patterns. There are plenty of saree shops in Mysore to choose from.

Sandalwood has become a flourishing industry in Mysore. There is no better place to buy the famous Mysore Sandalwood soap and oils other than the city itself. There are shops located near the Devaraja Market, specializing in the same.

The city produces one of the best coffee across the country. Visitors can easily buy coffee powder or purchase roasted beans and have them fresh ground. Plenty of stores are located near the Devaraja Market.

Places to Visit in Mysore 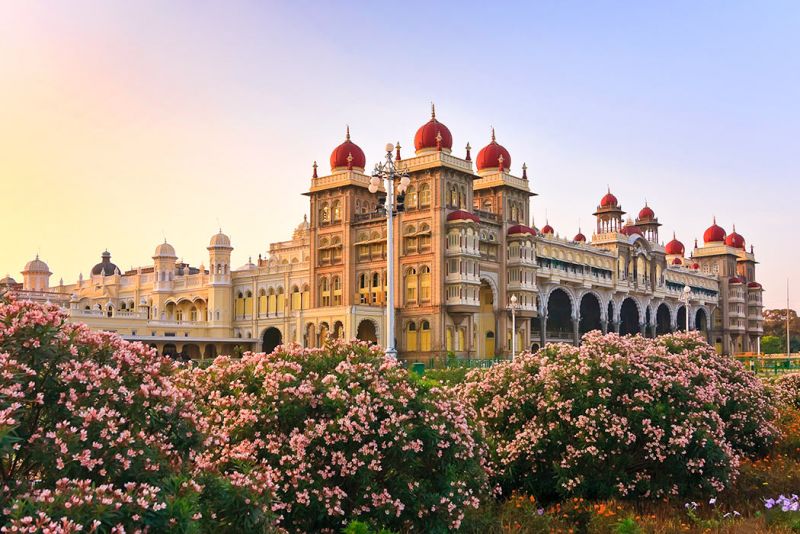 Located in the heart of the city, Mysore Palace is very well known for its rich culture and architectural history. It is a highlight of the architecture, representing Hindu, Rajput, Islamic and Gothic style of architecture. Mysore Palace features two Darbar halls, gardens, and buildings. It is the official residence of Mysore rulers.

The Rail Museum is the second museum in India after Delhi. The museum displays a huge collection of vintage locomotives and royal carriages, which were once utilized by the royal family of Mysore. Besides, it displays paintings, photographs, and various items, giving an insight into the history of the city.

Situated next to the Krishnaraja Sagar Dam, Brindavan Gardens is another prominent tourist attraction. It is a famous garden in India. The gardens house a dancing fountain which is a primary tourist attraction. Adding colors to the beautiful gardens, a light and sound show is conducted every evening.

This zoo is one of the oldest zoos in India. It has a huge plantation, besides housing white tigers, rhinos and gorillas. It is a very famous attraction in the city.

The Wax Museum is marked by its uniqueness among other attractions. The museum exhibits various musical instruments, more than 300 ones which represent different states in the country.

Karanji lake is one of the most remarkable destinations in the city. It is filled with large numbers of tourists every year. Spread over an area of 90 acres, the lake is located in the foothills of Chamundi mountains, right behind Mysore Zoo. One can spot lots of migratory birds nearby this area.

The magnificent waterfall is one of the most beautiful waterfalls in India. It offers a breathtaking view of Shivanasamudra, around 85 kms away from Mysore.

There are many other attractions that you must visit during your trip to Mysore such as  St.Philomena's Church, Melukote, Jayalakshmi Vilas Mansion, Lalitha Mahal Palace, Kukkarahalli Lake, Datta Peetham, Namma Mysore, Ranganathittu Bird Sanctuary, etc.

The city has a tropical climate. The best time to visit Mysore is from the Monsoon and Winter months, from July to February. These months have very pleasant weather to enjoy the city. Besides, it is a great time to capture the beauty of the city. Summers are less ideal for visiting and sightseeing the city.

How to Reach Mysore

By Air: Distant 150 kms, Bangalore is the nearest airport to Mysore

By Rail: The city has a railway station, connecting it to various cities in the country.

By Road: One can easily drive on the Bangalore-Mysore highway. Besides, regular buses also ply to different cities from Mysore.

During your visit, there will be a variety of accommodation options that offer a comfortable and relaxing atmosphere. There are budget hotels, standard hotels and luxury hotels to choose from. All offer great facilities at a reasonable price. Here is a list of hotels to help you choose:

The Windflower Resorts and Spa