The Holi festival of colors in India is one of the religious of the festivals. Revelers take to the streets and spray people with colored powders and while dancing and making music. It is a celebration of the victory of good over evil, the destruction of the demoness Holika. Read More!

Into the Exotic, Kochi to Kerala Tour

The Holi Festival of Colors in India is a celebration of the victory of good over evil, the destruction of the demoness Holika. It is celebrated every year on the day after the full moon in the Hindu month of Phalguna which is early March. People celebrate the start of spring and other events in the Hindu religion; they march the streets and spray people with colored powders while dancing and singing. Celebrate the Holi Colors festival in India with our very own Trips To India!

Although it is a Hindu festival, it is popular among non-Hindus. People gather the night before Holi and perform religious rituals and then pray for the destruction of their internal evil. The next morning people start the real carnival traditions and smear each other with colored powders; they sometimes use water guns and water-filled balloons for more fun. Groups of people march the streets with drums and other instruments, singing and dancing. People also gather with their families and friends to color each other and share Holi delicacies.

The event lasts for a night and day, from the evening of the full moon (Purnima). Holika Dahan, the burning demon Holika, is the first evening of the event. On this night, people gather, perform religious rituals on a bonfire and pray that the evil inside them is destroyed the way Holika was killed in the fire.

The Original Story behind the Holi of Colors

The festival of Colors is celebrated all over India since ancient times. Originally, the festival was an agricultural festival, celebrating the arrival of spring. It represents throwing off the gloom of winter and enjoying the liveliness of spring. The legend associated with the festival involves an evil king called Hiranyakashipu. He forbade his son from worshipping Vishnu. However, Radhu proceeded offering prayers to the gods. Hiranyakashipu challenged Prahlad to sit on a pyre with his aunt Holika who was to be immune to fire. When the fire started, Holika was burnt to death whereas Prahlad survived without a scar. Burning Holika is celebrated as Holi.

The morning after also known as Rangwali Holi is where people smear each other with colors and enjoy delicious gujiyas together, sharing the love. Water guns and water-filled balloons are also a part of the celebrations, making every moment of the event memorable.

The Legend of Holi

The Festival is based on the Hindu legend Holika, the female demon and the sister of the demon Hiranyakashayap. It is believed that Hiranyakashayap was the ruler of the universe and also superior to all gods. However, Hiranyakashayap'sHiranyakashayap's son Prahlad went against his mother by following Lord Vishnu. This action left his father with no choice but to collaborate with Holika to kill him.

Prahlad escaped his fate with the saving hand of Vishnu while Holka died in the flames. But later on, Vishnu killed Prahlad and his mother and became King. The moral behind the story is that good always wins over evil.

The name festival of colors came from Lord Krishna's childhood antics. Lord Krishna was a reincarnation of the Lord Vishnu, who enjoyed playing pranks on girls from the village by drenching them in water and smearing them with colors.

There are other Hindu Traditions that are linked to this legend. For instance, Shaivism and Shaktism, where goddess Parvati awaits to bring back Shiva into the world while seeking help from the Hindu god of love Kamadeva and Vasant Panchami. However, the god of love shoots arrows at Shiva. This causes yogi to open his third eye and burn the Kama to ashes. The results of yogi'syogi's actions not only upset Rati Kama's wife but Parvati as well. Rati asks for forgiveness from Shiva. Finally, Shiva decides to forgive and restore the god of love, and on this day, Hindu celebrate it as Holi.

The significance of Holi

The Holi has a huge cultural significance in Hindu Culture. It opens a new beginning from past error, serving as the end of the conflict, and also a day when people forget and forgive. In most cases, people pay their debt and also forgive debts embracing new deals in their lives. 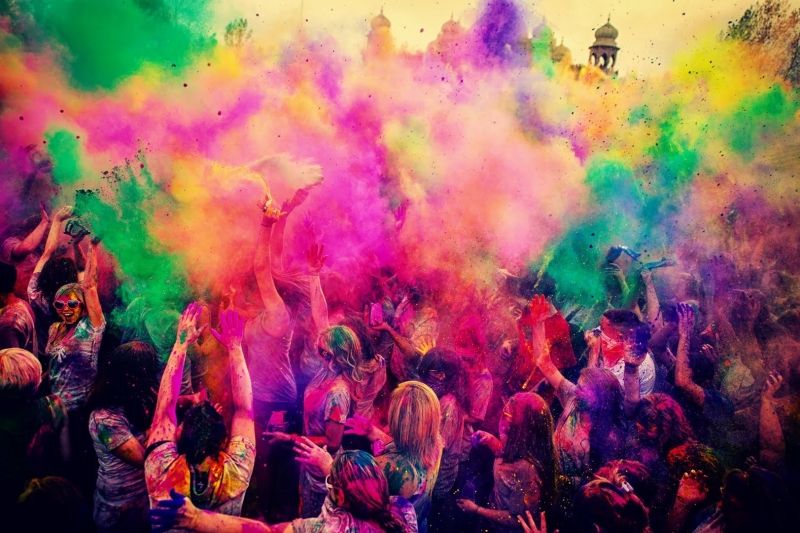 Before the Festival, people often gather wood and combustible material to light a bonfire in parks, in community centers and also in open spaces.  Preparation also involves stoking homes with food, party drinks and festive foods like mathri, malpuas and gujiya among many other foodstuffs.

The eve of Holi, the pyre is light to signify the Holika Dahan. People also gather around the fire, singing, and dancing.

There are numerous colors people use on this occasion. Traditionally, the user of a washable natural color is the best for this occasion. Some of the colors you can use include dhak, kumkum, turmeric, and neem. Moreover, water-based commercial pigments work as well, if you can't assess the traditional colors.

The Holi festival is celebrated across the whole of India with different traditions in each region. Generally, the celebration of Holi in North India, in the Golden Triangle of Delhi, Agra, and Jaipur, is more vivid than in the Southern part of India, which focuses on religion and temple rituals. The Holi celebration is witnessed in every nook of these cities. In Delhi, on the morning of the festival, people usher in a huge carnival; young and old people, men and women, go out to streets and smear colored powders and water at each other while singing and dancing, saying Holi hai (It is Holi). The best region to celebrate Holi is in the residential neighborhoods in South Delhi. The Holi Cow Festival, known as Holi Moo Festival, is a popular modern-day Holi celebration. It is a carnival of non-toxic colors, street food, thandai (a yogurt drink with spices), dance and music. 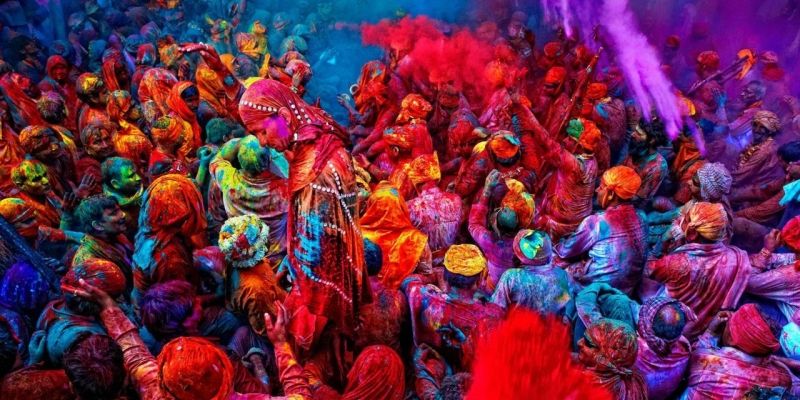 In West Bengal and Odisha, Holi is celebrated as Dol Jatra with complete dedication to Lord Krishna. In these regions, the mythology is entirely different. In which Lord Krishna is believed to have expressed to Radha on this day. In the event Idols of Lord Krishna and Radha are carried and smeared with colored powder, color as thrown at people and on the streets as well.

Presently the Holi Festival is celebrated not only in India but also in other states. The fun and the culture shared is an interesting experience that promotes social interaction among people of different backgrounds.

Expect a spectacular memory from the Festival of colors by having water rubbed and color powder thrown on your face. But ensure that you keep your mouth shut and eyes protected as much as possible while having the time of your life.

In Jaipur, the capital of Rajasthan, the celebration of the festival is nothing special. However, the Elephant Festival is what makes it exceptional. The Elephant Festival is celebrated every year on the eve of the Holi festival, featuring elephant beauty contests, elephant polo, and elephant dance. It starts with a traditional procession of elephants, beautifully decorated with glittering ornaments and embroidered velvets. However, the Elephant Festival was canceled in 2012, due to protests from animal rights groups. As an alternative, Rajasthan Tourism organizes an event for visitors on the lawns of Khasa Kothi Hotel. It features local Rajasthani folk music and colored powders, but with no elephants.

Other regions across India celebrate Holi Festival as well. Udaipur celebrates in the most luxurious setting. There will be an elaborate procession of the royal band and decorated horses, from royal residence to Manek Chowk at the iconic City Palace. Later, people lit the fire and burn a Holika statue. It features folk dances, drums, singing, cocktails, and dinner. In Pushkar, in Rajasthan, Holi starts in the eve of Holi with a big bonfire, where local men gather around a bonfire, throw garlands and wooden branches. When the flame dies out, everyone takes pieces of burnt embers to their home as a symbol of good luck. The color festival starts on the morning of the Holi.

Moreover, in Varanasi, the holy city of India, people celebrate with much enthusiasm. The day before Holi, people light a bonfire and throw wood into the fire and throw the paste called ubtan after rubbing their bodies, as it is believed that the practice keeps them in health for the rest of the year. On the day of Holi, people play with colors until the afternoon, but some people play with mud instead. In Mumbai, the Holi festival is a major. Mumbai has the same tradition of Agra’s Vrindavan and Barsana, where they hang a pot of buttermilk, and then men form a human pyramid to break the pot. Who breaks it is called Holi king of the year.

In Agra, the festival is celebrated in the same way as it is celebrated in neighboring places such as Mathura, Vrindavan, and Barsana. In Vrindavan and Barsana, the festival is celebrated with special puja and traditional celebrations to worship Lord Krishna. The celebrations include a tradition called Matki Phod, which means breaking the pot. A pottery pot is filled with buttermilk or other diaries that are hung in the street. Then a group of boys and men form a human pyramid, balancing on each other’s backs and shoulders to reach the pot and break it with the head of the one at the top of the pyramid. Girls and women surround them, sing songs and throw colored water to distract them and make it harder. In Barsana, people celebrate Lath Mar Holi in the Radha Rani temple. Women beat men with sticks where men protect themselves with shields.