Diwali is a five day festival of light, celebrated during the Hindu Lunisolar month (between Mid-October and mid-November). This is one popular festival celebrated by millions of Hindus, Jains, and Sikhs around the world. The name Diwali also spelled as Divali is derived from the Sanskrit term Deepavali, meaning row lights; the festival is associated with Lakshmi (the goddess of property) and is celebrated as a form of worship to the goddesses of India.

Spiritually Diwali symbolizes the victory of light over darkness, knowledge over ignorance, and, most importantly, good over evil. Lakshmi, as the goddess of wealth, generally symbolizes three virtues, property, abundant crops, and fertility. In this festival, merchants search for Lakshmi's blessings in their farming and families by bringing an offering to the goddess and also give thanks for the recent harvest.

The festival lasts for five days and is celebrated by Hindus, Sikhs and Jains across the world. Diwali coincides with the Hindu New Year, celebrating new beginnings and the triumph of light over darkness. The festival is determined by the Hindu lunar calendar. It usually falls in the early autumn, the period between the middle of October and the middle of November, directly following the summer harvest, which comes with the new moon. It also marks a fusion of harvest festivals in ancient India.

The actual day of Diwali is celebrated on the third day of the festival. Each faith has its reasons to celebrate Diwali. However, there is one popular story told. It is a legend of Lord Rama and his wife Sita returning from exile to their kingdom in northern India, after defeating the demon king Ravanna in the 15th century BC. 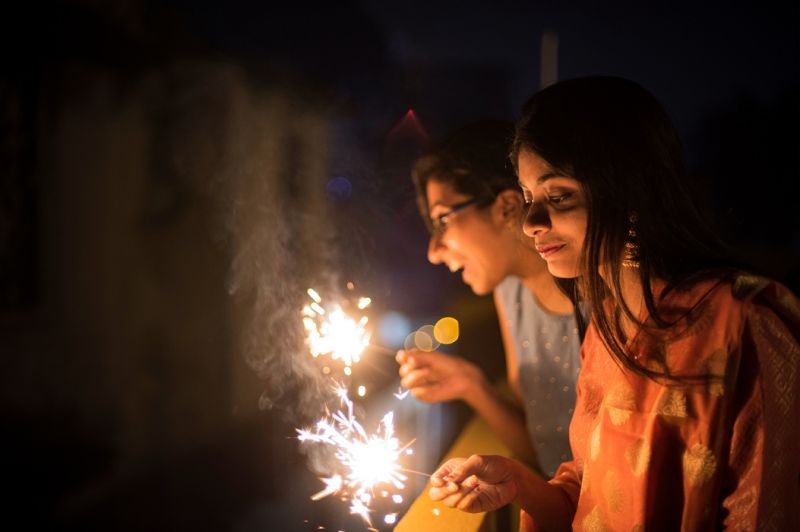 The festival is featured by large fireworks displays. Families and friends share sweets and gifts during the festival. There is a belief in giving food and goods to those in need. As the people who celebrate Diwali considers it as the beginning of a new year, they have the traditions of cleaning their houses and buying new clothes. They light traditional earthen candles and decorate their houses with colorful rangoli artworks which is patterns created on the floors using colored rice or powder.

Before the festival, celebrants prepare themselves by renovation, cleaning, and decoration of homes and workplaces. This action makes them presentable before the goddess of property and wealth. It is also in preparation for the visit from the goddesses. At the peak of the festival, revelers dress in the most elegant clothing and illuminate their home's interior and exterior with oil lamps known as diyas. This is followed by worship to Lakshmi, light fireworks, family feasts, and not forgetting gifts to grace the occasion.

With its origin going back to the Indian subcontinent, the Diwali festival is celebrated eight days after the Dasara, Dasani (Dussehra) festival. On the fourth day, the primary Diwali festival day marks the beginning of a new year based on the Vikrama calendar. On this day, merchants will perform religious ceremonies and open new account books. This is generally the time for visiting, exchanging gifts with friends and family. 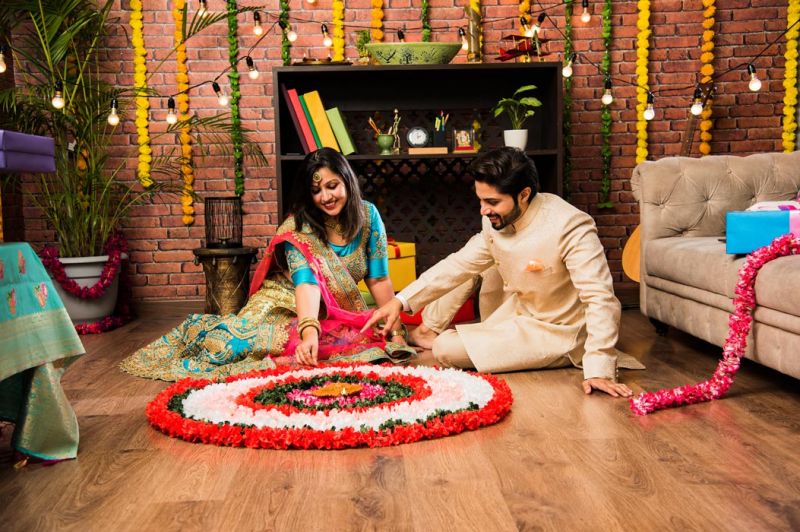 Traditionally, each day of Diwali has a different focus. On the first day, the celebrations start with Dhanteras. On this day, Indians clean, decorate their houses and buy new clothes, preparing for the festival. The second day is also for preparations, but small rituals are celebrated on the first day of rituals. People prepare their houses with Rangolis, designing their floors with colored powder and flours. They adorn their front doors to welcome their guests for Diwali.

The third day is the most important day among them all; it is where families and friends gather, exchange gifts and lit up candles and small oil lamps that last for the whole night. Then later at night, people go out in the streets and light fireworks to celebrate New Year’s Eve. On the fourth day, New Year’s Day, relatives and friends visit each other, exchanging sweets and gifts. Lastly, the fifth day, called Bhai Dooj, is dedicated to brothers. Sisters cook for their brothers, put red dots on their foreheads and take blessings and bond.

Diwali is celebrated all over the country of India. In Varanasi, one can watch the amazing aarti and let off fireworks by the Ganges River. In Jaipur, the markets are lit up completely, being an absolute visual delight during Diwali. Goa has a crazy gambling scene and a tradition of burning effigies of the demon Narakasura. Although the city of Amritsar is basically Sikh, it is known for its Diwali celebrations, especially the Golden Temple. 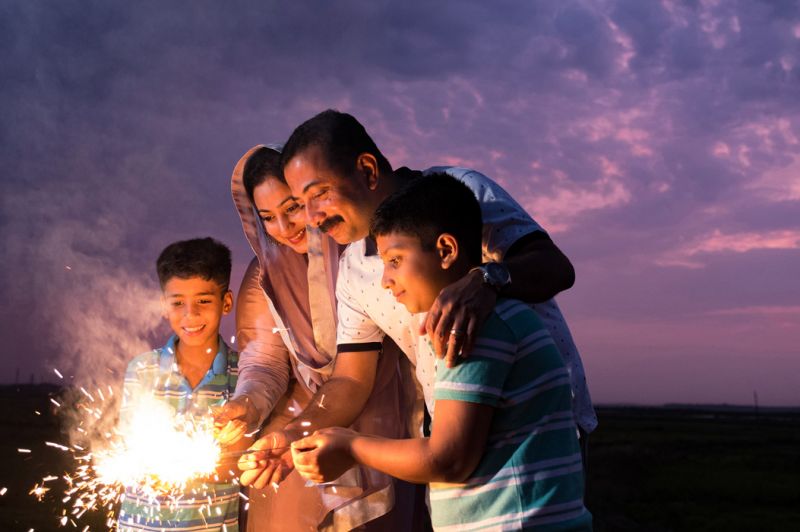 Some faiths in India celebrate their respective festivals alongside Diwali. For instance, the Jains will observe their own Diwali marking the final liberation of Mahavira. As for the Sikhs, Bandi Chhor Divas marks the release of Guru Hargobind from the Mughal Empire prison. The Bengali Hindus will celebrate Diwali worshipping Goddess Kali.

In Hinduism, the festival is associated with different traditions and symbols. According to one legend, Diwais is the day Rama, Sita, Hanuman and Lakshman arrived at Ayodhya after an exile after the defeat of the demon king Ravana's army by Rama's army. This was after 14 years of exile. According to another legend, this was when Krishna Killed the Demon Narakasure, the evil king of Pragjyotishapura. The Hindus of eastern India relate this festival with Durga, the goddess who symbolizes victory over good and evil. Indeed, different Hindu traditions have their own mythical tales regarding this festival. However, the most popular reason for this festival is the worship of the goddess of wealth, Lakshmi, the goddess of wealth.

As for the Jain tradition, Diwali is celebrated to mark the physical death of Mahavira. Moreover, Jainism was founded by Lord Mahavira. But this event is celebrated as Maksha.

As for the Buddhists, Diwali is a festival of the Newar people of Nepal, but not for most Buddhists. They celebrate this event by offering prayer to Lakshmi, observing the same way as the Nepalese Hindu Diwali Tihar festival.

During this event, Gambling is encouraged to promote good luck in the coming year, and this also serves as a memory of dice games played by Lord Shiva and Parvati on Mount Kailasa. Also, in mind of similar contests between Radha and Krishna to mark the beginning of a new year.

As India's biggest annual celebration, the streets are filled with light and decoration. Some people also observe Rangoli( in Diwali), which are attractive patterns of powder and flowers placed on the doorsteps to welcome the gods into their home and bring good luck.

Outside India, the city of Leicester holds the largest Diwali celebrations in the United Kingdom, with a crowd of people on the streets to enjoy light music and dancing.

Last but not least, these celebrations are for all Hindus in and outside India. It's a chance to gather in the Mandirs and leave offerings to the goddeses as a form of gratitude and good luck .Moreover, it’s also a fantastic event to share, and that’s why most people celebrate this event with family and friends and share gifts.