Hyderabad city is located in Telangana state in central India. Hyderabad is known for its historic legacy and cultural diversity. Hyderabad is the most populous city of the state of Telangana.

Hyderabad city is located in Telangana state in central India. Formly, the city was the capital of Andhra Pradesh state. However, the creation of Telangana from Andhra Pradesh made the city serves as a capital of both states. Hyderabad is known for its historic legacy and cultural diversity. Hyderabad is the most populous city of the state of Telangana, making it the 4th largest city in India. The culture of the city is a combination of mannerisms of its settlers, resulting in language, lifestyle and tradition diversities. Hyderabad is one of the safest cities in the world. Crime rates of the city are very low; it is safe to walk in any time of the day or night.

Hyderabad city is known for its rich history. The city was founded by the Qutb Shāhī sultans of Golconda. The glory of the city lasted during Qutb Shāhī’s dynasty reign. In 1685, the Mughals conquered Hyderabad. The city was known for its beauty, but the Mughal occupation resulted in its destruction. It was followed by European intervention in Indian affairs. Asaf Jah Nizam al-Mulk, the Mughal viceroy in the Deccan, declared independence in 1724. With Hyderabad as its capital, the Deccan kingdom became the princely state of Hyderabad.

Since Hyderabad city is known for its religious and cultural diversity, it has a mixture of religions. The main religions are Hinduism, Islam, Christianity and Buddhism. The city boasts a distinctive mosques, Hindu temple gods, magnificent churches and distinctive architecture of Gurudwaras. Additionally, the city is a multi-lingual city. The four languages spoken in Hyderabad are Hindi, Urdu, Telugu and English. English is the language of business and administration. Most of Hyderabad people are bilingual; they speak English as well as their mother tongue.

Trips to India is a great way to discover the land of great ancient civilizations and a leader of today technology world! 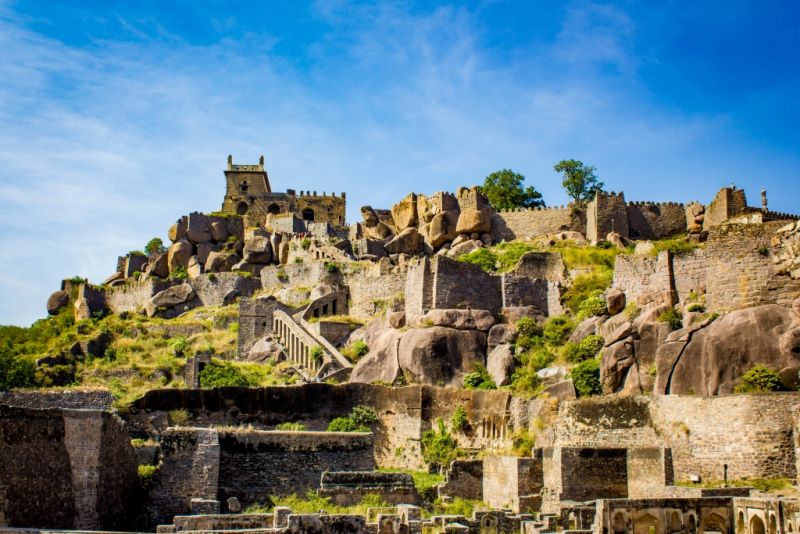 Hyderabad is famous for its arts, mosques, churches, temples, monuments historical places and food. The city’s diversity is also reflected in the architecture. The monuments and places of worship display the unique artistic blend of Hinduism and Islam. Charminar is one of the structures that represent the architecture blend. Charminar consists of four towers, with domes over it. It has a staircase that leads to the upper floors of the structure. The structure used to house a mosque and a religious place of study in the first floor.

In addition, Qutb Shahi tombs, known as Seven Tombs, has a number of tombs dedicated to the rulers of the Qutb Shahi dynasty. The design of the tombs vary, as some of them are really simple while the others have carvings on them. The tombs also vary in their size. Another monument in Hyderabad is Salar Jung Museum, the most visited museum in the city. The museum is known for its collection of sculptures and paintings. The museum has antiques that range from carvings, textiles, metallic artifacts, different types of clocks and furniture. Most of the items displays at the museum belong to Salar Jung family; the remaining items were shipped from countries such as Egypt, Japan, China, Persia and Europe. Additionally, Mecca Masjid is the biggest and the most breathtaking mosque of Hyderabad. It is one of the largest mosques in India; it is listed as a heritage building.

Dance and music depict the unique culture of Hyderabad, serving as a window to the history of the city. The three main gurus of Classical Carnatic music are Saint Tyagaraja, Muthuswamy Dikshitar, and Shyama Shastr. They belong to Andhra Pradesh. Kuchipudi is the official dance form of the city; it is a combination of poetry, dance and acting, accompanied by Classical Carnatic music.Hyderabad celebrates a wide number of festivals every year. Festivals gather people from different communities. There are cultural programs with ghazal nights. People also celebrate religious festivals such as Muharram and Diwali. What makes it more valuable and fascinating is how people with different ethnicities goes out and celebrate different festivals.

Furthermore, Hyderabad is such an important trade centre; and it is an international centre for information technology. Cigarettes and textiles are among the items manufactured in the city. Service activities have expanded, especially those associated with information technology, making them the major source of contribution to the city’s economy. Additionally, tourism has grown. The city is associated with Telugu language movies production, giving rise to its “Tollywood” nickname.

The city of Hyderabad has good transportation facilities, as there are air and rail services to Delhi, Mumbai, Chennai, Kolkata and Bengaluru. Moreover, the climate of the city is warm to hot. It is characterized by wet and dry periods, with moderate annual precipitation. Most rain falls during June to October, the monsoon months. The best time to visit Hyderabad is between the months October and February. It is advisable to wear light and summer cloths made from cotton during visiting Hyderabad.