Muharram Festival is a celebration of the first month of the Islamic calendar. Some Muslims fast during daylight hours on the ninth and 10th or 10th and 11th days of the month. Muharram month is recognized as the second divine month after Ramadan. The month denotes the blessed day of Ashura.

As the first month of the Islamic calendar, Muharram marks the beginning of a new Islamic year. This month is the second holiest divine month, right after Ramadan. Muharram is also one of the four sacred months which are mentioned in the Quran, with the seventh month of Rajab and not forgetting the eleventh and twelfth months of Dhu al-Qi' dah and Dhu al-Hijjah.

A brief history of Muharram

Going back fourteen centuries on the day of Ashura, Imma Hussein, the grandson of Prophet Muhammad and his little son were brutally murdered by a cruel ruler in the battle of Karbala. It was also troubling times for his family, as well. After the death of Imma Hussein, the remaining members of the family were imprisoned and treated harshly.

Even though Hussein died in the battle, his message of justice, equality and kindness were spread among the people who loved him. That is why Muslims recognize this day all over the world.

The adjective, Muharram means, forbidden, illicit, impermissible, and unlawful, and many more. In this case, warfare is forbidden as the festival proceeds.

How the day is observed

During the tenth day of the month, which is also known as Day of Ashura, Muslims mourn, and practice fasting.

The Shia Muslims mourn martyrdom and his family at the same time honoring martyrs by prayer and abstinence from fun. It is also believed that fasting during this festival atones the sins of the coming year. However, some people would break the fasting after Zawal to pay their respect.

On this day, not all Muslims groups observe the same traditions. Some Muslims consider Muharram as the month of mourning or celebrating the battle of Karbala. Imam Hussain Ali, the grandson of Prophet Muhammad, was believed to have been killed on this day. This is one reason why the entire Shia Association whips themselves with sharp objects on their both heads and backs, considering Muharram as a sad occasion. However, the Sunni community only celebrates the event by fasting. They don't take part in the rituals but observe the day honoring the prophet Moses.

Locally known as Mappilas, these Muslims constitute 25% of Kerala's populations. The Kerala Mappilas reside in the regions of Calicut and Malappuram district, and they mainly celebrate the event in memory of the tragic death of Imam Hussein Ali. Often the Muslims in Kerala are seen beating their chest while crying out Ya Hussein while in public. The Muslims engaging in the Tazias wear tiger masks on their bodies to appear like tigers. 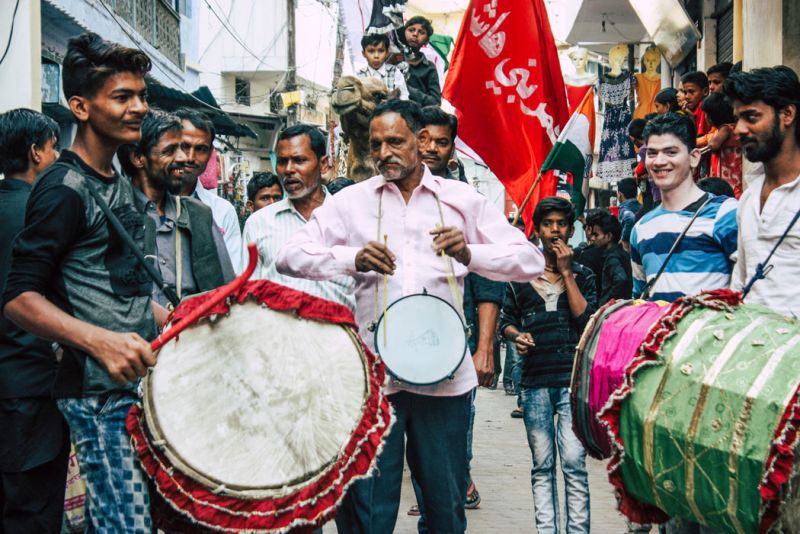 In Hyderabad, 90% of the population celebrates Muharram to pay their respect. During Muharram, the Shia communities prepare a procession that begins from Dabeerpura Flyover, going all the way to Alawa-e-Sartouq Mubarak (Darushafa). The parade is accompanied by the arranging of short Majilis followed by the removal of Majilis black flags replacing them with red flags.

It is also customary to read the Ziarat Ashura, which are the book containing salutations to the martyrs of Karbala on this day. The prayer salutation is dedicated to the shrine of Hussain ibn Ali and the battle of Karbala.

In India, Muharram is considered a holiday (a day off for most workers in India). This means that government offices, banks, and post offices are closed, with other businesses operating on reduced hours. On this day, large meetings and parades fill the streets, so it would be a bad idea traveling as the event runs.

According to the Islamic calendar, Muharram month begins with the first crescent of a new moon. However, compared to the solar year, the Islamic lunar calendar is relatively shorter by 10 to 11 days.

Muharram is of high significance to the Muslim culture, and it serves as a door to new beginnings and new opportunities in the coming year. During this festival, Muslims also pray for forgiveness of sins and, most importantly, commemorate Hussein ibn Ali.

Hussein's death commemoration promotes social cohesion, Islamic identity, and even tourism. To the Minangkabau people, located in the central regions West of Sumatra. Tabuk is a remembrance of Muharram. Generally, the Tabuik tradition is a result of two communities of Padang Pariamans. Luckily, their government also steps in, to promote the organization of the event.

The Muharram festival is undoubtedly an exciting event. A chance to explore the journey into an Islamic year and culture with the commemoration of imman Hussain ibn Ali.