King Khufu or Cheops is the most famous king of the 4th Dynasty. He was the son of Snofru and Hetepheres I. Know more about Kings of Ancient Egypt!

Dynasty: Cheops is the second and most famous king of the 4th Dynasty.

History: He was the son of Snofru and Hetepheres I. He at least had two wives, probably even as much as four, with whom he had several children. Queen Meritates bore him Kawab Hor-djedef, Hetepheres II, and Meresankh II . With Henutsen, Cheops had Re-khaf (the later king Chephren ) and Khufu-khaf as children. Other children of Cheops are Re-djedef, who would succeed Cheops as Djedefre, Hor-baf, who is sometimes supposed to have become the otherwise unattested king Bakare, and Khamernebti I.

According to Manetho and Herodotos, Kheops would have ruled for 63 years. The Turin King-list, however, only notes 23 years for the successor of Snofru. Although the name of the king on this line is missing, it does apply to Cheops, being Snofru's successor.

Like his father, Cheops seems to have been intent on establishing a more or less permanent military presence in the Sinai, probably to prevent the Bedouins from interrupting the work in the turquoise mines. An inscription in Aswan demonstrates Cheops interest in this region as well, as it was the main quarry of the granite needed to build his pyramid. A stela found near Abu Simbel and some fragments of an alabaster object found in Byblos, indicate some commercial activity with Nubia and Palestine.

Following his father's example, Kheops again built his funerary monument away from his predecessor's. Building activity was moved from Dashur to Giza, to the North of the capital Memphis. There he built the monument that has made him one of the most famous kings of the Ancient Egyptian history: the great pyramid of Giza.

Herodotos account of thousands of slaves laboring for 20 years to build this monument, is now seen as incorrect. It is now accepted that the harder labour, such as moving and placing the granite and calcite blocks, was done by farmers during the annual 4-month inundation of the Nile Recent discoveries have shown that they were housed and paid and that they were even buried near the pyramid of the king, so that they could be part of the king's eternal life after death.

Herodotos, however, did not invent Cheops bad reputation. This had, in fact, become part of the Egyptian tradition centuries before this Greek traveler visited Egypt. The Middle Kingdom story recorded on the Westcare papyros, which shows Snofru as a wise and kind man, describes Cheops as a cruel and tyrannical ruler, with no respect for life. 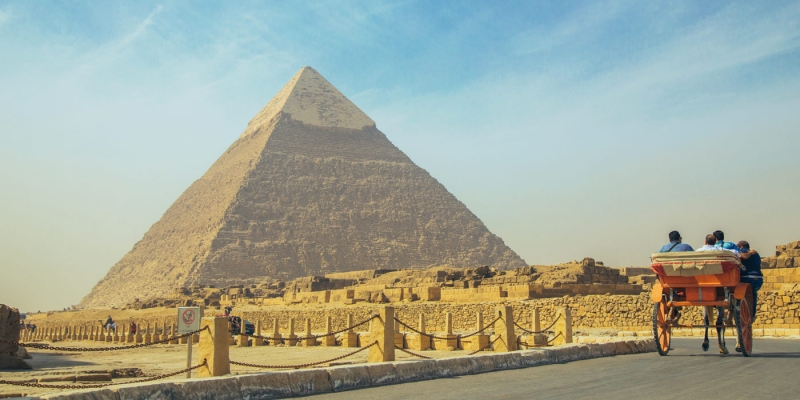