Trip to Abu Simbel by Coach

This site, Abu Simbel Temples, south of Aswan along Lake Nasser’s shore is the most famous in all of Egypt after the Giza Pyramids. Built by the greatest of the pharaohs, Ramesses II, which made it also known as the Temple of Ramses II or Ramesses II, these huge rock-cut temples marked the southern boundary of the Egyptian Empire with Nubia at the peak of its power during the New Kingdom.

They were meant to convey the power of Egypt’s rulers to anyone who laid eyes upon them. The four statues guarding the doorway to the larger of these temples are the largest sculptures that survive from the ancient Pharaonic era.

Where are the Abu Simbel Temples located?

The Abu Simbel Temples are located at Abu Simbel, a small village of Aswan in Upper Egypt near the border with Sudan on the western bank of Lake Nasser.

Why were the Abu Simbel Temples built?

The twin temples were built to serve as a lasting monument to the king and his queen Nefertari, and commemorate his victory at the Battle of Kadesh. 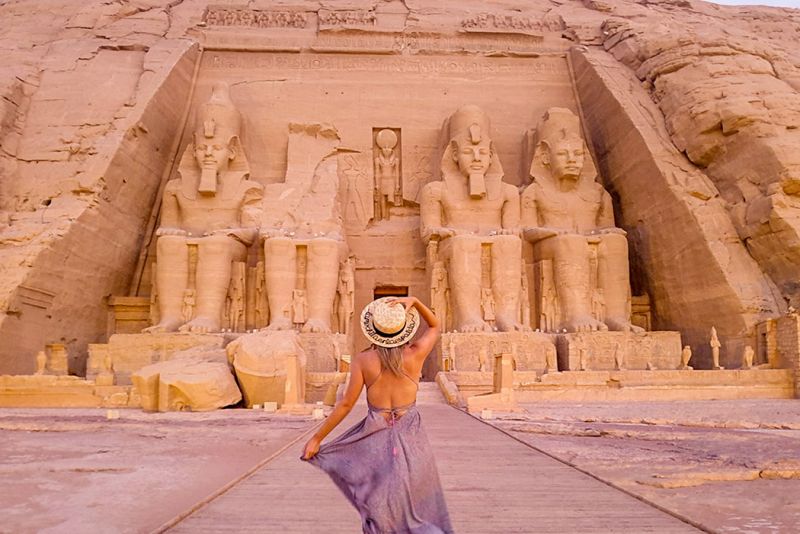 The Rediscovery of the Abu Simbel Temples

After being lost form civilization for a while, the Abu Simbel Temples was rediscovered in 1813 by Swiss explorer John Lewis Burckhardt. The temples had long been forgotten and the sands of the desert had covered all but the tops of the heads of the huge statues in front of their entrances.

Since 1909 when the sand was finally cleared away, these twin temples have become the most famous site in Egypt’s south. 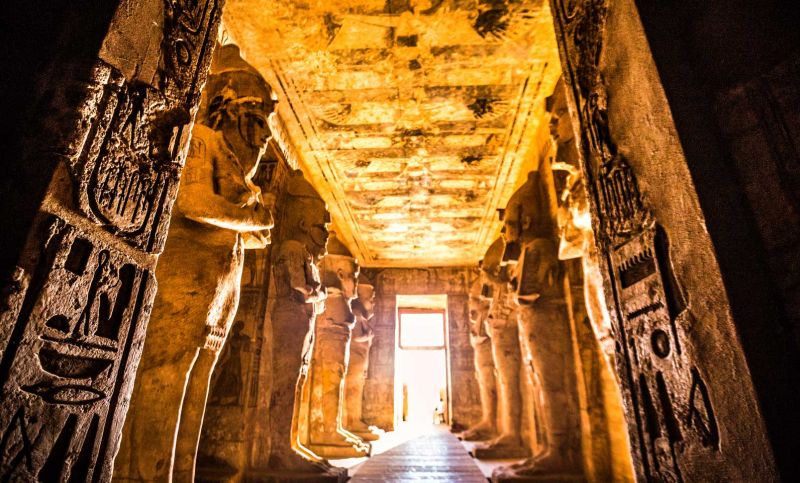 Relocation of the Abu Simbel Temples

The Abu Simbel Temples were dismantled and relocated in 1968 on the desert plateau 64 meters above and 180 meters west of their original built site. Moving the temples was not a job; it was massive work. It included cutting the temples into pieces between 3 to 20 tons in weight and reassembling them precisely as they were at the new site. It took almost five years to finish the relocation. 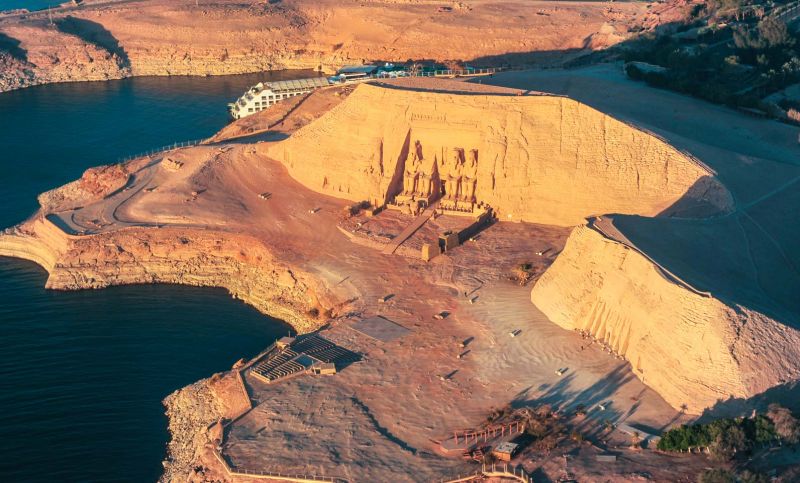 The Great Temple at Abu Simbel took around twenty years to build. Also known as Temple of Ramses II, it was dedicated to the gods Amun, Ra-Horakhty, and Ptah, as well as to the Great King Ramesses himself. It is generally considered the grandest and most beautiful of the temples commissioned during Ramesses II’s reign, and one of the most beautiful in Egypt.

The entrance to the Great Temple is flanked by four colossal statues on its facade, 20 m statues, each one representing Ramesses II seated on a throne. The façade of the main temple is decorated with hieroglyphs that commemorate the great victory of Ramses II at the Battle of Kades.

Upon entering the great temple, there are a series of rooms, dedicated to Ramses himself and important members of his family. The final room, the sanctum sanctorum, remains in darkness every day except two days a year. This was not done by chance, it was necessary a broad knowledge of science, mathematics, architecture, and astronomy to achieve this result.

The second temple, the Small Temple, is dedicated to the goddess Hathor. Although significantly smaller than the first, it was built to honor Ramses' favorite wife, Nefertari. The queen appears on an equal footing with the pharaoh. It’s also known as the Temple of Hathor and Nefertari.

The rock-cut façade of the temple is decorated with two groups of colossi that are separated by the large gateway. 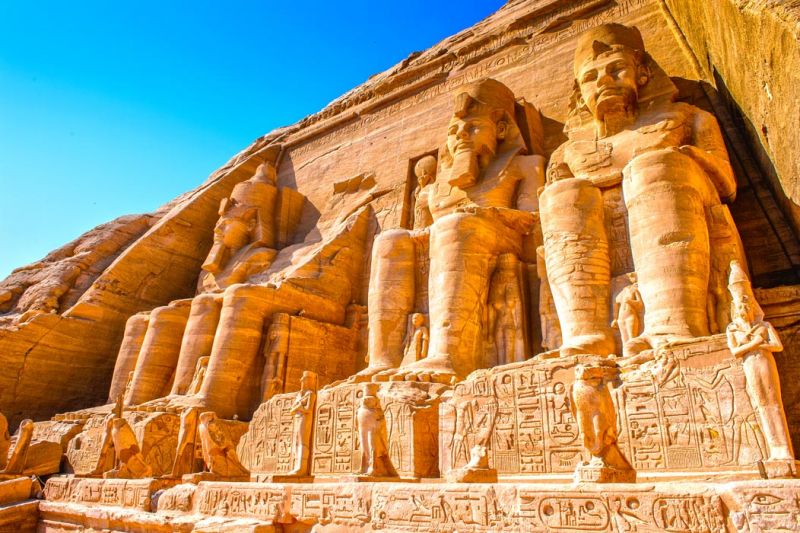 Alignment of the Sun with the Temple of Ramses II, Abu Simbel

The larger temple is aligned with the sun, so twice a year the sun shines in its deepest recesses to illuminate a statue of Ramses and the gods to which the temple is dedicated.

The ancient architects positioned the temple so that sunlight reached the room on February 22, the anniversary of his accession to the throne and on his birthday, October 22. On these two dates, the sun rises and illuminates the temple corridor, and three of the four statues in the sanctuary. The first three statues are of Pharaoh Ramses II, Ra (the god of sun), and Ammon (the king of the gods). Ramses was included with the gods because, like the other pharaohs, he considered himself a god. The fourth statue remains in darkness because it represents Ptah, the god of darkness. This statue has never seen sunlight in more than 3,200 years. 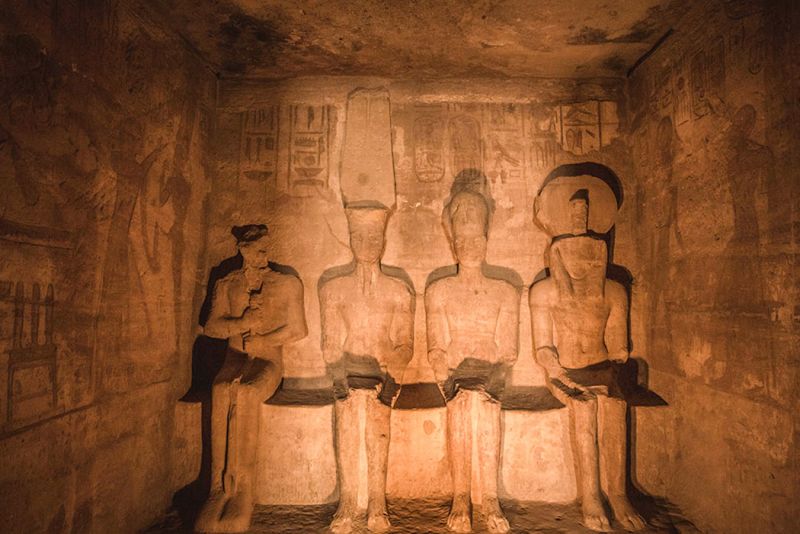 What is the Abu Simbel Sun Festival?

Twice a year, people from around the world gather at the Temples of Abu Simbel to celebrate the ancient Egyptians and all that they accomplished. Aptly named Sun Festival, the central chamber of the temple is illuminated by the sun.

When is the Abu Simbel Sun Festival?

The Abu Simbel Sun Festival takes place on February 22nd and October 22nd of every year to much fanfare with several thousand people gathering early in the morning to see this testament to the knowledge and skill that the ancient Egyptians possess in order to align the temple so perfectly.

How to get to the Abu Simbel Temples?

The temples are located several hours drive, south of Aswan, but most tourists actually arrive at Abu Simbel by plane. The flight from Aswan is only 30 minutes and there are two flights a day, timed so that tourists will have about two hours to spend at the temples.

It is also possible to visit Abu Simbel by joining a Lake Nasser cruise. These ships moor just in front of the temples so that passengers have a chance to see the temples by moonlight and in the early morning light. 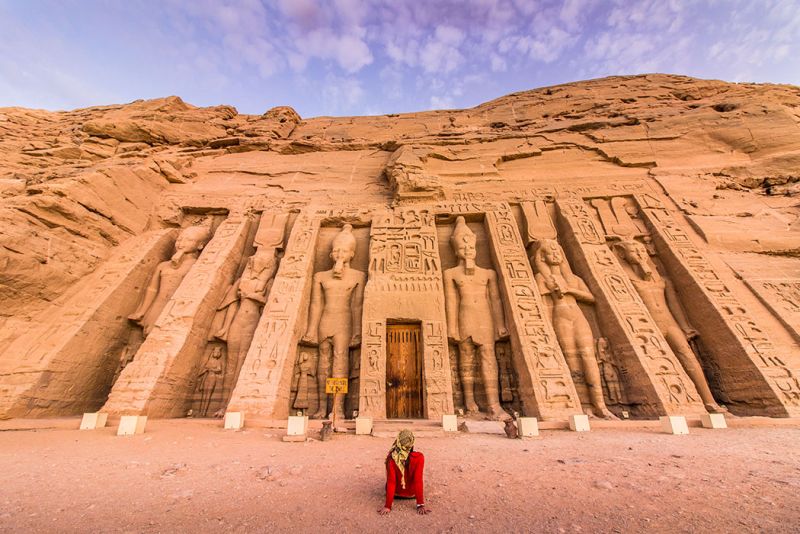 Visit one of the greatest temples of ancient Egypt by booking one of our tours during Egypt vacation.

St. Simeon Monastery and the Tombs of the Nobles