The Great Sphinx of Giza

Looking for Great Sphinx Facts? Click here to know when, how and why Sphinx was built?

from
$1959
The History of the Great Sphinx statues :
This kind of statues appeared for the first time in Egypt as scenes with two dimensional representations in the beginning of the dynastic period. However, the first representative of the king in the form of a sphinx was in the Middle of the 4th dynasty.
The first king who had a sphinx statue was King Djetef Ra, the successor of King Cheops, and it is considered as the 1st royal representation in the form of a sphinx. It was discovered nearby his pyramid at Abu-Rawash in El Giza and it is now kept in Louvre Museum.
While the largest representation was the Great Sphinx at Giza plateau, however the great sphinx itself is considered as the 1st representation of a royal sphinx in ancient Egypt depending on the fact which says that the great Sphinx belongs to king Cheops not Chephren comparing between the artistic features appeared in the sphinx statue and those artistic features of Cheops, so we found the following:

- Style of the Royal headdress "Nemes" was pleated all over its surface. While those of Chefren were partly pleated.

- The Nemes it self was decorated with strap represented in high relief and its begging over the forehead in all the statues of Chephren and all the Kings afterwards, while the Great Sphinx itself had no decoration or even this strap over the fore head.

- The false beard, which is preserved now in the British Museum and Cairo Museum, it was represented plaited and curved, this type of divine false beard appeared in the New Kingdom which make the scholars to suggest that it was added as a separated part later during the New Kingdom in order to make the statue represent the divine form of a god who is Re hr 3hty as during this period the sphinx wasn't belonging to Chephren but it was Re hr 3hty.

- While an opposite opinion said that the sphinx belong to king Chephren as his name was mentioned twice on dream stela of Tuthmosis IV and his father Amenhotep II, while the name of Cheops was mentioned only one time. 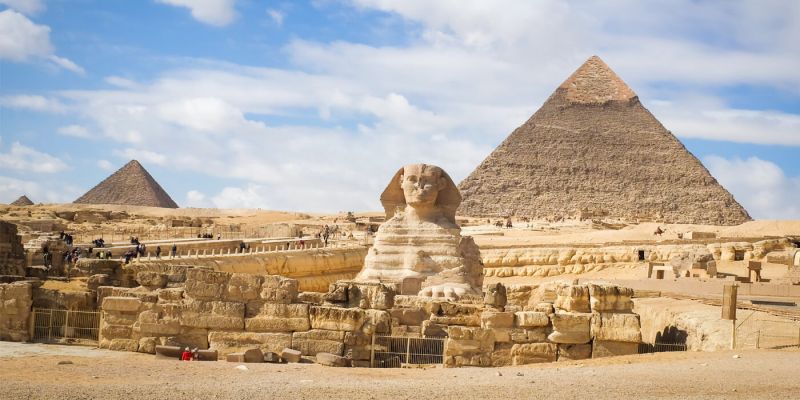 The development of the Sphinx statues in Egypt :
During the Old Kingdom :
The sphinx statues were represented as a human head and body of a lion with the false royal beard and the names headdress.
During the Middle Kingdom :
It was just representation for the king in the form of the Sphinx and the human head surrounded with the lion mane. The 1st King who represent him self in the form of a sphinx with lion's mane was Amenemhat III , in the second half of the 12th dynasty, Middle kingdom.
During the New Kingdom :
The sculptures continue the Middle Kingdom methods, but they had added their touch which is the transforming of the fore legs of the declining lion into human arms holding a cult objects. Te first King who represented himself in such form was King Amonhotep III.
This statue was discovered in the Templeof God Montuin the Karnakcomplex. There was a new artistic feature appeared for the firat time; decorating the body of the sphinx with wings, this appeared for the firt time during the reign of king Amonhotep III
The meaning of the "Sphinx":
The word "Sphinx" is the Greek word of the original Egyptian name "Ssp Ankh" which means the living image, according to this name we can suggest that they mainly represent the king I his living image which the combination between the mental power and the Physical power. The mental power represented in the human head while the physical power represented in the Lion's body. If the sphinx is God, so it is said that the ancient Egyptians managed to tame the violent characte5r of the lion with the human intelligence turning it into a divine calm power.
The religious function of the Sphinx avenue:
Since the beginning of the 4th dynasty the sphinx statues were considered guardians of the cemeteries and it clearly appeared in the position of the great sphinx in the beginning of the royal cemetery at Al Giza Plateau. Moreover the royal sphinxes as well as the divine sphinxes were considered as protectors for processional routes connecting between two temples such as the sphinxes of the Karnak temples and also the templeof God Ptahand the serabium temple at Memphis.
This function is the representation of the life cycle, according to one of the book of the dead chapoters. They represent two sphinxes back to back one of them was called Sp while the other one is called Dwa and between them the 3ht. "Sp " means yesterday, "D3w " means tomorrow , and "3ht" means today. Comparing between this representation and the sphinx avenue, we will find that Sp on the right hand side, D3w on the left hand side and the 3ht is the route itself.
Female Sphinx statues:
Since the second half of the 12th dynasty, most of the powerful queens and princesses stared to have their own sphinx statues. The most famous sphinx statue for a lady or a queen was the sphinx statue of Queen Nefertiti wore a hair wig instead of Nemes and it was discovered in the eastern part of the Karnak complex near the ruins of the remaining parts of Aton temple.
The sphinx statues continued to be produced for the Kings even during the Greek Roman period, and most of the Roman emperors got the Egyptian sphinxes and transported then to Europein order to decorate their cities and palaces.

Abusir Pyramids & The City of The Dead Egypt

How much is a Camel Worth in Egypt?!

Where is King Tut now?

The Mosque of Muhammad Ali Pasha in Cairo

The Great Sphinx of Giza