- Fort Qait Bey
Built by Mamluk Sultan Abdul-Nasser Qait Bey in 1477, this fort was constructed on the foundation of the Pharos Lighthouse-one of the ancient Seven Wonders of the World.

- Bibliotheca Alexandrina
Located on the east of the Corniche, it is the best-known library for the ancient world and is built on the foundation of early Library of Alexandria.

- Greco-Roman Museum
A museum dedicated to rare collection of antiques like the Apis Bull and the two headless sphinxes. But the high point of this museum is its extensive collection of Coins dating from 630 BC to the Ottoman period in the 19th century all in a chronological order.

- Corniche
This is a popular beachfront venue having various beaches like Ma'amura, Sidi Bishr, Glymonopolou and Ibrahimia and casinos.

- Pompey's Pillar
Built in the honor of Emperor Diocletain in 297 AD, this pillar is made of red granite and has the height of 25 m.

- Roman Catacombs at Kam-el-Shuqqafa
This is the largest cemetery of Roman that dated back to 2nd Century and was built by cutting rock to a depth of 100 ft in three levels that represent the Pharaonic and the Roman art. 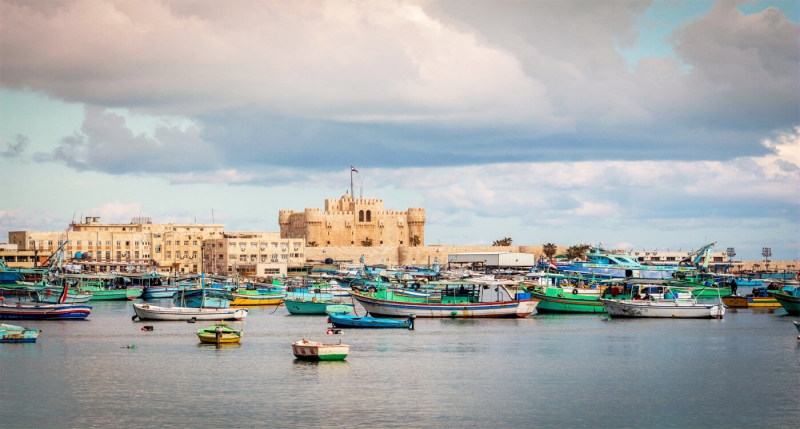 Located on the eastern bank of the Nile River, Aswan is the third largest city of Egypt. Aswan is the name given to this city by Arabs, earlier name of the city was "Suno" meaning 'the Market'. Situated in the Upper Egypt sightseeing of Aswan provides one of the most beautiful scenarios of Egypt with the eye-catching location of town on the eastern bank while desert as the companion on the western bank.The two most breathtaking destination sites of Aswan town are the two main islands-Kitchener and Elephantine. Former is a botanical garden while the later is a historical site having ruins of buildings and a museum.

- Aga Khan Mausoleum
Situated over the top of a hill located on the west bank, Aga Khan Mausoleum provides the most fascinating view of the Aswan town. Built on the designs of Fatimid Tombs of Cairo it has marble work in the inside.

- Dier Amba Sama'an (Monastery of St. Simeon)
Built in 10th century but was destroyed by Salah-al-Din in 1173 AD and was reconstructed again in the same century this monastery contains Frescoes of Apostle in the roofless basilica.

- Tombs of Nobles
Located on the northern hills of the West bank of the river Nile these tombs belong to the princes of Old Kingdom. The highlights of these tombs are their rock carvation and the interiors decorated with fascinating bright-colored paintings.

- Kalabsha Temple
Built by the Roman Emperor Octavius Augustus this temple was made of sandstone and was shifted from Nubia to the present location along with other monuments also. This temple is dedicated to the Fertility God Mandulis.

- Ishle Temple of Philae
This temple is dedicated to Goddess Isis and has various fascinating shrines and sanctuaries. The present location of the temple is Agilika Island while originally it was located 500 m far from the Agilika Island, on Philae Island. 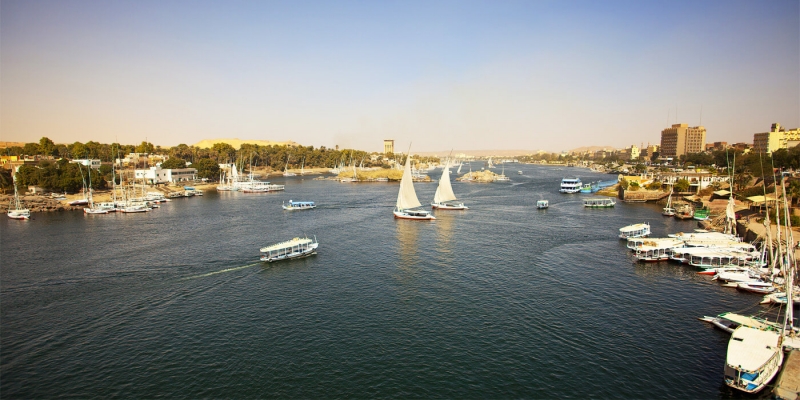 Cairo the capital of Egypt has a rich history of Islamic, Christian Coptic, and Jewish culture. This 2000 years old city is also the largest city of the Middle East and Africa. The strategical location of Cairo leading to three continents of Asia, Africa, and Europe provides this city its unique identity among Egypt destinations. Located along the shores of River Nile stretching up to 40 km from north to south, Cairo is also called Al Qahirah and is one of the most ancient cities of Egypt. Sightseeing sites in Cairo mainly consist of churches and mosques.

- Memphis and Saqqara
Memphis is the oldest capital of Egypt and is located 24 km away from Cairo. King Menes established it and contains many interesting monuments. The major attraction of this site is 13 m long massive Statue of Ramesses II that weighs 120 tones built in fine-grained limestone. The other monuments at Memphis include Temple for Embalming the Sacred Apis Bull. Saqqara is the ancient burial ground located on a desert plateau near Cairo. Attractions of this destination of Cairo are the Step Pyramid of King Zoser, Pyramids of Unas-a 5th dynasty Pharaoh and the Serapeum-Greek philosopher Circle.

- Mosques in Cairo
The major sightseeing mosques in Cairo are the mosque of Amr Ibn Al-Aas (Al-Fustat), Mosque of Ahmed Ibn Tulun, Mosque of Al-Azhar, Mosque of Sultan Hassan, Mosque of Al-Refai, The Blue Mosque and the Alabaster Mosque of Mohammed Ali. Besides this mosque site Cairo also has other Islamic sites. Among these is the Fortress of Salah-Al-Din, House of Gamal-Al-Din Al-Dhahbai and the Museum of Islamic Art (Bab Al-Khalq).

Located on the west bank of Nile River around 20 km southwest of Cairo city, Giza can be better said as the city of pyramids. This ancient city of Egypt is home to many impressive and magnificent ancient monuments of this world. Sightseeing in Giza includes numerous sacred Egyptian structures and royal mortuary like Great Sphinx, Great Pyramid of Giza and other numerous pyramids and temples.

Giza Necropolis or Giza Pyramid Complex is the major sightseeing attractions of Giza Plateau. This complex of ancient Egyptian monuments is situated about 8 kilometers inland in the desert area from Giza old town. This complex includes Pyramid of Khufu also called as Great Pyramid or Pyramid of Cheops, Pyramid of Khafre or Chephren that is somewhat smaller in size in comparison of Great Pyramid and modest size Pyramid of Menkaure. But the main attraction of necropolis is the Great Sphinx.

Besides the sightseeing attractions at Necropolis, Giza also has many other ancient world attractions of Egypt that are equally fascinated, magnificent and awestruck. However, most of them are in eroded form. 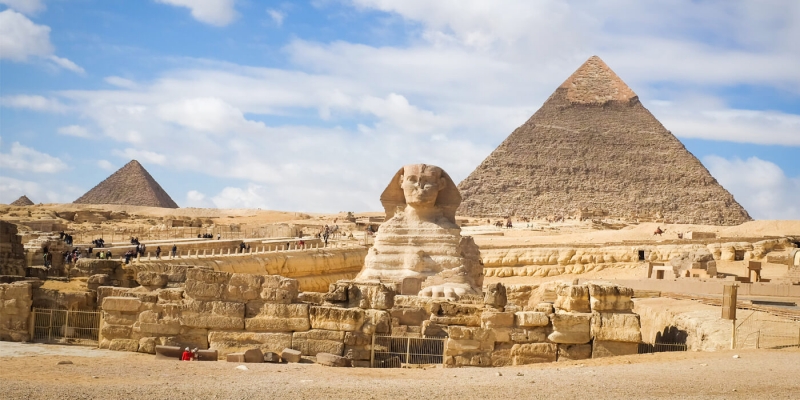 Located in the Nile Valley in the southern part of Egypt, Luxor was the dynastic and religious capital of Middle Kingdom and the New Kingdom of Egypt. From vast temples to open-air museum and from vast desert region to exotic beauty of river make this city a major sightseeing of Egypt. The primary sightseeing sites of the city are not located in the city itself but across the Nile in the Valley of Kings and the Valley of Queens.

- Valley of the Kings
The burial place of the great Pharaohs of Thebes, this valley consist of hundreds of tombs displaying the religious life in ancient Egypt through the inscriptions and scenes carved on the walls and the ceilings of the tombs. It is one of the most remarkable archeological sites of the world.

- Valley of the Queens
This burial ground contains somewhat 57 tombs including the most splendid and outstanding tomb of Queen Nefertari.

- Luxor Temple
This magnificent example of Egypt ancient structural and architectural temple art was discovered by miracle less than a year ago and it took two years to excavate this temple.

- Karnak Temple
The most important sanctuary of Ancient Egypt, this temple is one of the best and greatest architectural achievements of antiquity. This temple is a vast temple complex that displays artistic works of many Pharaohs.

- Luxor Museum
A small museum dedicated to the collection of rare impressive art pieces from prehistoric period to Mamluk period.

- The Colossi of Memnon
Two gigantic statues of the ruler Amenhotep II that once stood at the entrance of his temple complex that no longer exists.

- Deir El Bahary Temple
This elegant monument is located in the foothills of the Theban hills and is a masterpiece of Theban architecture. It was a mortuary temple dedicated to Queen Hatshepsut. 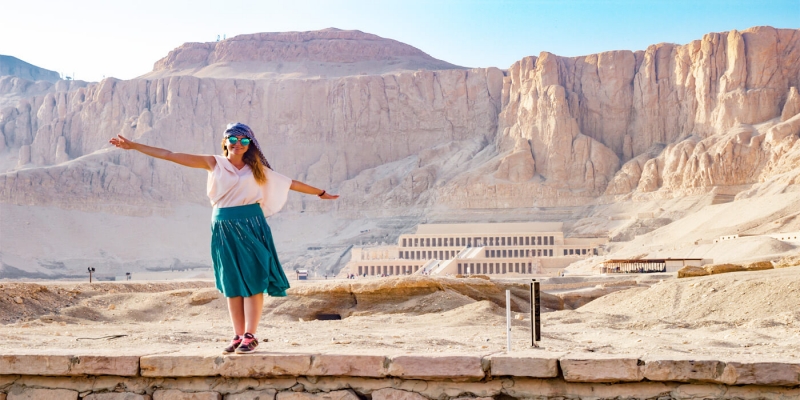 The Christmas Story and History