Volcanoes National Park is located in northwestern Rwanda, it covers around 160 kilometers squared of rainforest and encompasses five of eight volcanoes in the Virunga Mountains, it borders Virunga National Park in the Democratic Republic of Congo and Mgahinga Gorilla National Park in Uganda, it is the home to the mountain gorilla and the golden monkey.

Volcanoes National Park Rwanda is best known for mountain gorilla trekking. However, it is also rich with so many other activities to do.

Volcanoes National Park Rwanda covers around 160 kilometers squared of rainforest and is part of the Virunga volcanoes which are shared between Uganda, Rwanda, and DR Congo. It encompasses five of eight volcanoes in the Virunga Mountains.

The park was the very first national park to be created in Africa. It was first constructed in 1925, as a small area bounded by Karisimbi, Bisoke, and Mikeno, intended to protect the gorillas from poachers.

The Volcanoes National Park spends the majority of revenue on maintaining the park and conserving the wildlife, the remainder goes to the government and local projects in the area to help locals benefit from the large revenue stream generated by the park.

The main inhabitants of Volcanoes National Park are the mountain gorillas. They were the main reason the park is internationally known thanks to the work of Dian Fossey.

Moreover, the park is home to the beautiful and rare golden monkeys. They are only found in the virunga region. 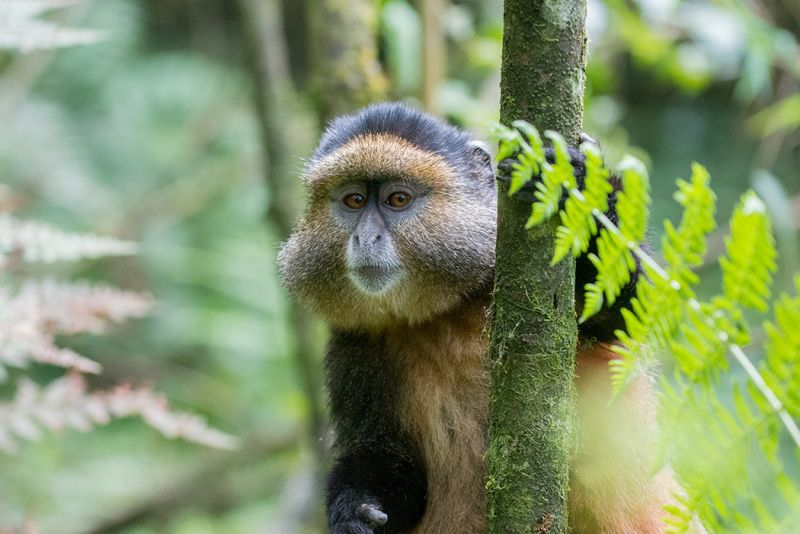 Volcanoes national park is home to over 200 bird species with a number of Albertine rift endemics for bird watching enthusiasts to enjoy. Birdwatching is the second best thing to enjoy in this park after mountain gorilla tracking and golden monkey trekking.

Things to Do in Volcanoes National Park

Gorilla tracking is the main activity to do in the park. The experience starts by the visitors arriving at the Rwanda development board (RDB) at 7 am to be distributed among different gorilla groups.

Then, you follow your guide in search of the gorillas. Your tour can take from a few minutes up to 6 minutes, depending on the location of the gorilla group.

You will have the chance to stay in the presence of the gorillas for an hour, once you spot them. The tracking takes place once in a day with only 8 individuals visiting a gorilla group.

As mentioned previously, birdwatching is the second main activity to do in Volcanoes National Park Rwanda after gorilla tracking.

The park is one of the main three Important Birding Areas in Rwanda. It is home to the rare Albertine rift endemics.

Start the tour with your guide by getting ready with  binoculars and a camera to spot some of the spectacular birds in Virunga. Your main search will be the Albertine rift endemics, the rarest and most famous species out there.

Similar to gorilla trekking, golden monkey trekking takes place in the park once a day in the early morning. However, unlike the mountain gorillas, they are active, making the trekking very engaging and interesting.

You will start by arriving at the briefing place at the pack headquarters by 7 am for brief instructions about how to behave and deal with these creatures in the wild.

You will then be divided into two groups, depending on your number, then you will start your trek led by an expert guide.

Before your briefing, you will get a chance to see the traditional dances from a local troupe and a hot cup of coffee.

Volcanoes National Park Rwanda is located in northwestern Rwanda. It is situated only 2 hours from Kigali in the north of Rwanda.

All About Casino Kigali