A huge part of Ancient Egyptian civilization, Sinai consists of a peninsula being the only part of Egypt to be categorized as part of the Asian continent. A highly visited destination among tourists, the Sinai carries so many secrets of Ancient Egyptian civilization. With a vast territory of 60000 square km, Sinai is a mix of a red desert, surrounded by gracious mountains formation and turquoise water with sand beaches.

Where is the Sinai Peninsula Located?

The Sinai Peninsula is also located in the borders of Egypt and the Gaza strip, for that reason, the Egyptian government has a heavy army and police presence in the whole of Sinai, so for travelers who choose to drive then police checkpoints are very common and it can interfere with travel times. 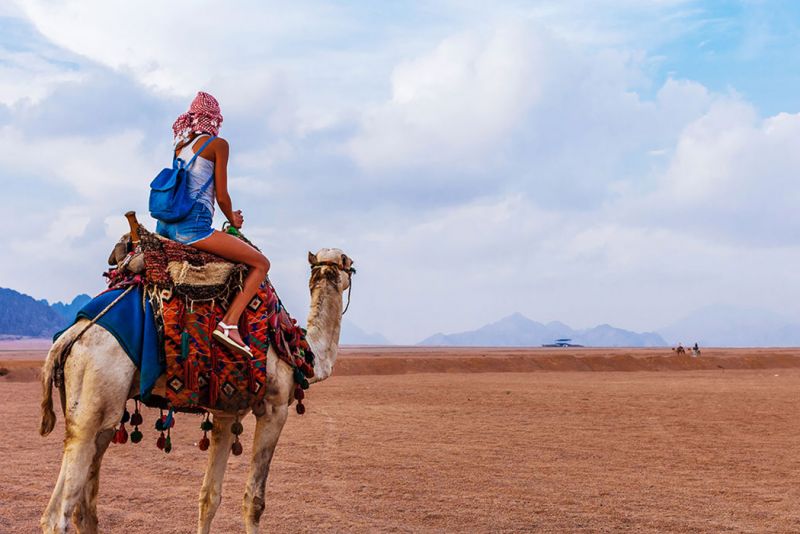 Why is it called Sinai?

The peninsula has acquired the name of Sinai in modern times due to the conclusion that a mountain located within the area nearby the Saint Catherine's Monastery is the actual Mount Sinai mentioned in the Bible, which was the place where Moses went to meditate and ended up receiving The Ten Commandments from God. For this reason, Mount Sinai receives tourists from all over the world as it is considered a sacred place for many Catholics. 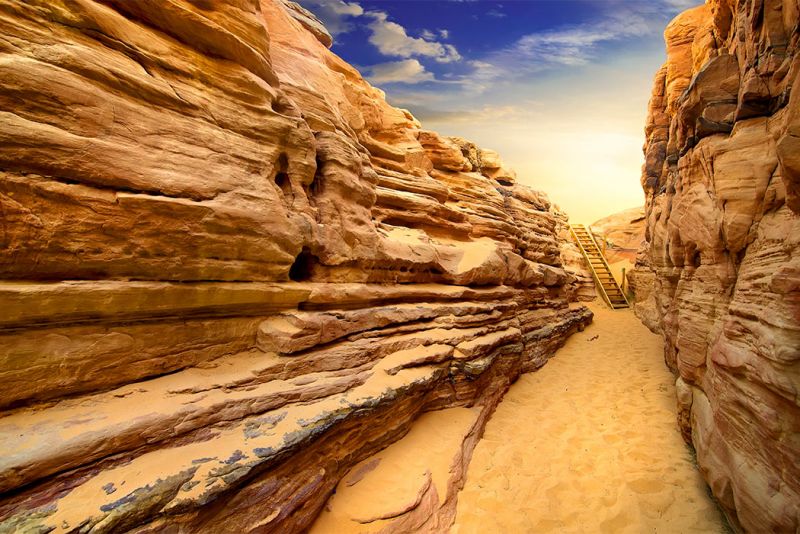 The History of the Sinai Peninsula

Having been the center of conflict between Egypt and various other Countries due to its location, the Sinai Peninsula has now been a part of Egypt since the First Dynasty of ancient Egypt. Some of its northern territories were lost in conflicts and now belongs to Syria, Lebanon, Israel, Jordan, and Palestine.

The most recent empires to have occupied the Sinai was the Ottoman Empire from 1517-1867 and the United Kingdom from 1882-1956. During the Suez crisis, Israel invaded and occupied the Sinai Peninsula, where Egypt suffered the coordinated attack of the UK, France, and Israel also known as the Tripartite Aggression which happened in 1956 and the Six-Day war in 1967. In October 1973, Egypt tried regaining control over the Sinai Peninsula launching the Yom Kippur War, known in Egypt and much of Europe as the October War. The war ended following a mutually agreed-upon ceasefire. After the peace agreement signed between Israel and Egypt in 1982, Israel then withdrew all troupes from the Sinai Peninsula and Egypt to regain full control over the Sinai. 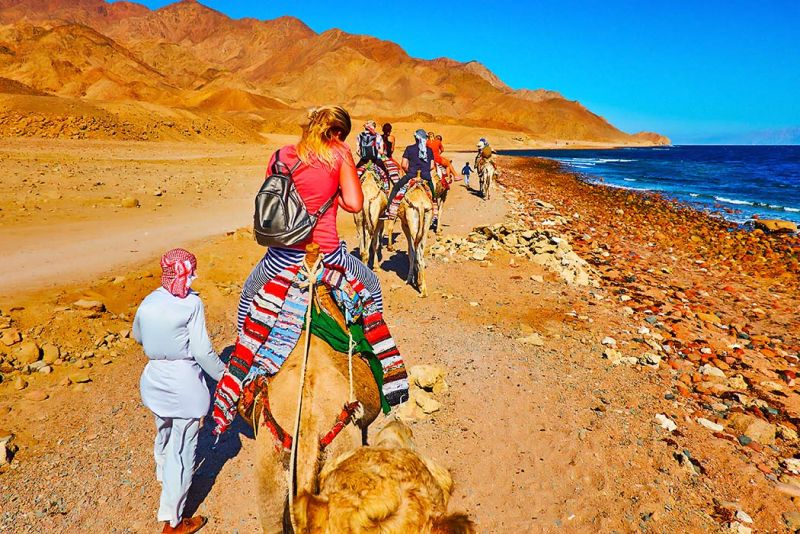 Things to do in the Sinai

The Sinai has become a huge tourist destination in Egypt over the past 20 years, with destinations that attract all types of travelers. Some of the best things Sinai has to offer are:

The Sinai Peninsula covers some of the best diving spots in the whole world. The Red Sea of Egypt is located within the Sinai Peninsula and it has a marine life to leave any world traveler experience diver speechless. The Red Sea underwater eco-system has over 300 species of corals in all colors and shapes and 1,200 species of different types of fish, which 10% of these species are not found anywhere else in the world other than in the Red Sea. Turtles, spinner dolphins, dugongs, mantas, and sharks are some of the possible encounters divers will have while diving in the beautiful waters of the Red Sea.

With one of the richest marine lives in the world with over 220 species of coral, the Ras Mohamed National Park is a marine reserve located in the sea area of Sharm El Sheikh.

Considered one of the most dangerous scuba diving sites in the world, The Blue Hole located in the relaxing Sinai city of Dahab, is not recommended for beginners divers. Consisted of over 100 meters in-depth and a tunnel, diving in the Blue Hole is the ultimate diving adventure for experience adrenaline seekers only. 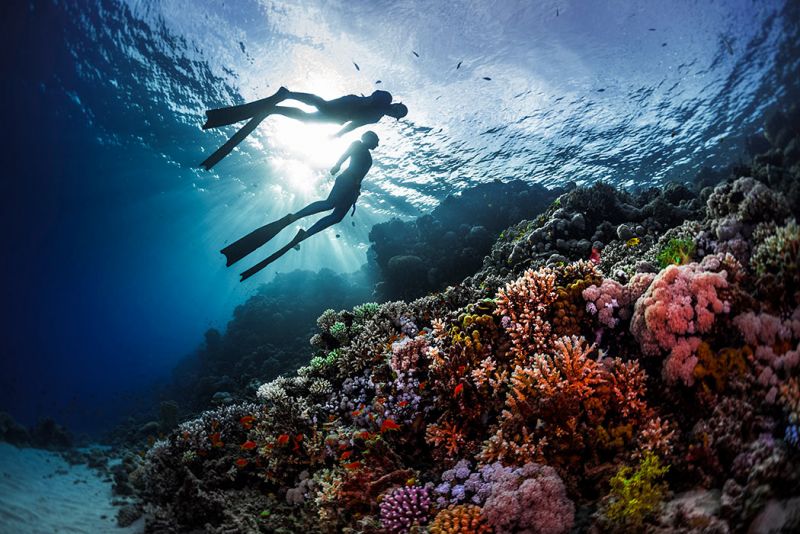 Many tourists choose to visit the Sinai every year, but not in search of the amazing beaches that the Sinai has, but in search of a spiritual experience that only the Sinai can offer. Located near the city of St Catherine, home to one of the oldest monasteries in the world, Mount Sinai is a beautiful mountain composed of red contour mountains formations with its highest peak measuring 2,285 meters high.

Mount Sinai is considered a holy site by the Abrahamic religions as this site has several mentions in the holy books of exodus, the Bible, and the Quran. Mount Sinai is known to be the place where Moses received the 10 Commandments from God.

Climbing Mount Sinai can be done on foot or by donkey. The view is like nothing you will ever see with its vast red desert horizons. Accommodation can be arranged in the St Catherine City. Tours are very common with tourists arriving all year round. 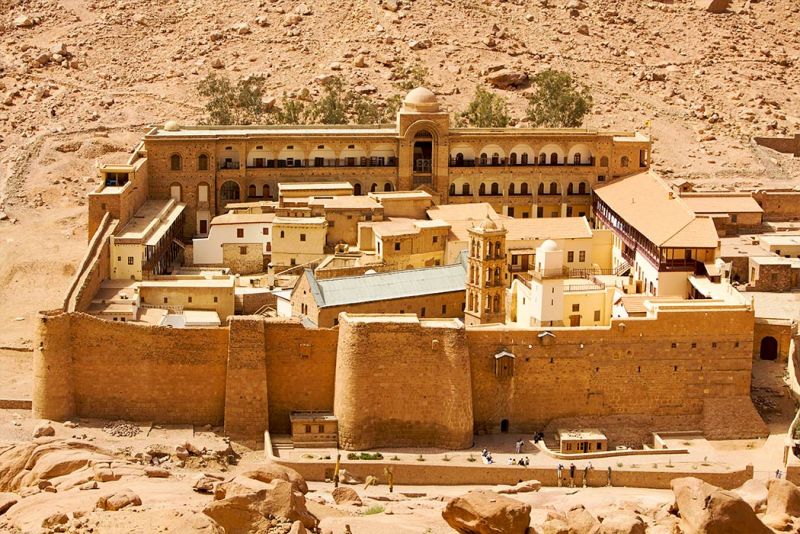 The Sinai Peninsula covers a wide range of beach resorts, in fact, some of the best resorts in Egypt, or possibly the world. With its calm crystal clear water white sand beaches, the Sinai Peninsula makes for a perfect family holiday or romantic getaway.

One of the best Lux beach resorts destinations within the Sinai is Sharm El Sheik. Sharm El Sheik is a favorite among Italians and Saudis. With so many options when it comes to beach resorts, Sharm El sheik has it all, the beach life, adventure attractions, and a strip of restaurants and clubs for most tastes. 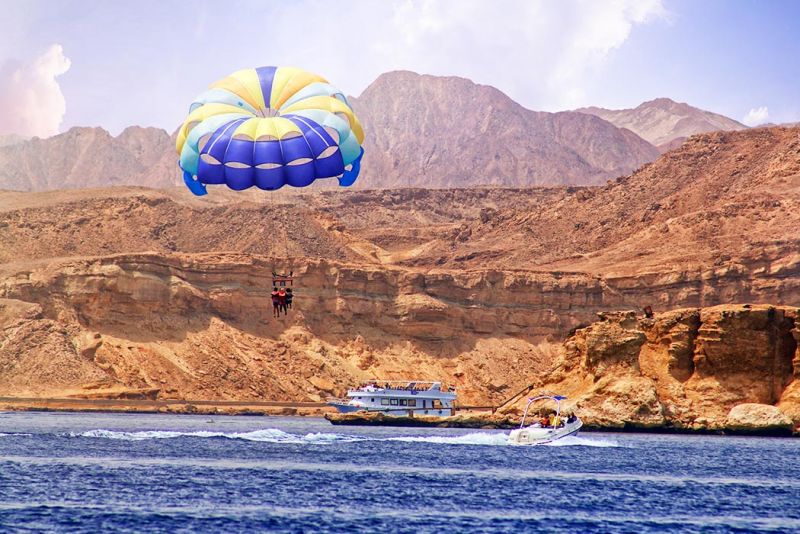 Located in the middle of the Sinai desert close to the city of St. Catherine, the Nawamis Site is the remaining of what once was a village. Nawamis is the name for the constructions made out of only rocks and the site of what looks like to be an ancient city but very little is known about the people who once habited the area. 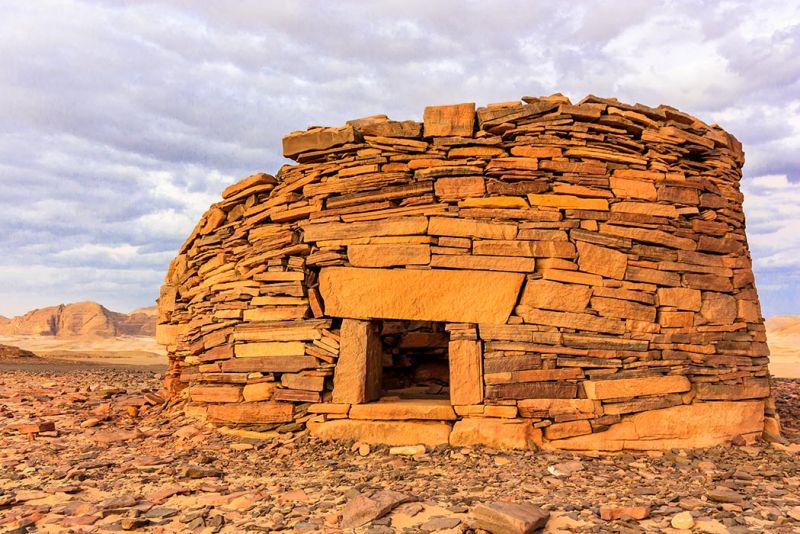 Located at about 90 km north of Dahab, the Colored Canyon is a gorgeous rock formation of multi pastel colors of red shaped like a labyrinth forming a canyon of up to 40 meters high and 800 meters long.  The Colored Canyon is an amazing hike for those who enjoy the outdoors with a mixture of the Sinai desert. 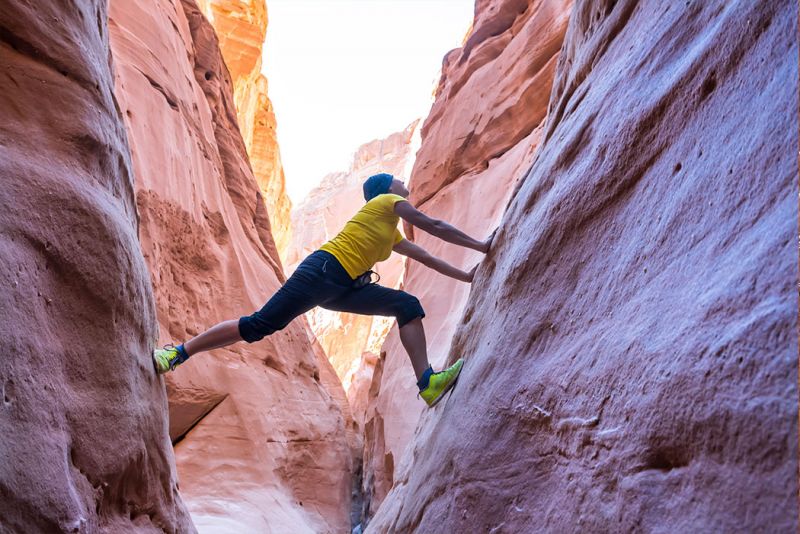 How to Reach the Sinai Peninsula?

With airports available in the cities of Taba and Sharm El Sheik, reaching the Sinai is easy by Flight or even by car. Located around an 8-hour drive from Cairo depending on where you are going within the Sinai, traveling by car is safe but aware that police checkpoints are common within the Sinai Peninsula and it might increase the time to your destination. Always carry your passport with you in case you are stopped on the road.

Most tours coming from Cairo use the service of a private shuttle and the road trip is very well appreciated as a way through Sinai and its beautiful. There is also bus service to some of the destinations in the Sinai such as Sharm El Sheik and Dahab.

Enjoy a spiritual experience in Sinai through one of our Egypt tours.