What is the Luxor Temple made out of?

The Luxor Temple was constructed of sandstone blocks from Nubia. The temple is surrounded by mud-brick walls which symbolize the separation between the world and the sacred realm of the gods. The Temple’s design during the New Kingdom exhibited a set of common design features in the construction of the temple. The Luxor Temple displays many of the features typical of temple construction known during the New Kingdom.

On the East bank of the Nile River, in the south of Egypt, the World’s Largest Outdoor Museum, Luxor city, contains one of the most beautiful temple standing. The Luxor Temple is a mark of Ancient Egyptian civilization, strikingly graceful monument in the heart of modern Luxor.

Different than other temples in Luxor, the Luxor temple was not built in adoration to a god or to a god figure of the kings and pharaohs; instead, Luxor Temple was built in dedication to the rejuvenation of kingship. Many kings might have had they crowning at the Temple of Luxor, whether crowned in reality or conceptually as in the case of Alexander the Great, who claimed he was crowned at Luxor although facts contradict appear that he had never traveled south of Memphis which is considered the modern city of Cairo.

In the Egyptian language, the Luxor Temple is known as ipet resyt which means the southern sanctuary; its main function was during the annual Opet festivals. At these festivals, the statues of Amun, Mut, and Khonsu were moved from Karnak, along the Avenue of Sphinxes, and reunited here during the inundation.

Where is Luxor Temple located?

Luxor Temple is located in the historic city of Luxor, which is the modern name of the ancient Thebes. The temple of Luxor is one of the best-preserved of all of the ancient monuments containing large amounts of structure, statuary and relief carvings that are still intact to this day, making it one of the most impressive places to visit in the Luxor area and all of Egypt. 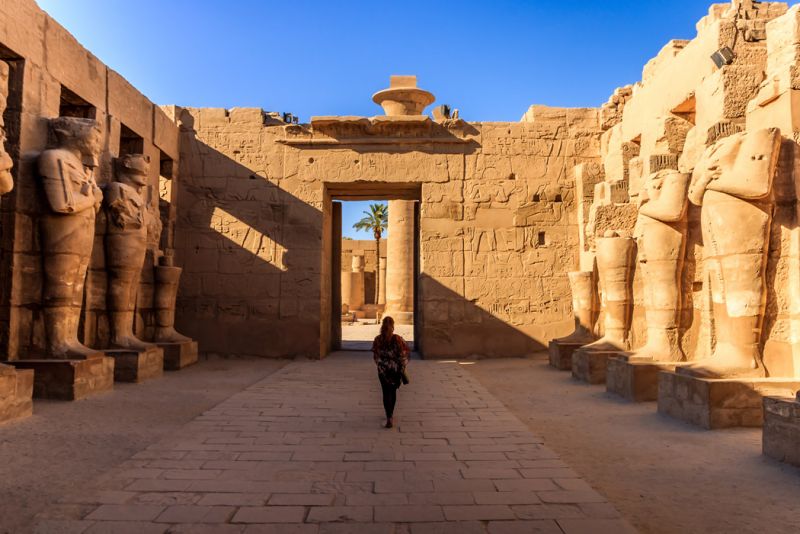 When was the Luxor Temple built?

The temple was built in 1400 BCE during Egypt New Kingdom.

Who constructed the Luxor Temple?

The Luxor temple appears to be one of the many projects that Ramesses II commissioned during his long reign. Ramesses II also repurposed many existing monuments to add to his own reputation. The statuary and carvings that decorate the temple today mainly feature Ramses II.