- When was the Temple of Esna built?

- The importance of rituals in ancient Esna temples

- The modern town Of Esna

The city of Esna is home to a few of the most famous ancient Egyptian temples. Esna was one of the most prestigious cities in Ancient Egyptian civilization, during the Roman and Ptolemaic periods their influence can be strongly noted in the temples around in this area including the Temple of Esna, also known as Temple of Khnum.

Where is the Temple of Esna located?

Located 485 miles of modern Cairo, the town of Esna sits on the west bank of the Nile. Once known by Senat in ancient Egypt, and later Latopolis by the Greeks, Esna “the city of the fish” (where the perch fish was worship as divine), is home to the Temple of Esna.

When was the Temple of Esna built?

Dedicated to the ram-headed god Khnum (the god of creation) the Temple of Esna construction started during King Tuthmosis III reign during the 18th Dynasty but the temple completed construction during the Ptolemaic period and the Roman period between 40 to 250 A.D. Inscriptions on the temple wall nominate the important figures related to the creation of the Temple of Esna, also known as temple of Khnum.

The remains of the Temple of Esna contains a hall of columns with 24 pillars beautifully decorated with lotus floral capitals and palm capitals. The walls are covered with 4 rows of reliefs, showing Ptolemaic and Roman Emperors dressed in Pharaoh costumes, offering sacrifices to the god Khnum. There are chambers on both sides of the temple entrance that were used by the priests and keepers of the temple as storerooms.

Flanking the entrance to each room, you will notice Emperor Trajan, carried in a litter by six Priests, with jackal and hawk masks of the gods. The most interesting inscriptions in this temple are the ones you will find on the roof, which is decorated with astronomical representations. On the left side of the gateway of the Temple, you can see the sky Goddess Nut, the Dog Star, Orion's belt, and Alpha Draconis (or the Dragon Star).

On the western wall of the façade of the Temple, you can see the God Horus, God of victory, and the God Khnum, dragging a net full of fish from the Nile, as well as reliefs of birds. Significantly at the foot of this representation is the last known hieroglyphic inscriptions ever recorded, completed by the Roman Emperor Dios in 250 A.D. 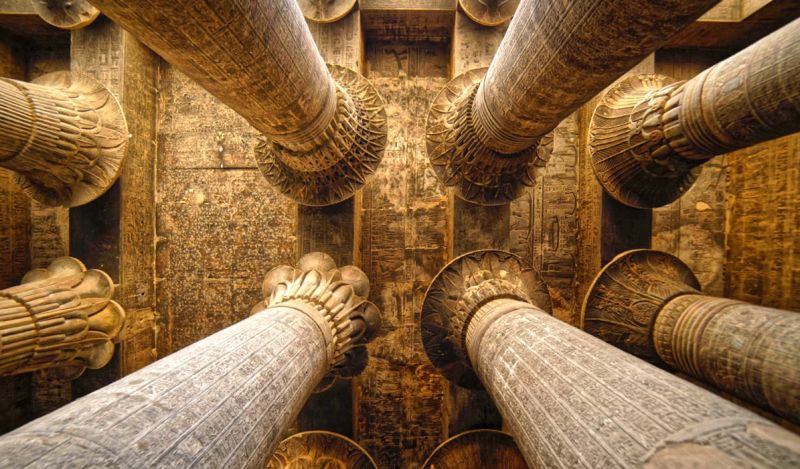 The Importance of Rituals in Ancient Esna Temples

As you enter the Temple of Esna, is easy to see their attention to detail while building this temple. Considered a sacred place of worship, the ancient Egyptians who entered the temple of Esna complied with strict rules regarding ritual purity. The inscriptions carved on the walls of the temple implies the severe rules one had to follow in order to enter the temple such as cutting their fingernails and toenails, wash their hands with a naturally occurring salt called natron, to be dressed in linen and to not have had sexual intercourse for several days.

The Modern Town of Esna

The modern town of Esna is famous among tourists for its barrage bridges built on the Nile River by the British in 1906 and the “Electricity Bridge” built in the 1990s.  Esna is usually a stop on Nile cruise tours passing by the city. Tourist usually visit the Temple of Esna while captains negotiate navigation through the lock system. Another attraction for tourists while visiting Esna it’s a lively outdoors market a couple of streets long inland from the Nile Corniche.

Come and visit the Temple of Esna and more by taking one of our Nile Cruises.
You Might Also Like

Abydos Temple | Temple of Seti I