With so many passages in the holy books referring to the country of Egypt, it is only expected that a lot of miracles and many important parts of civilization’s history have happened there. Far away from the Great Pyramids of Giza, in the middle of the red desert of the Sinai Peninsula, 2000 years ago, Moses encountered the Holy Spirit while climbing the Mount Sinai, and from then this area is considered sacred by the Abrahamic religions and therefore has attracted attention from tourist all over the world.

Mount Sinai, also known as Mount Moses and as Jabal Mousa in Arabic, is a mountain in the Sinai Peninsula of Egypt that’s said to be in the same location of the biblical Mount Sinai. Mount Sinai is sacred by Christians, Muslims and Jews, all of whom believe that God delivered his Ten Commandments to Moses at the summit of the Mountain.

Where is Mount Sinai?

It’s located 278 miles from the big Cairo metropolis in the city of Saint Catherine, South Sinai governorate region. It’s next to Mount Catherine. Mount Sinai overlooks St. Catherine Monastery, an originally Greek orthodox monastery, built between 548 and 565 one of the oldest monasteries in history. 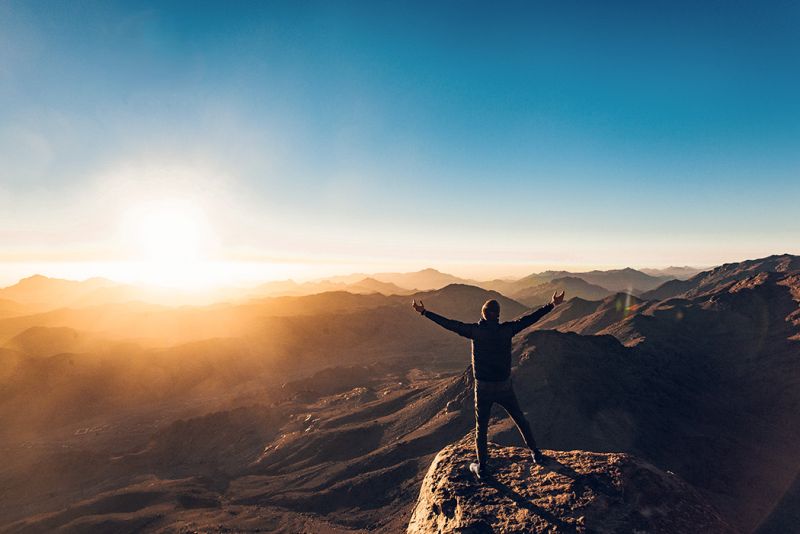 The History of Mount Sinai

Moses, who was the founder of Judaism, was born in Egypt. He was the son of a simple Hebrew slave. For nearly 400 years from 1650-1250 BC, the Hebrews were in bondage to the pharaohs and forced to work as slaves.

At the end of this period, an Egyptian priest at the service of the Pharaoh spoke of a prophecy that a Hebrew child would be born to free the Hebrews from their slavery.

After hearing that, the Pharaoh ordered every male child born from Hebrew parents to be killed by being drawn. Moses’ father in the attempt to save his son, sent little Moses adrift in a basket at the Nile river.

Moses was found by the Pharaoh’s daughter and was raised and adopted by the royal family. As he was growing up Moses was educated within the principles and traditions of the Royal family including Esoteric studies and magical traditions of the Egyptian mystery schools.

When Moses turned 40, he discovered his Hebrew origins and was revolted by the way the Pharaohs treated his people. He then killed an Egyptian overseer and fled to exile in the desert of the Sinai Peninsula.

For the next forty years, Moses became a Shepherd and while grazing his flock at Mt Horeb. He came upon a burning bush that was somehow consumed by its own flame. Moses heard a voice speaking out of the fire (Exodus 3:1-13), the voice commanded Moses to lead his people out of the bondage and return with them to the mountain.

Moses then returned to the Mt Horeb two more times to talk to God as found in the Holy Bible, Exodus 24:16-18 states: And the glory of the Lord abode upon mount Sinai, and the cloud covered it six days, and the seventh day God called unto Moses out of the midst of the cloud. And the appearance of the glory of the Lord was like devouring fire on the top of the mount in the eyes of the children of Israel. And Moses entered into the midst of the cloud and went up into the mount, and Moses was in the mount forty days and forty nights.

During his time in Mount Sinai, Moses received the Ten Commandments, Moses also received detailed instructions to build a portable box to keep the Ten Commandments, this box was called the Ark of Covenant and it was made out of wood and gold as described in the Book of Exodus. After completing the construction of the Ark of Covenant, Moses and his people departed from Mt Sinai in search of the Promised Land. 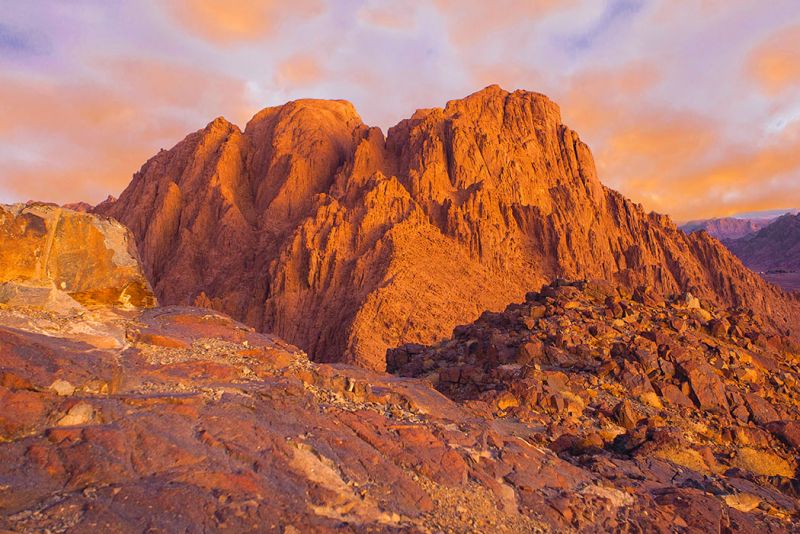 Thousands of tourists visit Mt Sinai every year. Considering its beautiful surroundings and its proximity to the Red Sea, visiting Mt. Sinai is usually a part of a combined tour to the Monastery of St Catherine or for tourists staying in the areas of Dahab, Sharm El Sheikh or even Cairo.

Accommodation is available in the small village of St Catherine if you would like to spend the night as close as to the foot of the Mt. Sinai.

Temperatures can get as low as -1 degree during the winter season so be prepared for the cold if you choose to visit between the months of December through February. Camping at the top of the Mt Sinai is also available and recommended for those in search of an adventurous and soul triggering experience.

The mountain is easy and beautiful to climb. It offers a taste of the magnificence of southern Sinai’s high mountain region. Climbing Mt. Sinai can be done on foot, by local donkeys or camels. The hike is breathtaking but requires a moderate level of fitness considering Mt. Sinai is 2,285-metres high.

Nearly all hikers take one of the two well-defined routes up to the summit: the Camel Trail or the Steps of Repentance. Both trails meet about 300m below the summit at a plateau known as Elijah’s Basin. From there, everyone must take a steep series of 750 rocky and uneven steps to the top, where there is a small chapel and a mosque; however, both the chapel and the mosque are locked.

Both the climb and the summit offer spectacular views of nearby plunging valleys and of jagged mountain chains rolling off into the distance. It’s possible to see the even-higher summit of Mount Catherine, known in Arabic as Gebel Katarina.

This is the first path and the easier route up to the summit. The start of the camel trail is reached by walking along the northern wall of St Catherine's Monastery past the end of the compound. It takes about two hours to ascend, moving at a steady pace. The camel trail is wide, clear, and slopes gently as it moves up a series of switchbacks.

Most hikers walk up, but it’s also possible to hire a camel at the base, just behind the monastery, which hikers can ride to where the camel trail ends at Elijah’s Basin.

There are a lot of kiosks on the way up to take a break and have water, tea, coffee or some snacks. 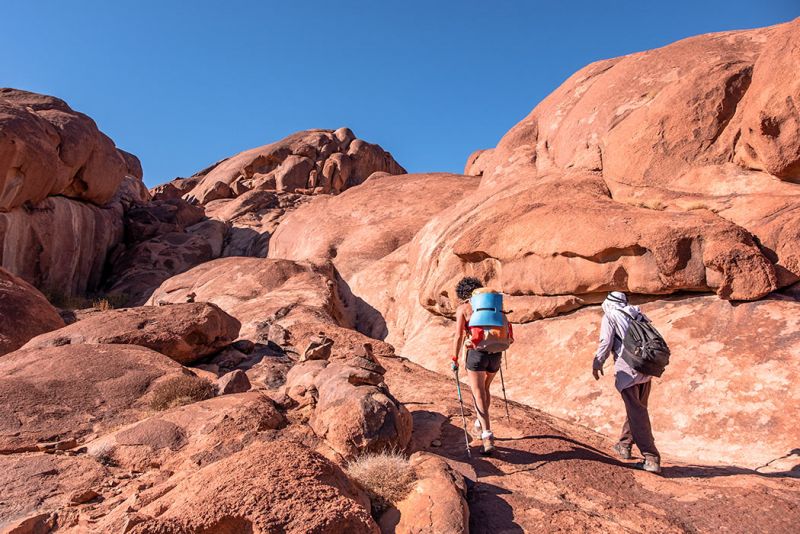 The other path to the summit from the monastery car park is the taxing 3750 Steps of Repentance. It begins outside the southeastern corner of the monastery compound. The steps were laid by a monk as a form of penance. The steps, which consist of 3000 up to Elijah’s Basin and then the final 750 to the summit – are made of roughly hewn rock, and are steep and uneven in many places. They require strong knees and concentration in placing your feet. The stunning mountain scenery along this way, though, makes this path well worth the extra effort, and the lower reaches of the trail afford impressive views of the monastery.

For those who want to try both routes to the summit of Mount Sinai, it’s easier to take the camel trail on the way up and the steps on the way back down. 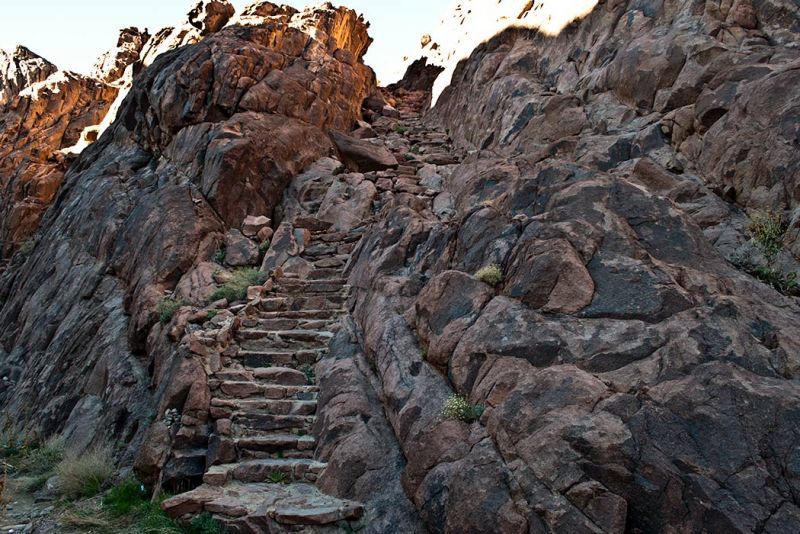 An alternative route to the summit threads up the neighboring mountain of Gebel Safsafa. You get to pass by and take in more historic sites. The start of this trail is from Wadi Al Arbain behind Al Milga village and passes by the 6th-century Monastery of Forty Martyrs and the Rock of Moses, which is believed to be the rock which miraculously produced drinking water after Moses struck it with his staff, as well as some hermit cells. The Wadi Al Arbain Trail connects to the main trail of Mount Sinai near Elijah's Basin.

Hike to the top of Mount Sinai and marvel at the incredible sunrise or sunset from the summit through one of our Egypt tours.